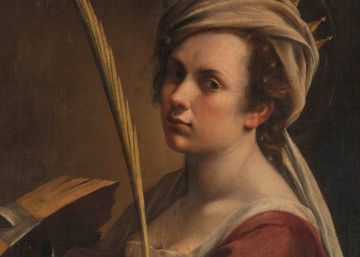 For a couple of years, coinciding with the purchase of the extraordinary Self-portrait as Santa Catalina painted by Artemisia Gentileschi (1593-1654), the National Gallery in London He has taken the leadership of the great museums in self-criticism about the absence of women in their collections. They publicly assume that they are now “much more aware of the gender gap in art history” and assure that they are engaged in a museum reconstruction that does not exclude them. The London Museum, headed by Gabriele Finaldi, deputy director of the Prado until 2015, has opened a line of research on the artists, their lack of opportunities and their many obstacles. They have a lot of work ahead of them: of the 2,300 works in the collection – from the 13th century to the early 20th century – there are only 20 works by female artists. And they only show four paintings. The first step to break this inertia is the temporary exhibition dedicated to Artemisia Gentileschi, which should have been inaugurated on April 4 and which has been postponed until when activity can resume after the health crisis.

Letizia Treves, head of Conservation of Italian, Spanish and French Painting of the 17th century, is the curator of the first exhibition dedicated to a woman in the London museum and recognizes in the Baroque painter “one of the most convincing storytellers of her time ” The exhibition focuses only on the paintings that have a secure attribution of one of the great teachers of the past, excluding the rest, to discover “the true Artemisia”, as the curator says. They had planned to show 29 works by the painter, among which some of her best-known paintings, such as Susana and the old men (1610), from Weissenstein Castle in Pommersfelden (Germany); Judith beheading Holofernit is (1611), preserved in the Capodimonte Museum in Naples, or the Self-portrait as an allegory of painting (1638), owned by Queen Elizabeth II of England. In addition, for the first time the two expressive versions of Judit and Holofernes will face each other on the same wall. In the list of works of the exhibition also appears The Birth of Saint John the Baptist (1635), belonging to the Prado Museum collection, who is willing to keep the loan, according to museum sources, waiting for the National Gallery to announce the new dates for this expected exhibition.

The chronological journey through the life and work of the Roman artist will be divided into seven chapters, from her training with her father Orazio and through “the heroines of Artemisia” (Lucrecia, Cleopatra, Clío, Bathsheba, Susana and María Magdalena). includes a set of letters discovered in 2011, portraying that sovereign woman who must make a place for herself in a world of men. “The name of a woman raises doubts until she sees her work,” he wrote to the patron, Antonio Ruffo, in 1649, at who repeats “what a woman can do.” The curator believes that they reveal the image of “a fiercely independent woman who, despite the gender limitations of the time, was determined to find success and take control of her personal and professional matters ”.

Treves highlights the artist’s dramatic power and originality when presenting traditional themes, but does not disconnect the life of the painter from her career. The chapter that has determined her biography and curriculum, since she was rescued by historiography (Roberto Longui and Anna Banti) in the middle of the 20th century, is her violation, at the age of 17. Agostino Tassi, to whom the young woman’s father had entrusted the plastic education of his daughter, was sentenced in a grotesque trial, after being tortured to demonstrate the veracity of his accusation. The challenge of the National Gallery exhibition is to highlight the artistic excellence of an artist who has been struck down by the baroque painting team due to the history of art and the cultural industry, who has preferred to recreate herself in abuse, completing a terrible cycle : rape, forgetfulness and spectacle. The trauma has been sublimated to find Gentileschi a place in this world of men. The London museum exhibition will be essential to rectify this story and recognize the pictorial significance of an artist with a prosperous career spanning four decades, in Florence, Rome, Venice and Naples.

First glance: Selection of works from the exhibition Artemisia, at the National Gallery (London).