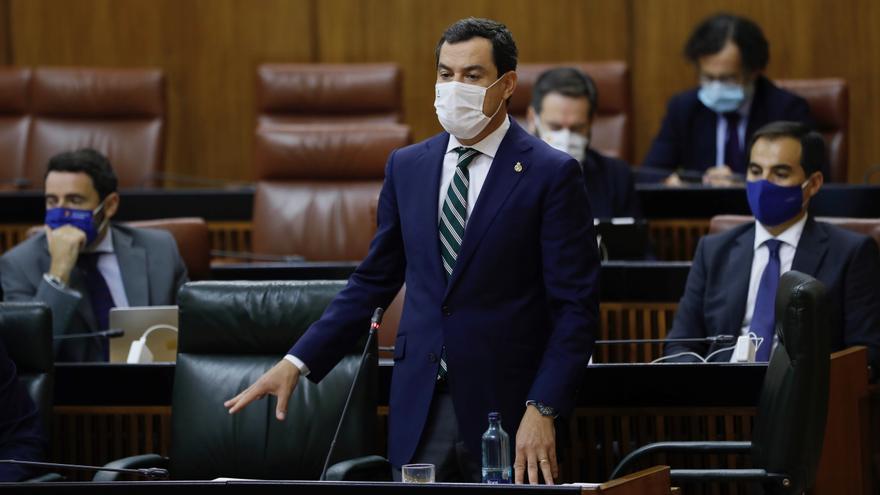 Andalusia has the most solid and unbreakable alliance of all the communities where PP and Ciudadanos govern, supported by the support of Vox. The Executive of Juan Manuel Moreno Bonilla has just signed a preliminary agreement with his far-right allies so that they withdraw the amendment to the entire 2021 Autonomous Budgets, which was debated this afternoon in Parliament.

It is the same scheme as a year ago. The Andalusian accounts go ahead without major problem, but symbolically they are approved in two stages: first, it is Vox who amortizes its role as a priority and indispensable partner, launching an amendment to the entirety to knock down the numbers of the Andalusian Government, which forces it to sit down to negotiate with a gun on the table. At dawn from Tuesday to Wednesday, this dialogue between the Andalusian leaders of Vox and the Minister of Finance, Juan Bravo, culminated, which resulted in a new political agreement – and there are three – with 65 demands that will now have to fit into the budget design that the Board had presented.

The agreement is publicized this morning by Vox itself on its social networks, a party capable of making the weight of a force with 12 deputies profitable as never before, and immediately afterwards withdraws the amendment to the entirety, paving the legislature of Moreno Bonilla until the end of the mandate. These were not just any accounts, they were marked by the stigma of the coronavirus, and therefore they have forced to park many of the electoral promises of PP and Cs (such as the massive reduction in taxes) to focus the increase in public spending on health, education and social policies.

A Budget that for the first time in eight years of austerity and fiscal consolidation policies has a free hand to exhaust a deficit of 2.2% of GDP -the ceiling recommended by the central government and authorized by Brussels-, to borrow to overcome the stagnation of the economy that has caused the pandemic, and prevent the unemployment rate from reaching 30% of the workforce, as some forecasts predict. More than 40,000 million euros, a record figure that Bravo has handled with the caution of a rigorous defender of the path of stability, with a “piggy bank” of almost 500 million unallocated for possible contingencies caused by the health crisis.

However, Vox has not topped its list of demands for anything that has to do with policies against the coronavirus, but for Canal Sur, the first highlighted point in its announcement of the agreement through Twitter. Santiago Abascal’s party has not managed to convince PP and Cs to change the name to Canal Sur to symbolize the “change of course” of Andalusian public television under the new right-wing government, but it has managed to reduce its weight significantly: the elimination of one of the three regional television channels, the reduction of 14 million euros in the budget of the public entity; that the posts of retiring personnel and the liquidation of the Audiovisual Foundation of Andalusia are not filled.

This is a hard financial blow to the already diminished financing of RTVA, which depends exclusively on capital injections from the regional Executive. Just two months ago, the Ministry of Finance approved a budget modification to inject 11 million euros from the emergency fund against Covid-19 to “ensure the viability of Canal Sur”, money that will now be withdrawn again. The battery of measures that seek to financially asphyxiate RTVA is not a novelty in the political debate, given that the final objective of Vox is the definitive suppression of Canal Sur (despite the fact that the public entity is shielded in the Statute of Autonomy ).

The agreement recovers the “breaches” of other commitments signed between the Board and Vox, and adds a series of requests more typical of micropolitics than of large budget figures. Of course, there are claims that are part of the ideological body of the extreme right: rejection of gender equality policies, belligerence with irregular immigration, linking it to crime, and especially unaccompanied foreign minors; defense of the bull, hunting and folklore, etc … Vox has advanced the list of points agreed with the Andalusian Government, before the latter makes the document itself public.

Sources of the regional executive warn that the terms in which their ally expresses himself do not appear as is in the agreement, for example, the phrase “audit the useless gender impact reports that are incorporated into any project and constitute inefficient political spending “or the” increased security in the ore centers “(” we want safe neighborhoods “). Among the points highlighted by those of Abascal also stands out the “improvement of educational concerts in Baccalaureate and FP” (a policy that the Andalusian Government itself has already initiated at its own will).

President Moreno has personally participated in the negotiation with the Vox parliamentary spokesman, Alejandro Hernández, aware of the importance of closing accounts that underpin the stability of his Government until the 2022 elections. The pact even anticipates commitments for the accounts of the next year, which would have to be approved the same month as the elections. The agreement is signed by the vice president of the Board and regional leader of Cs, Juan Marín, and the counselor Bravo. The alliance of the three rights is thus consolidated and the mere possibility that the left-wing groups, PSOE and Adelante Andalucía, would agree to the accounts of the coronavirus with this Executive is bordered.