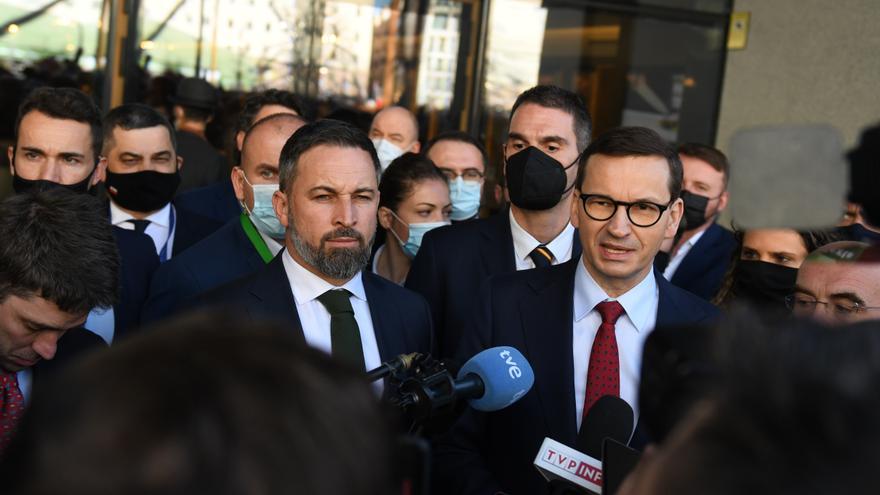 The leaders of Vox are so clear about their strategy that it is rare to see them hesitate. Iván Espinosa de los Monteros heard a question this Tuesday about an issue that has been on the front pages of the media for weeks: the threat of a possible Russian intervention in Ukraine. They wanted to know the party position of him. His first reaction was to point out that it was a difficult question. "The subject is very complex and I dare not summarize it in 30 seconds." Not that he needed much time. Later, he reaffirmed what he had said the previous week in the Foreign Affairs Committee of Congress. Ukraine's sovereignty "must be respected," he said, although he did not criticize the Russian or US governments, key players in this crisis.

The summit of far-right parties in Madrid was a good opportunity to test the caution of Vox, host of the meeting. In these cases, the least uncomfortable thing is to express a general principle and not get into more details or direct accusations. Several far-right parties have good relations with Moscow but at the same time their exacerbated nationalism prevents them from accepting that a country could see its territorial integrity violated by a more powerful neighbor.

The summit had among the invited leaders two prime ministers, the Hungarian Viktor Orbán and the Polish Mateusz Morawiecki. The latter was not going to allow the meeting to end without a clear verdict against Russian intentions. Not in vain on Sunday he wrote that "Russian neo-imperialism is making a comeback before our eyes and threatening to destabilize the EU". Supported by Abascal, the final statement accuses Russia of having put Europe "on the brink of war" with its military actions.

Immediately afterwards, Morawiecki announced that he would immediately travel to Kiev and, curiously, he did so on the same day that Orbán traveled to Moscow to meet with Vladimir Putin.

The French Marine Le Pen refused to sign the paragraph of the statement that mentioned Russia. The leader of the National Association, the former FN, has shown positions very close to those of Moscow and has gone so far as to claim that Ukraine is part of "the Russian sphere of influence". is now totally against sanctions to Russia.

your match just received a credit of ten million from a Hungarian bank with which to finance the campaign for the presidential elections in April. In 2014, got another credit of a Russian bank – with such a shaky track record that it went bankrupt – thanks to the intervention of a deputy linked to the Kremlin. French banks prefer not to do business with Le Pen and she can only find financing in Eastern Europe.

Unlike Le Pen and Orbán, Abascal did not want to make statements to the media about the results of the summit, a task that he entrusted to his vice president Jorge Buxadé. The leader of Vox is interested in talking about Latin America, but much less about the conflict in Eastern Europe, because he knows that he would have to take sides with some of his allies over others. He broadly defends Ukraine's sovereignty without endangering his relationship with Orbán, who has been in power in Hungary for nearly a dozen years.

The Madrid meeting has not served to obtain the unity of the extreme right in the European Parliament, where a single group of more than 110 deputies would see its influence increased considerably. The difficulty of reconciling ultranationalist agendas that drag historical quarrels between countries, the egocentric personality of the Italian Matteo Salvini and the little interest of the Poles of Law and Justice have not made the agreement possible, which would have interested Vox.

In what Vox does coincide completely with other far-right parties is in its Euroscepticism. He associates the EU with an alleged "offensive by globalist elites" against "Christian values". He accuses the community institutions of promoting immigration, when all the objectives of the European Commission go in the opposite direction, and subscribes to the "great replacement" conspiracy theory. It declares itself against the evolution of the EU in the last 30 years since the Maastricht Treaty.

Buxadé was able to contradict himself in a matter of seconds at a press conference this week. When explaining the agreements of the Madrid summit, he demanded compliance with the treaties in the face of the later pro-European drift, and immediately demanded with the same firmness "the primacy of national constructions over treaties". In short, Vox rejects everything the EU has achieved in recent decades.

It is what led the ABC newspaper to denounce in a Sunday editorial not the policies of Vox, but the support for its allies: "Poland and Hungary may perhaps be an example of patriotism and moral integrity in an excessively practical Europe, but above all they are two authoritarian countries whose leaders have brought them into conflict with the EU" . In an attempt not to offend the extreme right to which it does not deny its "patriotism", the newspaper does not charge directly against Abascal, but against Poles and Hungarians for trying to "violate and blow up" the architecture of the EU. Thus, the problem is not Vox, but its "bad companies".

"Vox has revamped a traditional myth of the extreme right, Hispanidad, with the neologism Iberosfera", Professor Xavier Casals has written. It tries to become a bridge between the two continents for the promotion of the most extremist ideas and "connects a broad spectrum of the European extreme right with another from America, which includes everything from Bolsonaro to Republican senator Ted Cruz."

The party believes that it has a clear path in its relations with similar Latin American parties. In the same conspiracy line about Europe, he alleges that the São Paulo Forum secretly controls several leftist governments in the area. In 2020, he launched an organization called Madrid Forum to counteract that influence and "send his criminal recipes to the dustbin of history," in the words of Abascal.

The advantage for Vox is that the right in some of those countries is not averse to joining the extreme right, as has been seen in Brazil or Peru. That has opened doors for Abascal, such as that of the OAS Secretary General, Luis Almagro, who was Uruguayan Foreign Minister with José Mugica, but who was expelled from the Broad Front in 2018 for being open to a military intervention to end the Government of Venezuela. He has also received the support of former Colombian conservative president Andrés Pastrana.

Espinosa de los Monteros described his party's presence in Latin America as a project to "give a cultural battle that has not taken place in the last twenty years." His most recent great hope has been far-right José Antonio Katz in Chile, who was defeated in the elections by Gabriel Boric. Now the objective is to support Bolsonaro in his bid to be re-elected in Brazil, although he is far behind Lula in the polls. One more defeat and only the statements of the leaders of Vox in Madrid will remain from the Iberosphere.