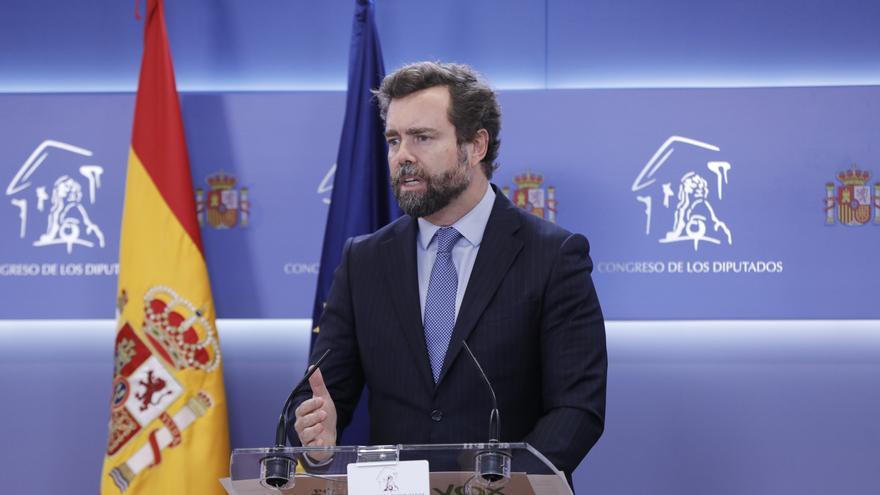 Vox’s motion of censure against Pedro Sánchez is already registered in Congress, as announced by the spokesman for the far-right formation, Iván Espinosa de los Monteros at a press conference, and such and such as Santiago Abascal had advanced on Sunday in an interview on the program ‘La España Viva’, on El Toro TV.

The Vox leader pointed out that “except for last minute news”, he will be the alternative candidate for the presidency of the Government, as it will be, although the deputy for Barcelona and candidate for the Generalitat, Ignacio Garriga, will defend it in plenary session. “It is a motion that is more justified than ever,” “we comply with our obligation by denouncing the degradation to which Sánchez has led us,” said Abascal.

In his appearance on Tuesday, Espinosa de los Monteros reiterated the motives of the far-right party to justify this motion. “No other government has accumulated so many reasons for this motion of censure. We have the worst possible government in power at the possible moment,” he assured, to sentence that with this initiative “we fulfill our responsibility in view that no other group or anyone else more wants to assume that responsibility. ”

The Vox spokesman, however, has invited “the rest of the House deputies to support this motion, especially the PP, warning:” We are at the most serious moment in our democratic history, perhaps the most serious since 1978 But we think that there are reasons for hope. It is not written anywhere that Spain is necessarily condemned, “said Espinosa, who despite everything believes that” there are reasons for hope. Spain is not especially condemned, there is a possible alternative ” . Later he assured that his group represents “the indignation and unease of all Spaniards.”

Espinosa has not wanted to reveal if they have had contacts with Pablo Casado to ask for support for the censorship against the Sánchez government. Shortly after Abascal announced the presentation of the motion in Congress in July, the PP already announced that it would not vote in favor. “They will have to explain it themselves,” the Vox spokesman said, but he was hopeful that Casado’s people would review this decision “perhaps taken hastily.”

As Espinosa has clarified, Abascal will intervene in the debate, as an alternative candidate to Moncloa who will defend the Vox alternative program in the rostrum, and the deputy for Barcelona Ignacio Garriga, who will be the one who justifies the presentation of the motion. This Tuesday Garriga also explained with the Vox spokesperson that the presentation of the initiative “against the criminal government of Pedro Sánchez” is a sign of “loyalty and responsibility to the Spanish people in the face of the national emergency in which we live.”

The deputy for Barcelona and aspiring to the Generalitat has assured that Vox wants to be remembered “in history”, “as those who did everything possible to remove the worst government, at the worst moment” and those who will explain to the Spanish “how this social-communist government was constituted by means of fraud to the electorate, which began based on the lie, which said that it was not going to agree with the heirs of ETA and with Podemos and ended up agreeing with all of them. ”