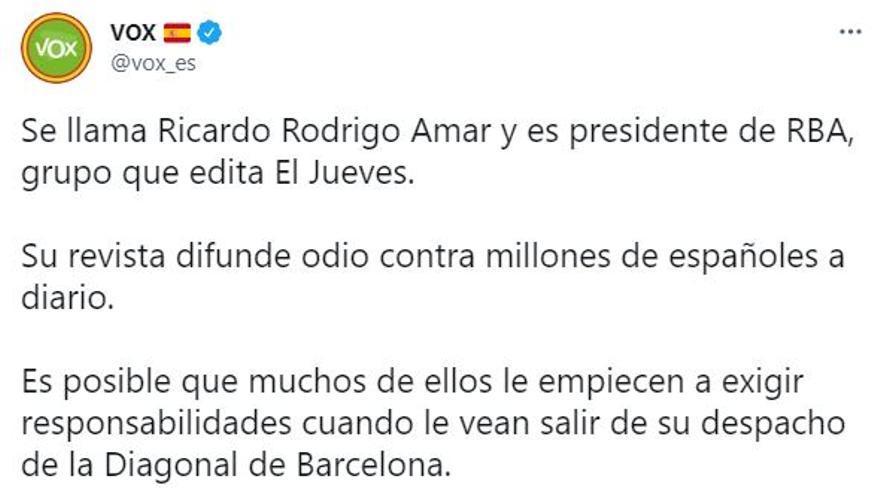 Vox has pointed out this Tuesday the founder and president of RBA, the group that publishes the satirical humor magazine El Jueves and other publications such as the National Geographic Magazine, Saber Cocinar or Lecturas. The far-right formation has directly targeted Ricardo Rodrigo for publishing El Jueves, which it has accused of “spreading hatred against millions of Spaniards.” “It is possible that many of them begin to demand responsibilities when they see him leave his office on the Diagonal in Barcelona,” they have challenged.

Vox has thus responded to a humorous publication of this magazine, which has designed collectible stickers of the ‘Voxura Gang’ – imitating the series of stickers from The Trash Gang – with characters such as Ortega Rambo de Pega, Espinosa Venenosa or Tertsch Tercer Reich. One of the far-right deputies in Congress, Carla Toscano, has responded to the magazine with: “The only garbage here is you.”

“There is nothing to knock down Private Smith, he has swallowed Napalm to end his COVID,” jokes the publication in the description of Ortega Rambo de Pega. “GARBAGE FASCIST GANG is a trademark of and is licensed by The Francos Company, Inc”, can be read at the bottom of the cards.

Its authors, Raúl Salazar and Juanjo Cuerda, have responded through Twitter to messages from the extreme right. “I am very happy that my work (with Juanjo) is making the crying fascists so angry. Thank you!” Salazar wrote.

The Spanish section of Reporters Without Borders has regretted that the editor of a medium is pointed out with the location of his work. “Vox crosses all limits with this message. Not only the ethical ones, which it has ignored for a long time, but the legal ones. It will find us on the other side,” they have expressed.