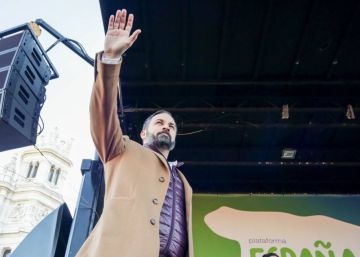 Although Vox demands the establishment of the veto of the parents (which the ultra party calls parental pin) in the entire educational system, Abascal has alluded only to child education (up to six years of age), which in Spain is not mandatory, So the voluntariness of the recipient is assumed. He has cited as an example Skolae, a pioneering coeducation program implemented in Navarra, which has been awarded by UNESCO and taken to court by Catholic associations. A reference to “sexual curiosity and children’s erotic games” was included in the card corresponding to the children’s education of this program, which its promoters justify as a mere scientific qualification and has served Abascal to talk about “corruption of minors”.

The Vox leader has been satisfied by the enthusiastic support that the president of the PP, Pablo Casado, He has given his initiative. “As soon as he is defending the right thing, we will applaud him. But we don’t know how long he will be able to keep it. There are a lot of tensions in his party so he can’t do it, ”he said at a press conference in Congress where he presented a proposal to outlaw the Catalan independence parties and Bildu.

The ultra leader has even allowed himself to correct Casado, who said that “the children of course belong to the parents”, stating that “evidently they are not the parents”, but they have parental authority and the right to choose education They get nuanced. Abascal has also assured that his party will put the parental veto on the table in negotiations with the regional government of Madrid, but has not wanted to reveal whether it will be an essential condition to support budgets, and has attributed to the “difficulties of the pact” between PP and Citizens the delay of its implementation in Andalusia. “It is they who have to clear up,” he insisted.

The budget agreement for 2020 that Vox sealed with the Andalusian Government includes, in one of its points, the “promotion and knowledge” of hunting so that students become aware of “the importance for the maintenance of our rural environment, the conservation of wildlife and natural spaces. “However, it is not foreseen that parents can refuse to have their children instilled in the virtues of hunting activity.

Actually, the so-called parental pin is only a minor element of the Vox program, which questions the role of public education as a whole. For Rubén Manso, economic guru of the party and deputy for Malaga, the Constitution does not say that the State should provide education or health, but only guarantee them. That means that private education, and not only concerted, would provide that service through the school check, which the State would deliver to families, without differentiating their income level. The value of that check would be the equivalent of the cost of a place in public education (about 5,500 euros per course), and families who could afford it should pay the price difference with private education. With this system, in which families would choose the school closest to their ideology and purchasing level, it does not seem to make sense to maintain the parental veto. The PP has agreed to introduce the school check in some of the communities in which it governs with the support of Vox, such as Murcia, but only for child education, not mandatory.