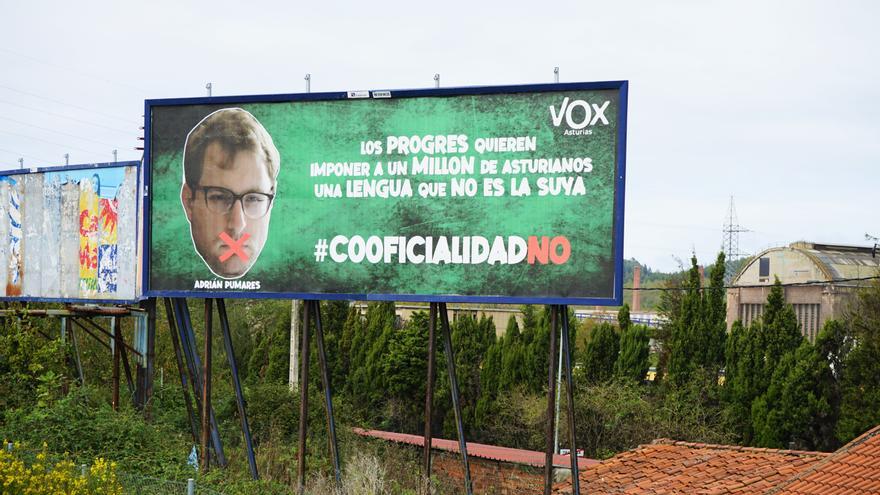 The debate over the co-officiality of the Asturian has gone from the streets to the billboards. In the midst of the negotiations for the reform of the Statute of Autonomy between the regional government of the PSOE and the rest of the forces of the Parliament of the Principality of Asturias, Vox has started its particular campaign. The far-right formation has placed in the spotlight Adrián Pumares, spokesman for Foro Asturias in the regional Chamber, whom it intends to pressure before its possible support for the proposal of PSOE, Podemos and IU to make the Asturian official, a debate that has been latent for years and that divides Asturian society.

“There is a political party that, instead of discussing matters in the General Meeting, has chosen to pay billboards with public money with my face and my mouth covered with a cross,” the deputy expresses his indignation upon seeing the large banners placed by the far-right party in the community. “Within the law, I will do everything in my power to prevent this invented language from being imposed on Asturians”, responds, for his part, Ignacio Blanco, president and spokesman of Vox Asturias in the General Meeting.

“The liberals want to impose on a million Asturians a language that is not their own. Co-officiality No.” So reads the campaign promoted by Vox Asturias, where Adrián Pumares, general secretary of the Forum, appears alone, with his mouth covered by an “x”. “In the end, that is not a question of co-officiality or non-co-officiality,” Pumares comments to elDiario.es. “It is a question of democratic respect that only has two objectives. On the one hand, that I change my personal criteria, and on the other, that someone on the street sees me on the billboards and tells me something,” concludes the FAC spokesman. Changing your criteria in this matter means changing your vote, for or against the Asturian’s co-officiality, and everything indicates that it will depend on just one.

Although historically it had been contrary to this, the PSOE-FSA of Adrián Barbón included in its statutes an issue that has historically divided the society of the Principality: the co-officiality of the Asturian. After entering the government in July 2019, Barbón had to fulfill his promise, but the pandemic removed the recognition of the llingua. Up to now.

The incorporation of Asturian and Galician-Asturian, a different language spoken in the area between the Eo and Navia rivers, is the main course of the reform of the Statute of Autonomy of Asturias. It requires a reinforced majority in the General Board to later be definitively ratified in Congress and the Senate. This reinforced majority in Asturias represents three-fifths of the Chamber, a total of 27 deputies. This limit was set with the approval of the original Statute, in December 1981.

In favor? PSOE, Podemos and IU, which have 26 deputies. Against? Popular Party, Citizens and Vox, which add 17 seats. The two that remain belong to Foro Asturias, which continues in a civil war between the supporters of its founder, Francisco Álvarez-Cascos, and those of the current president of the formation, Carmen Moriyón. The wayward deputy, Pedro Leal, has always expressed his refusal to facilitate the Asturian official status, so the balance will depend on the FAC secretary, Adrián Pumares.

Hence the Vox campaign that has not only deserved the reproach of the parliamentary groups in favor of the “yes”, but also of the PP, which has labeled the initiative as “denigrating”, and also of Citizens. “It does not seem to us at all appropriate, you cannot personally attack a deputy, or any Asturian citizen, you can have your ideology or you can not share the criteria, but what you cannot in any way is to attack a person, “said Susana Fernández, Parliamentary spokesperson for Ciudadanos in statements collected by Europa Press.

“This is the most important political decision of all democracy in Asturias,” says Ignacio Blanco, president of Vox Asturias on the reform of the Statute and the inclusion of Asturian as an official language. “No one ever had linguistic problems in Asturias and that is why I am going to do everything in my power to prevent this invention from being imposed on all Asturians,” concludes the regional spokesperson for the far-right party.

“My personal criteria will not change,” says Pumares, referring to the Vox campaign, which he does not consider a democratic party because “it does not follow the basic rules of the game of democracy.” “You have to ensure that anyone who wants to use the llingua Asturian in Asturias can do it and whoever does not want to use it should not use it. Without obligations or impositions “, he explains his position in favor of the co-officiality of the Asturian and the Galician-Asturian, although he remembers that the decision does not correspond only to him and that he does not go” on his own. ” political party that, by the way, has more votes than Vox in Asturias, “he concludes. Blanco, however, considers that Pumares’ attitude” is a forced lack of definition to take a leading role that it does not have. “” Forum is no longer important in Asturian public life “, he expands.

For practical purposes, what would this co-officiality consist of? The president of the Principality, Adrián Barbón, made it clear in the General Meeting session on Wednesday that, while the PSOE leads this process of statutory reform, Asturian will not be a vehicular language within the educational system nor will its knowledge be required for “doctors and nurses “. “It will not be a requirement to access the public function,” clarified the head of the regional Executive, who defends an idea of ​​co-officiality adapted to the sociolinguistic reality of the Principality. He also insisted that the official model will be an issue to be debated in a later regional law “among all.”

In the streets, as every year and for 34 years, about 30,000 people demonstrated last Saturday demanding the official status of the language in the center of Oviedo. This mobilization was called by the Xunta pola Defensa de la Llingua Asturiana, coinciding with this negotiation process and with the Vox campaign. “They do real atrocities. They have not done this anywhere, only here,” explains Pumares about the posters placed with his image. “The first person who warned me that I was on a fence was my father. And that gives an idea of ​​what this harassment campaign means on a personal level,” he says.