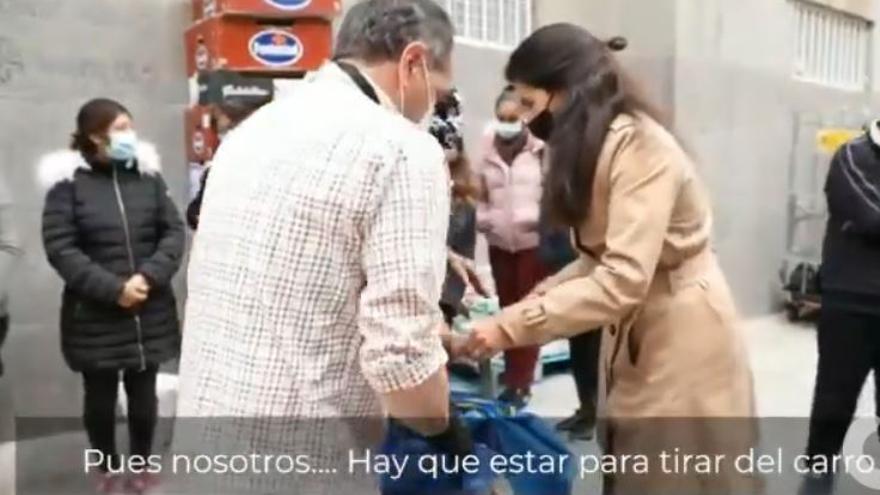 The spokesperson in the Madrid Assembly, Rocío Monasterio, has returned this Wednesday morning to one of the social aid centers in Madrid where food is distributed to families and people in vulnerable situations to make a promotional video talking with some of the neighbors.

“You may have noticed that the queue since September is getting bigger, this one and the other …. turns around. This is reality,” he exclaims in the clip, uploaded to social networks. “This is what we have left, what they do not want to tell us, they tell us what they want, because they are in their bubble and they do not realize reality, what the priority should be. They do with us what they want. “Some days we are confined, other days we are not. They play with us and do not realize that we are going little by little to poverty,” says one of these people, in conversation with Monastery, who agrees with him. The same neighbor continues to tell her about the problems she has to get her daughter’s health card and to manage unemployment or other social benefits online, under the watchful eye of another young man, all of them wearing masks.

“The political uncertainty ultimately generates a social emergency, because no one takes risks, and no one has hope about how the issue will be resolved and that insecurity has very serious consequences,” says the Vox spokeswoman in the Madrid Assembly. “They don’t see it. They should come to see it here, at these queues and this reality,” continues the Madrilenian. Monastery assures him that Vox is with them “to pull the car and get ahead. We owe it to our children,” he says, while helping several of the citizens to put the products that are being delivered into their cars.

It is not the first time that Monastery has gone to these social centers to campaign against the Government of Sánchez, and incidentally, also against that of the Community of Madrid chaired by Isabel Díaz Ayuso, a coalition with Citizens that depends on their votes.

The Madrid leader of the far-right formation last Wednesday criticized in another of those visits to a food collection center that the preliminary draft of the General State Budget (PGE) for 2021 approved by the Council of Ministers because in her opinion it will bring “more misery” and encourage much more those “hunger queues”. “Politicians are dedicated to social engineering and forget the social emergency to which they have to prioritize,” he lamented.

The Madrid leader of Vox considered that the new state of alarm for six months is a “totalitarian practice” because “they do not allow people to work, they provoke these queues of hunger in which there are waiters who work at night, hostesses who had I work at fairs or carriers. ” In his opinion, both governments with their restrictions “do not understand that this is what is ruining Madrid, Spain. It cannot be closed due to the negligence of our politicians who have failed to test, track or combat the virus. That they prioritize what you really have to prioritize and forget about political parties, “he settled in one of these recent visits with which he is campaigning for Vox in Madrid.

Shortly after, Santiago Abascal uploaded to Twitter and asked that regional or national politicians who defend the confinement against the outbreaks of Covid-19 be “locked behind bars”.

“Politicians of all stripes (regional or national) who want us to condemn the Spanish to a new house arrest should be prosecuted as subsidiary responsible for the ruin they cause in each Spanish. And they should be confined, but between bars ”. The leader of Vox has not excluded from his criticism the Executive of Madrid, which supports his training, for being during the bridges the domiciliary confinements of the citizenship before the alarming figures of the outbreaks of Covid-19 and of deaths in all Spain.