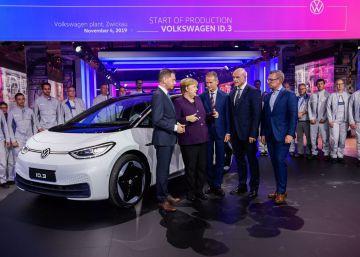 The group Volkswagen, Which leads the world's car sales, production of ID.3, its first electric mass diffusion model, has begun on Monday at the Zwickau plant, Saxony. The event was attended by Chancellor Angela Merkel, who accompanied the consortium president, Herbert Diess. And it serves as a starting signal for the summit that the German Government and car manufacturers will keep this evening in Berlin with their eyes on the electrification process and the deployment of charging infrastructures.

The Zwickau plant has received a thorough remodeling to specialize in the production of electric cars, and with an expected volume of 330,000 units from 2021, it will become in the coming months, the largest in Europe in these types of vehicles .

Merkel wants to take the opportunity to launch an ambitious electrification plan. It is expected that this Monday will meet with representatives of the sector to launch impulse measures to the electric vehicle sector. Last week he already showed his intention for Germany to have a million charging stations in 2030, compared to the 21,000 currently in the country. The plan also has incentives for the purchase of these types of vehicles. According to Reuters, the aid could amount to 5,000 euros for the purchase of the most expensive cars.

At the moment, only the ID.3 will be manufactured, a twin compact model of the VW Golf, but with 100% electric mechanics, which is already on sale from 30,000 euros, not counting government aid. The model that aspires to become the electric town following the motto of the first beetle, will be offered with three levels of autonomy, 330, 420 and 550 kilometers, according to the new WLTP cycle, more realistic and demanding.

The Zwickau plant, which until now produced the VW Passat, Saloon Golf and Golf Variant with a maximum capacity of 300,000 units per year, has undergone a profound remodeling to adapt to electromobility and specialize in electric cars, and after an investment of 1,200 million euros, will increase its production to 330,000 units.

In addition, it will be the world's first automobile factory with a neutral environmental footprint of CO2, both during the production process of cars and batteries, which will be made entirely with 100% renewable energy. And the phases that cannot be carried out with clean energies, such as the extraction of raw materials or the components of other suppliers, will be compensated with the purchase of rights and with environmental projects such as the reforestation of the island of Borneo.

Zwickau will produce six 100% electric models from 2021, the VW ID.3 and ID Crozz, a mid-size SUV, the Seat el-Born, the size of the Lion, and two other Audi models and one more VW still to define.

Angela Merkel, has claimed that Europe should have more prominence in the production of batteries for electric vehicles so that it does not yield more ground to Asian manufacturers, clear dominating of this market.

Merkel, who attended this Monday the opening ceremony of the production of the electric Volkswagen ID.3 in Zwickau (Germany), stressed that policies should be promoted to help the deployment of the charging infrastructure to make electric mobility a reality . According to the German chancellor, the country will have between seven and ten million electric vehicles in 2030, which will require up to one million recharging points.

He also stressed that the automotive industry and governments must go in the same direction in this context of transformation that the sector is experiencing, underlining that the fight against climate change will work much better without "trade wars."

For his part, the CEO of the Volkswagen group, Herbert Diess, stressed that electric vehicles are the only option for efficient mobility that can be deployed on a large scale at a "reasonable cost" and, therefore, without them it will not be possible Win the battle against climate change.

Along the same lines as Merkel, he stressed that the change to an electric mobility must be achieved as soon as possible and that it is necessary for users to have access to a "sufficient amount" of charging points. Germany will have one million public points by 2030.