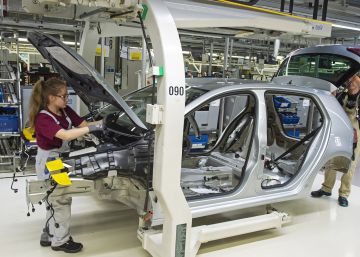 Volkswagen Group España Distribution has advised the Government on Thursday to resume aid for the acquisition of vehicles that include combustion engines, both gasoline and diesel, as a central measure in the field of mobility to combat the climatic emergency. Its president, Francisco Pérez Botello, has clarified that these helps serve to acquire vehicles with the latest technology, Euro 6, which are the least polluting emissions launched into the atmosphere. “We have to get the most out of the technologies we have,” he said in a meeting with journalists.

The measure, which has a general consensus in the sector for the fall in sales in Spain and by the car manufacturing mix in the Iberian Peninsula, it is defended under the argument that the electric vehicle is out of reach of many families for its prices and the need, according to the manufacturers, to renovate an aging park that causes large pollutant emissions

His proposal, however, goes against the policies that the last executives have made. For years that combustion engines have not received aid and, even, the last legislature came to propose from the Ministry for Energy Transition the end of the registration of such vehicles on a horizon of two decades.

Volkswagen opts, however, in two ways. One, keep the combustion car market as alive as possible to reduce emissions in the short term. And a second, more thought in the medium term, boost the presence of the electric vehicle on the streets. For the latter, Volkswagen also demands incentives. In the first case, a zero VAT levy for fully electric vehicles. And then declare high-power charging points on highways and highways as public utility.

That second route tries to solve one of the problems that pure electric vehicles have, their limited autonomy. Pérez Botello has said that currently the implementation of these points requires over ten administrative procedures to be approved by different administrations. With the declaration of public utility it would be allowed to expedite this paperwork, which could be overcome with a single step.

The executive has argued that this measure would have no economic cost to the Administration and has indicated that the future Law of Ecological Transition to be processed by the Government It could become “the best vehicle” to do so. “The fear of the interurban route is the biggest fear of the consumer,” he said about the fear of individuals to acquire electric vehicles.

Pérez Botello said that Volkswagen Group will achieve compliance the limits of the new European regulations for carbon dioxide (CO2) emissions, although he hinted that the sales of electric cars in Spain, although they can triple, will remain low and will have to be compensated by other countries. “In Europe, the Volkswagen consortium will comply with European limits. Some countries with higher volumes of electric vehicles will compensate for data from others such as Spain in which the penetration of these models is lower,” he said.

Public transportation is a safe environment against COVID-19