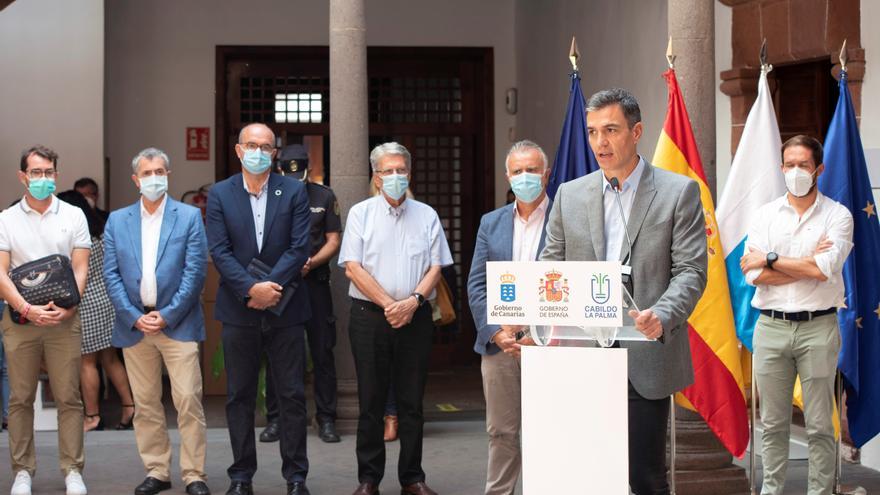 “Spain is today more than ever with palm trees and palm trees”Sánchez stressed in his message of empathy with the population of Isla Bonita. He also highlighted “the lesson in citizenship and courage which is giving palm citizenship to the eruption of the volcano “.

Likewise, the chief executive transferred the tourists who “La Palma is a safe place and we are working to keep it that way. ”

Sánchez announced that the Council of Ministers next Tuesday, October 5, will approve a Royal Decree-Law for the second phase of the reconstruction plan for La Palma for an amount of more than 206 million euros and with measures in terms of infrastructure, employment, water, agriculture, tourism and tax, among other initiatives. Ten ministries they are working on the package of measures to address the situation resulting from the catastrophe.

The Spanish president will continue visiting La Palma in the coming weeks “to make visible the solidarity of the whole of Spanish society with this island.”

“It doesn’t seem like the end is near, due to the expulsion of materials from the volcano, which is already double that of Teneguía in 1971, “said Torres, who added that next week the council of the public company Viviendas Sociales de Canarias will meet. (Visocan) to buy around 20 homes for the victims, advanced the president of the Canary Islands.

For its part, Hernández Zapata, transmitted tranquility to the population and highlighted that, fortunately, no personal injury has been recorded. He highlighted the security in the connections of La Palma with the outside by sea and air and that in 90% of the territory of La Palma “a normal life is made.”

After the press conference, Sánchez and Torres will visit the people relocated to the Princess hotel in Fuencaliente.

Today they are fulfilled 15 days from the start of the volcanic eruption on La Palma, on September 19, at 3:13 p.m., at the Cumbre Vieja volcano.

The eruptive column rises 4.5 kilometers high and the activity of the volcano remains intense, according to the National Geographic Institute (IGN).

In relation to the wash that has reached the sea, it continues with the same route and no changes in its extension are detected. However, the fajana or tongue of the sea continues to grow and now occupies 27.5 hectares.

On the other hand, the wash that emerged on Friday has not yet reached La Palma coast, but has had lateral contact with the two previous flows, explains the IGN.

The number of buildings affected by the volcano is estimated at 1,005, according to data from the European Copernicus program, after the river of lava destroyed the last irrigation connection that existed in El Remo and which supplied water to some 600 banana plantations. .

In the last 24 hours, 21 earthquakes have been registered on La Palma with an epicenter at a depth of between 10 and 14 kilometers. Two of them have been felt by the population.

The Government of Spain approved last Tuesday in the Council of Ministers a decree that collects aid of 10.5 million euros for those affected by the volcanic eruption of La Palma, aimed at providing homes and acquiring equipment that they may need in their day to day. Likewise, in the Royal Decree-Law to extend the ERTEs, a special ERTE was contemplated for La Palma.

On the other hand, the Ministry for the Ecological Transition and the Demographic Challenge (MITECO) works together with the Ecological Transition Council, the Government of the Canary Islands and the Insular Water Council of La Palma in a plan to guarantee maintenance irrigation in the banana plantations affected by the volcanic eruption on the island of La Palma. For this, two portable desalination plants will be installed in the Puerto Naos area that will guarantee an approximate flow of 6,000 cubic meters per day, the Central Executive reported today.

In addition, MITECO has ordered the transfer of a tanker from the peninsula that will make it possible to substantially increase the flow of water for irrigation. The start-up of these plants will take into account the different factors that condition this type of operations, such as, in this case, the transfer to Puerto Naos, the quality of water at the intake point, and the subsequent transfer to the network. irrigation. According to the forecasts, this operation may be in operation in a period of between ten and fifteen days, once the portable desalination plants arrive in Puerto Naos. The facilities are expected to arrive on the island of La Palma this Tuesday.

These actions are two of the first emergency measures that will be implemented and that will be complemented with new actions that will take place in the coming days. Among them, the transfer of irrigation and supply water from other areas of the island to the affected areas is foreseen, as well as the closure of the island ring. These measures are complemented by the actions that MITECO has carried out in recent weeks to support the residents of La Palma. The Ministry has made a Coordination and Observation Plane available to the Canary Islands government to monitor volcanic activity through its infrared cameras and deployed a Forest Fire Reinforcement Brigade to help the island’s residents with maintenance and ash cleaning. In addition, AEMET technicians have installed emergency instruments to monitor the volcano’s emissions.