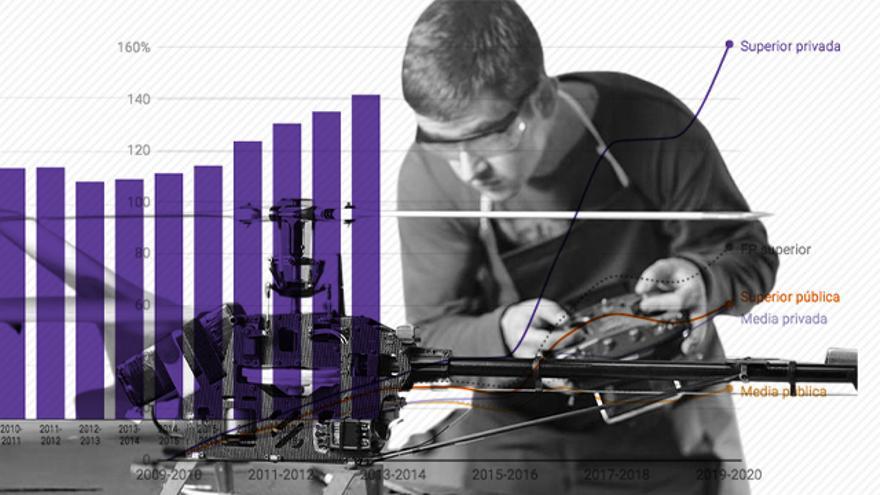 Vocational Training is privatized. The high demand for technical studies in the last decade, together with an insufficient public response, is triggering the number of students who go to private centers, whether they have a concert or not. Since 2012, the rise of the sector has been constant: it has gone as a whole (between middle and higher grades) from enrolling 23.5% of students in this training path to 30.3% in the 2019-20 academic year, the latest for which data is available. If what is arranged is excluded, what is exclusively private has gone from 4% to 15%.

Slowly, because they are large figures, but the private does not stop eating up land from the public, although it continues to be the majority. See the evolution: the students of private vocational training centers have doubled in ten years (from 120,000 to more than 240,000) while those of the public have gone from 400,000 to 568,000. and the future, with the new law and its commitment to Dual Vocational Trainingdoes not predict an improvement, some educational actors venture.

The rise is widespread in all stages and titles, although not comparable in intensity. In higher grades, the technical equivalent of university studies, private FP has risen 160% in a decade, while public FP has risen 60%. In the middle grades, an alternative to the Baccalaureate, the ratio is almost 60% in the private sector compared to 28% in the public sector. As a whole, the private has doubled (an increase of 105%) while the public has risen 43%.

This, on average. Because the situation varies a lot between communities. Private places are close to or exceed 40% in Madrid, Euskadi and Catalonia, while they remain around 15% in the Canary Islands, Extremadura, Castilla-La Mancha and Galicia.

Although with different magnitudes and some exceptions, the trend is similar throughout Spain. FP students are turning to private education. Leaving aside the Canary Islands or Murcia (where the figures are small and a small variation has caused a 200% rise in private), Madrid and Catalonia are the communities where private registrations have risen the most, exceeding 150% increase, while the public ones remain around 50%, with the (usual) exception of Madrid, whose state network increased by 29%.

Sonado was last summer when tens of thousands of young people were left without a place in the FP in Madrid and Catalonia. The public sector is growing, but not enough to absorb the demand, and the administrations approach the scarcity from different perspectives. In Catalonia there is a purpose of reverse the current. Madrid announces that it will create public places, but the budgets contemplate funds for 81,500 public placeswhen at this time it has 136,000 students and at the same time allocates an item of 18 million euros to its check program to finance student enrollment in private centers, both in Baccalaureate and in Vocational Training.

The employers of private centers Acade takes note and asks the Minister of Education, Pilar Alegría, to establish this check throughout Spain. The ministry at the moment limits itself to claiming that it has financed the creation of 42,000 places in one year and announces that it intends to create 200,000 in the coming years. If it finally chose to finance private places, it would not be the first time either: a few months ago it yielded to the communities and it was opened to use the European funds destined to create places for children to pay for the existing private ones.

And between one and the other, private spending on Education, the money that families put to finance their children's studies, grows and grows: between 2009 and 2019, the last year with available data, it went from 8,543 million euros to 11,417 million, 33% more, according to ministry data published in the State System of Education Indicators.

"What we have been demanding from the association is that there be a sufficient supply of public places, or supported with public funds, for everyone who wants them", defends Luis García, president of the Association of Vocational Training Centers FP Companies, which brings together centers public and private. "And then if someone wants to offer other things, that's great. But for institutions to land that a few years ago were unrelated to VT and see it as a business, it doesn't seem to us that this is what VT should become," explains the director of the Puerta Bonita public center in Madrid.

And that is, at least in part, what different educational actors, especially unions, have been denouncing for some time: VET is becoming a focus of investment and speculation. "During the last ten years, and in particular since the launch of the LOMCE, we have witnessed a privatization current. Having focused for many years on growth through the agreement on compulsory education (from 6 to 16 years old), they focus their attention now, and in the last decade, on looking for new privatization formulas in different niches", explained Francisco García, educational director of CCOO, in the analysis of the course that the union does every autumn.

The demand exists and the investment funds know it, which are entering one of the great educational sectors yet to be exploited due to its strong expansion. One of the latest examples has been in Malaga, where the American fund KKR bought the company Medac last summer –which had a network of 30 vocational training centers in six provinces– in which the Board's Minister of Education, Javier Imbroda, participated for 200 million euros, and in the three years prior to its sale he had been earning between 400,000 and almost 600,000 euros per year, according to the accounts reflected by infocif.es.

García also explains that this stage plays a role that goes beyond the purely educational: to serve as a bridge, as a guiding element for that student profile that finishes ESO in fits and starts, has no interest in studying, and can find in VET is a way to continue linked to studies while you mature or find a vocation. "They enroll in a cycle, they continue, and many times they end up going through that crisis, sometimes related to their personal moment, and they continue on their way, whether in high school or at the University," he explains. "And the families know that, and if they can afford it and they have no other choice, they scratch their pockets and pay those 4,000 or 5,000 euros per year for tuition." And so do the companies.

The problem is that many times the Administration also operates with a certain market logic, points out García, and does not offer more public places in families that do not have as much demand or as much immediate professional opportunity. "They have to make an effort," asks the director, "not to say that the numbers don't add up and that they only offer things with employability" to recover these students who barely get to get ESO or not even. "It is true that the squares are worth a lot of money," he concedes, but that investment pays off later.

Privatization can also be subtle, indirect. Many actors point out that the new vocational training law, which has just been approved in Congress with the only votes against the PP, can have that rebound effect. The reform, endorsed by the vast majority of political groups and educational bodies, is committed to Dual Vocational Training as a central element in the future development of this training path. This means more presence of students in companies during their studies, but also more presence and ability to influence companies in the education sector, guiding study plans or with company tutors, who will even have a voice (I do not vote ) in the evaluation of the student body.

There are other ways to privatize, as explained by the STES union in the Region of Murcia with an example from their community. "It is proven evidence that the rate of implementation of new specialties in public centers is being very low, despite the demands of educational centers. During the 2019/2020 academic year, 25 units were created in VT cycles in public centers of the entire Region while 10 units were eliminated, which meant a total creation of only 15 units. The private initiative reached almost this same figure with 13 new FP units", they expose. "The new boost to Vocational Training runs the serious risk of serving solely and exclusively the business interests of centers that offer FP", explains José Manuel Fernández, spokesman for the union.

The analysis of the distribution of students by professional VET families between public and private centers points to some trends. The private sector wins students among the most popular studies, which are growing the most, such as health, where they already exceed 51% of the total, communication, image and sound or physical activities and sports. These three families have gone from being below a third of the total number of students in private centers to around half.

On the other hand, public institutes monopolize studies such as arts and crafts, where 100% of the student body is enrolled, maritime-fishing activities or chemistry, families where they touch 95% of the students. The only large block of studies that has risen in recent years in state vocational training centers is that of safety and environment studies, which have gone from 45% to 91%.