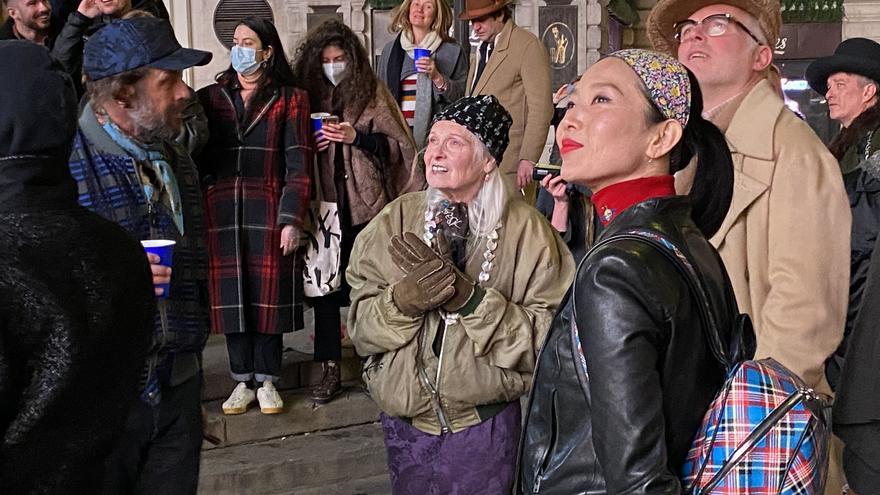 London, Apr 8 (EFE) .- Exactly at 8:21 p.m. on April 8, the advertising screens in the London square of Piccadilly Circus projected a name: that of the British designer and activist Vivienne Westwood, who celebrated her eighties birthday singing "a message to the world".

True to her style, the "queen of punk" received her 80s wearing a hat, gloves, jewelry, a bomber jacket, a purple skirt and black boots. And she did it in an intimate way, surrounded by a few family members, friends and some curious people who could not avoid staying to witness the moment.

The designer took advantage of this important day to continue with her role as an activist through "Don't buy a bomb", a production of about ten minutes made for the occasion, which was projected from the most iconic luminous screens of the British capital, and it was broadcast simultaneously online.

Piccadilly Circus came to a standstill at 8:21 p.m. this 2021 to the beat of a modified version of "Without You", from the movie My Fair Lady, but not from Julie Andrews, but from Westwood herself, who was encouraged to sing the verses of the song from the window of one of its stores.

"What a fool I have been, what a great stupid, what a stupid head. No, my reverberating friend, you are neither the beginning nor the end. There will be spring every year without you," Westwood pronounced on the screen to cheers from those present.

The video, by Circa Art, ended with a lapidary phrase: "The world must stop", together with the figure of a cat -cat, in English- as a visual allegory to the Campaign Against Arms Trafficking (CAAT), To which he has also dedicated a t-shirt, the proceeds of which will go to help the cultural community of the United Kingdom after the Covid-19.

Between applause and a "happy birthday" in chorus, the queen of punk was close to all those who came to speak with her; She gratefully received a gift from those close to her, although she preferred to let her husband, the Austrian artist Andreas Kronthaler, blow out the candles on the cake for her.

With just 80 years of age, he confessed that "the fight must continue" and therefore does not intend to stop working to change the world, either with his revolutionary clothes, or with actions like this Thursday.