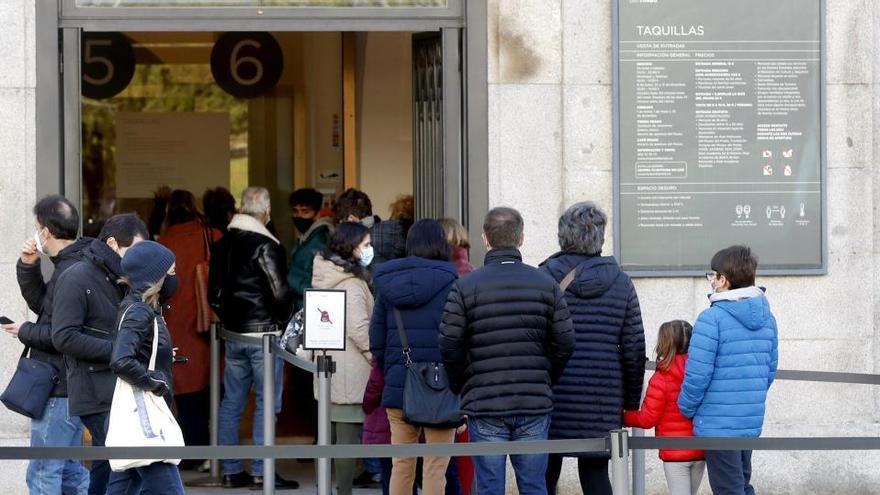 The year 2020 will go down in history as the worst for museums Spanish people: most lose an average of 70 percent of visitors to the pandemic, which translates into millionaire losses for the sector.

The fall in visitors responds to three factors: the lack of foreign visitors, which in the case of large Spanish museums account for about 3 out of every 4 visits; full closure during lockdown between March and June, and the capacity restrictions after its reopening.

Until March the figures were maintained or in some cases slightly exceeded those of 2019, but the blow of the pandemic for the art sector has been felt in a special way.

The three great art galleries of Madrid, the Meadow, Reina Sofía and Thyssen, have registered the worst decrease in their history, according to the data released this Monday. The Prado lost 73%, the Reina 71.8% and the Thyssen 67% compared to 2019.

The meadow, the fifth largest museum in the world, has gone from breaking its record in 2019 with the celebration of its bicentennial and the visit of 3.2 million people, to reduce its influx to 852,161 visitors. In addition to capacity restrictions, the museum has not yet reopened its entire itinerary.

The figures are devastating and translates into millionaire losses for all museums. The Prado estimates that it will stop earning about 19 million euros and the Reina Sofía figures the drop in collection at about four million euros (from more than 5 million to 936,060 euros last year).

The losses not only refer to the decrease in the collection of ticket sales, but also includes space rental, sponsorships or stopping the sales of its stores.

Museums in cities with a large influx of tourism such as Barcelona and Bilbao register similar data. The Guggenheim has fallen from 1.1 million to 315,908 people (73% less). In Barcelona, ​​the MNAC and the Macba registered 210,465 and 86,000 visits last year, also 75 percent less.

The data is somewhat better in the case of showrooms. For the Mapfre Foundation, with offices in Madrid and Barcelona, ​​the drop is reduced to 55% compared to 2019, and that despite having four fewer exhibitions and being forced to delay the opening of its new center in Barcelona, ​​the KBr, for several months. .

Total, its exhibitions have received about 138,000 visitors compared to 309,000 the previous year.

The eight CaixaForum and CosmoCaixa centers received 1.2 million visitors, 65 percent less than in 2019.

The feeling about how the situation will evolve in the following months is uneven among those responsible.

Some note a certain change in trend in recent months of “slight and progressive increase”, such as the Reina Sofía, which this December filled the capacity of the exhibition on Piet Mondrian, or the Guggenheim, who has seen the queues to access the museum this Christmas.

On the other hand, the Mapfre Foundation detected a greater influx to its center in Barcelona when the restrictions affected most of the leisure sector but not culture, but then it fell, and in recent weeks it has noticed an upward rebound.

Everyone agrees that inflow figures have improved substantially since the widespread reopening in June, just after the impact of the first wave and when the confidence of the visitors was much lower.

2020 resulted in a large number of exhibitions canceled or delayed and 2021 remains uncertain in this regard.

Most centers art They have presented their schedules for the coming months with a certain tendency to dive into their collections and depend less on international loans, a market that continues to be affected by the movement restrictions imposed by the second wave in several countries.