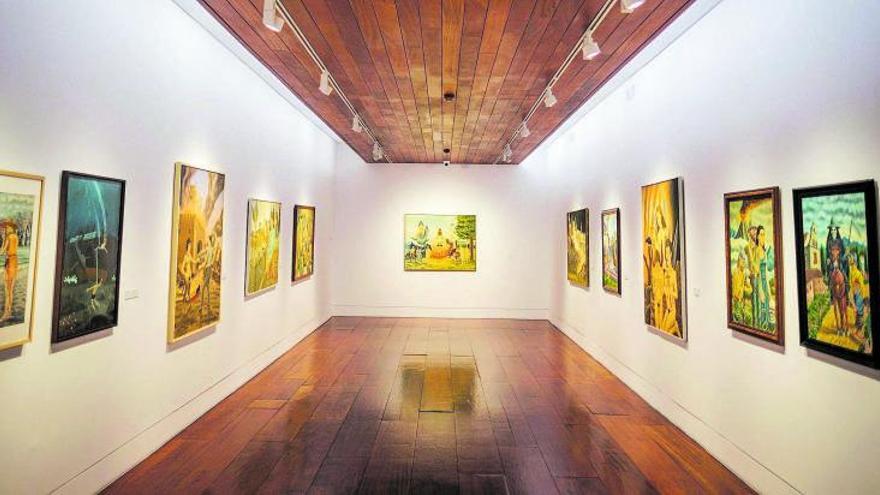 Difficult ascription artist, with a work that some have come to call "rare paintings". The artistic production of palmero JJose Martin (La Palma, 1922-1996) is as singular and unknown as the painter himself, who developed his work during the second half of the 20th century in Canary Islands. Located on the periphery of the art system, he developed his career between 1960 and 1990 on his native island, although his work never had the public knowledge and recognition it deserves. Until now.

The Cristino de Vera Foundation-CajaCanarias Cultural Space hosts the José Martín exhibition, made up of 17 works by the palmero made in the period between 1949 and 1991. The exhibition can be visited until April 16, from Monday to Friday, from 10 :00 a.m. to 2:00 p.m., and from 5:00 p.m. to 8:00 p.m., and on Saturdays in the morning. In addition, the proposal will have parallel activities, such as conferences, school visits-workshops and family workshops.

José Martín was born in Los Llanos de Aridane in February 1922. Two decades of his life passed between legal actions, among which the conviction he had to face for counterfeiting one hundred peseta bills that he made with the watercolor technique stands out. Self-taught, he used books on pictorial techniques, art history and experimentation in his studio to make watercolors during his first creative stage. He later adopted the oil painting technique that marked his career until the end of his life.

From the beginning, his proposal has been difficult to define, although experts have placed it in a naive or naïve, primitive, symbolic-surrealist, even expressionist trend. José Martín was an artist who "always produced in a way that was far removed from artistic currents," the president of the CajaCanarias Foundation, Margarita Ramos, summed up yesterday during the opening of the exhibition.

This exhibition features works from the different stages of the artist's career from La Palma and brings together themes such as Canarian nature, politics or social crises. “We are facing a singular work in which the broadest theme has a place”, summarized the curator of the exhibition Celestino Hernández who, borrowing the phrase, concluded that this exhibition is nothing more than “the unusual dream of a visionary” .

José Martín also includes images of the palmero artist and some of the banknotes he himself forged. You can also read part of the manuscript that he wrote in his last days and that now the curator of the exhibition has proposed to completely rescue for his publication.

The president of the CajaCanarias Foundation recalled that this exhibition has been a great success wherever it has traveled, first during its stay in Gran Canaria and later in La Palma. "With this proposal we intend not to lose the essence of José Martín's artistic production," said Ramos, who added the need to launch initiatives "that do justice to the figure of the artist, since in life he was not recognized as should” since he is “one of the most significant artists in the artistic history of the Canary Islands” and even added that “it is not possible to find similar references in the Archipelago”.

The president of the CajaCanarias Foundation, who recalled that the presentation of the exhibition catalog will take place on March 8, also highlighted the "quality and originality" of the palmero's work, who "is one of the great authors of contemporary art in the Canary Islands".

The Minister of Culture of the Cabildo de Gran Canaria, Guacimara Medina, stated that "it is fair and necessary to return this work to Canarian society", and that is why this ambitious project has been launched, which began its journey at the CAAM, Centro Atlántico of Modern Art in Las Palmas de Gran Canaria, between August and November 2021, and in the CajaCanarias La Palma Cultural Space, from November 2021 to January 2022. In addition, he stated that “an exhibition project of this nature places La Palma on the map, at such a delicate moment for the Island as the current one». The counselor stated that "José Martín's sensitivity is unparalleled" so "we are grateful for the opportunity to discover this artist who gives each work something different." She concluded that "hopefully the Canary Islands can now repay José Martín his gratitude with this cultural initiative, although we could not do it while he was alive."

The curator of the exhibition encouraged the public to visit this exhibition proposal because "Tenerife must know this artist". Celestino Hernández explained that this exhibition arrived in Gran Canaria with a total of 107 works by the artist from La Palma, while in La Laguna 17 can be seen since the space is smaller. However, several of these pieces are shown for the first time since the research work linked to this project continues to develop relentlessly. Hernández thanked the generosity of the providers of these works, which in some cases have been away from their usual homes for more than half a year.

In the case of the exhibition that opened its doors yesterday in La Laguna, four new works are shown, such as those called En trance or La libertad de la mujer. The curator recalled that the team has been working on this project for more than five years and throughout this time they have been able to catalog some 250 works by the author from La Palma. In this sense, he also wanted to thank the work carried out over the years by Gonzalo González, owner of the Sala Conca de La Laguna – who yesterday did not miss this inauguration in the heart of the historic center of La Laguna –, who years ago began to catalog the pieces of Martín . The curator invited the public to look at these works "with today's eyes but keeping in mind the period in which they were painted". "He was a man who lived on the edge of the world, in and out of jail and away from his neighbors," Hernández said.

José Martín's niece did not want to miss this inauguration either. Celestino Hernández explained that she, along with her parents and her husband, was the one who always supported her uncle's artistic production and "thanks to her, a good part of her work has been preserved," he revealed.

All in all, the exhibition is presented as a unique opportunity to discover this artist from La Palma, whose 25th death anniversary was celebrated last year. It is, without a doubt, one of the most unique of the 20th century in the Canary Islands, both for his personality and for his work. A reflection of his convulsive and eventful life, José Martín's production evolved with the use of plastic techniques and styles, as well as with the issues that concerned him and the ideas that he captured in these oil paintings that can now be seen in La Lagoon.

In the images on this page, various details of the opening of the exhibition 'José Martín', at the Cristino de Vera Foundation-CajaCanarias Cultural Space in La Laguna, and which is curated by Celestino Hernández. |