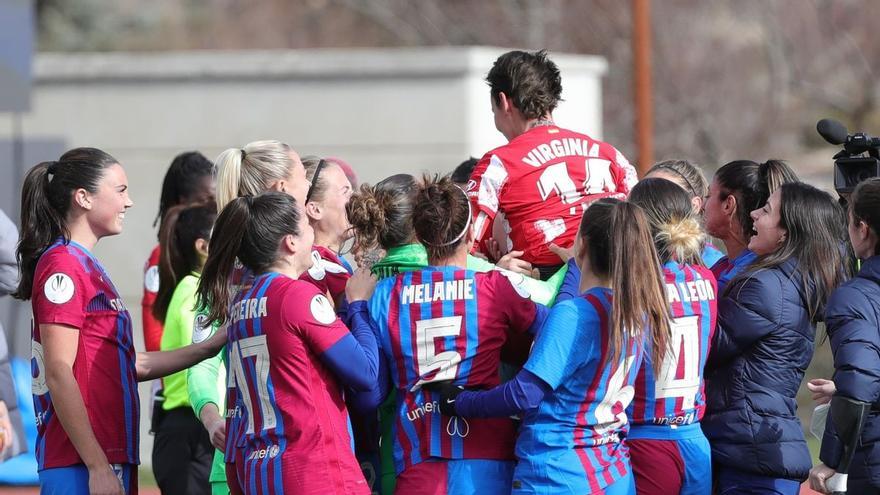 It was not the dream return because of the win, but there was a winner in the Super Cup final besides Barcelona that was Virginia Torrecilla. The Atlético player felt like a footballer again almost two years after a brain tumor was detected. His leap onto the pitch at Las Rozas was celebrated by both teams. It was just five minutes, but after two years they tasted like glory: "This has just begun and I hope that everything that comes now is up."

In May 2020, the Spanish international froze the heart of Spanish sport by announcing on social media that she had just been remove a brain tumor. Some headaches during a concentration with the Spanish team in the United States set off the alarms and after several weeks of tests the tumor was detected, which was quickly removed. Her club made the announcement, but it only took her a few minutes to celebrate on social media that he had just won the most important game of his life.

I won the most important game of my life, thanks to you! ♥️
and that you know that this is the beginning of something great, because I liked winning! 💪🏽 pic.twitter.com/0FyMhwgG0n

In all this time, the colchonera soccer player has been showing her evolution, always displaying a force and a optimism that have undoubtedly made his return more emotional. In the semifinals of the Super Cup he entered the squad, although the tight scoreline prevented him from taking the field. In the final, with everything resolved, his time came.

The crowd asked for their participation

The field of Las Rosas chanted his name asking Óscar Fernández to make him go out into the field. While she waited on the sideline for the game to stop before entering the pitch, players and members of the Barça bench staff came up to hug her and congratulate her on such an important moment. He entered the rectangle receiving the ovation from the public and heartfelt applause from her teammates and rivals. The hugs with her teammates had already happened during the warm-up. Martens scored the sixth just before he started and the seventh just after, but that was the least of it.

We have no words to describe this moment ❤️🤍

"Personally I have Virginia as if she were my family. I have known her for many years. He has had a very bad time and I've already told you that from now on everything will be very nice. We can only rejoice for her", celebrated the Barça captain excitedly, Alexia Putellas, which was added to blanket that Torrecilla received after the game, first by one team and then the other.

"Is a sweet and sour taste for the result, but I am very happy to return after almost two years. It hasn't been the lap of my dreams, but I'm super happy to be here and proud of my team. We've tried to the end, but Barça is the best team in the world and he shows it every day", Torrecilla valued, very grateful for the signs of affection from his rivals: "I have many friends at Barça, I think that in the national team we do a lot of pineapple for everything. Football has always been with me, the teammates have always been in contact. I am very grateful to Barça for everything they have done for me."