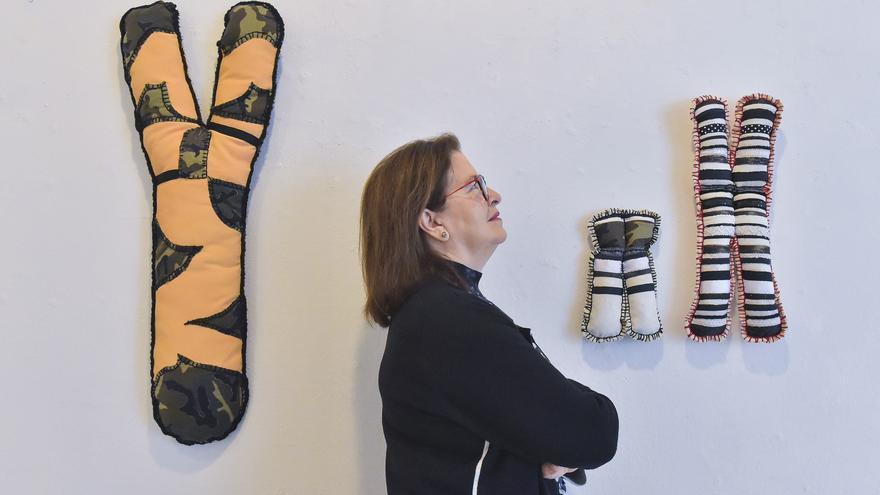 A gun is pointed at the viewer's eyebrows. Then, Nela Ochoa approaches. He dismantles the magazine and the barrel and hangs them crosswise: it is a chromosome Y. He contemplates his irregular canes, they are shortened and, perhaps, he wonders, in that brief invisible space the inability to complete the embrace of the other has been born. "Fortunately, things are changing," sighs the author of Plot, an individual bet by the Venezuelan artist that opens today at 6:30 p.m. in the Saro Leon Gallery.

"When I discovered that everything organic had DNA, the world was integrated into a single entity," declares the multidisciplinary creator. In 1995, the complete sequence of the genetic material of a living being was deciphered for the first time. giving the possibility of reading, redirecting and even experimenting with the mystery of life. The gift, reserved for the atavistic, took on human consciousness. At last, science could discover whether in the chromosomes that designate genetic inheritance there was some indication of the seed of violence. The fascination for the technological advances that "managed to make the human body transparent" through resonances or ultrasounds led her to delve into the matter.

Ochoa and the organic

His own x-rays traveled to the Amazon, he wanted to see how the aboriginal tribes reacted, and now he wants to challenge the visitor with the 16 pieces in which he studies the correlation between science, gender and nature in a language that converges and multiplies through paint, plastic, spray, the sequences of flowers or the fabrics that hang from the walls of Triana.

"There will be someone who feels uncomfortable," Nela shrugs, as she juxtaposes masculinity and violence in each of the creations. Growing up in a world where heteropatriarchy has conceived hegemonic thought, the artist takes a brain and covers it with a military cloth that is distributed along the Y-chromosome stripes. «Interference-brain-interference-gene SRY-interference-gene Y», describes.

It is faced by the cloth mural entitled MAO, takes its name from a DNA fragment that produces the protein responsible for degrading neurotransmitters such as serotonin and adrenaline, the lack of which is related to aggressive behavior. Thus, a female figure is repeated in infinity in the style of a karyotype. «In principle, women have twice this gene that tends to tolerance, although it depends on each individual, what does it mean?», suggests Ochoa. She speaks from all areas of living matter, a topic to which the Venezuelan returns again and again "because they are concentric circles that have a point of union, until this stage is finished."

The environment within the criticism of violence

The environment crosses the individual exhibition like a cry that fails to express the planetary alarm, as has been reflected in the sequence of a Canarian marine sponge in danger of extinction, Expose. "Everything has an impact," he says from the Gallery. This is an Atlantic crossing between all the waves that have carried her through her life, having at «sea as the great unifier and, if we finish with it, we finish with everything». He points to the large corporations, to the governments of the states, "who look the other way", that is, to the contempt of the elites while babies play with grenades and pistols immersed in metal cradles. bad seeds It was made in the past, but Ochoa rescues it in this dialogue that hardens the viewer's gaze.

Since 2017 he lives in Tenerife, he was part of the program Artists in Residence of the CAAM in 2019 and It begins to be known in the insular area after having achieved recognition both in the United States and in its land. The author had to leave Venezuela: "We left because they ruined everything." Violence oozes through the streets where it was born and poisons its own body, "especially coming from a [prácticamente] military dictatorship, already loaded ». Its organic matter is prey to the experiences to which it has been subjected and that respond only with a tenacious criticism of the system.