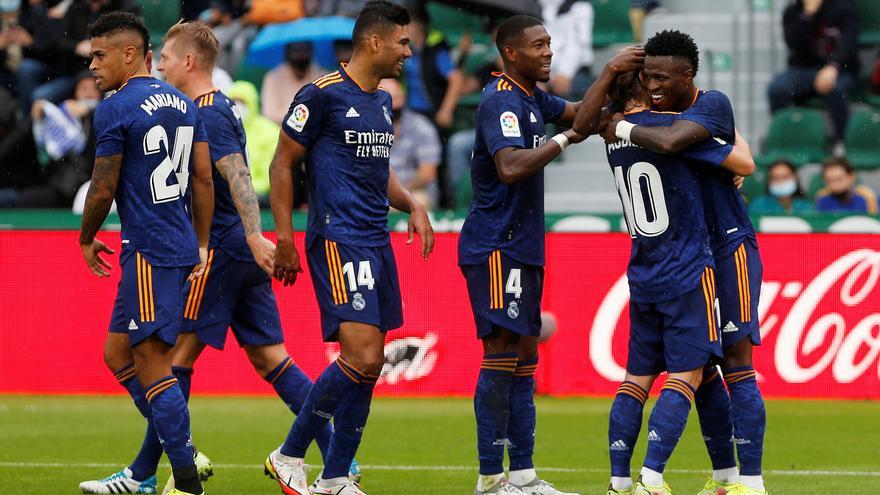 The Real Madrid continues with its siege to the leadership of the Spanish league after winning in Elche thanks to two goals by Vinicius Junior (1-2) in a comfortable but discreet game for Carlo Ancelotti’s team, which was enough with very little to attack the Martínez Valero.

The Madrid team, what lost Rodrygo through injury, he resorted to the great moment of form of Vinicius already Courtois’ appearance at key moments to stop an Elche who tried everything despite playing half an hour with one less player due to the expulsion of Raúl Guti.

Carlo Ancelotti’s team started the dominating match, monopolizing possession of the ball and threatening a distant shot from Rodrygo that Kiko Casilla took off.

Slowly Elche, very withdrawn and supportive in defensive aids, was balancing the game and exploiting each opponent’s loss of the ball to seek the counterattack.

Lucas Boyé, after a quarter of an hour, had the first local chance after a personal action that culminated with a strong shot that Courtois cleared with reflexes.

The response of Madrid, which just a few minutes before had lost the Brazilian Rodrygo through injury, could not be more forceful. Casimiro took advantage of an error by Mojica to serve a ball to Mariano, who with a touch of spur left Vinicius against Kiko Casilla, whom the Brazilian beat with a cross shot.

Elche accused the emotional impact and Madrid, now with more spaces, had the option of hitting through Mariano, who after dodging the local goalkeeper crashed the ball, now without an angle, on the side of the net.

Madrid felt comfortable in the game and allowed Elche to be reborn in attacke thanks to the pause of Pastore and the arrivals by band of Mojica, whose centers did not find successful shots.

Elche, before the relaxation of Madrid, returned to haunt the goal after a new individual action by Lucas Boyé, whose pass was not used by Lucas Pérez to beat Courtois.

Ancelotti’s team did not risk the least in search of the second goal and only had flight in attack on the left wing, in which Marcelo and Vinicius put the Elche rear in trouble, although without producing scoring chances.

Madrid started the second half with a more ambitious pose to try to finish the game as soon as possible. Marcelo, Asensio and Kross tried their luck without much success.

The arreón did not last long for Madrid, which once again lowered the pulsations of its game, which allowed Elche to grow in the game, always hooked on the talent of Argentine Lucas Boyé.

Elche, which had been around the tie in a couple of actions, suffered a blow again at its best, since Guti was sent off, in the 62nd minute, after seeing the second yellow in an action much protested by the Elche team.

The referee shows the red card for a double yellow to Raúl Guti. EFE

With a numerical advantage, Madrid refreshed its sides with the entry of Carvajal and Mendi, and Vinicius, in the 72nd minute, was in charge of sentencing the match with a new goal after a Modric serve.

With 0-2 and one more player, Real Madrid played at pleasure, although without brilliance. He fell back into relaxation and A serious defensive error allowed Pere Milla, five minutes from the end, to close the gap.

The goal gave excitement to the final stretch of the game, but Madrid resisted the last attempts of an Elche overturned in attack in its attempt to rescue at least one point.

Referee: From Burgos Bengoetxea (Basque Committee). He showed a yellow card to Raúl Guti (2) for Elche, for which he was sent off in the 62nd minute.

Incidents: Match of the twelfth day of the Santander League played at the Martínez Valero stadium in Elche before 23,010 spectators.