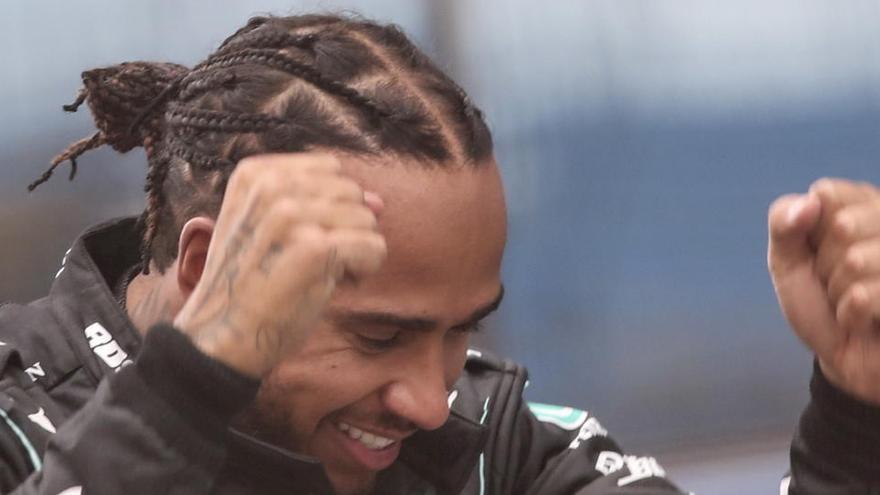 He no longer has anyone ahead. The English Lewis Hamilton equalized this Sunday, by also winning the Turkish Grand Prix, German Michael Schumacher’s record of seven Formula One World Cups. The other great record, that of triumphs, had improved it last month. The one with ‘poles’, three years ago; and the podium, in August. Hamilton is already eternal.

Born 7 January in Stevenage (Hertfordshire), Hamilton had broken Schumacher’s pole record (68) three years ago in Monza (Italy). He improved the number of victories (91) the last weekend of October in Portimao (Portugal). Before, in Montemeló (Barcelona) he had beaten the podium (155). And this Sunday he equaled, by showing off in the wet, with another victory the last great record held by the ‘Kaiser’: no ​​one ever surpasses his seven World Cups.

The British star is named Lewis Carl in honor of Carl Lewis, the great sprinter of the last century. And it is no coincidence, then, that he improves his own records quickly, aboard the triumphant Mercedes, perhaps the most powerful ship in the history of the F1.

With which this Sunday he certified the achievement of the sixth of the last seven championships. Six crowns that, added to that of 2008 with McLaren, make him seven-time world champion. Equaling Schumacher, who won the first two (1994-95) with Benetton, before chaining a winning streak of five (2000-2004) with Ferrari.

Hamilton does not miss the advantage that Brackley’s car gives him. It rises like foam. And he improves his milestones as the new son of the wind that he has become. He already has 97 ‘poles’, 163 podiums and 94 wins. And if he reaches a renewal agreement with Mercedes, given that the abrupt change of the regulations will not take place until 2022, next year he will be a clear favorite to an eighth title.

“I don’t know why people retire when they retire; but that, at the moment, does not cross my head. And one thing is very clear to me: I love driving “, explained in August 2019 Hamilton, when asked by Efe that he suggested the idea of ​​sports immortality, after signing the eighth victory of that course in Hungary and dealing the psychological blow to which it would end up being his sixth World Cup.

Lewis responded to Efe that still he was hungry for success and wanted to keep growing with a team he joined in 2013 and with whom he has signed the best streak in history, capturing the last seven constructors’ titles consecutively.

Hamilton has long been written. Of the complicated that were its beginnings; and the importance that his father, Anthony, separated from his mother, Carmen, when the child was two years old, had in his career, but also in the configuration of his character. When the term ‘bullying’ had not yet been coined, it was he who pointed it out to karate classes, as a defense against bullying.

They say that Ron Dennis, fulfilling the promise made when Lewis was 10 years old, got him into McLaren’s young driver program three years later, in 1998. After standing out in the lower categories, in 2007 he made his debut with the Woking team, forming a couple with the double Spanish world champion Fernando Alonso, with whom he maintained a clearly improvable relationship at that time.

That year – which ended like the rosary of dawn – he won four races, the first of them in Montreal (Canada). And since then, he has not stopped scoring at least one victory a year: something that only he has done in Formula One.

His first crown came in 2008, with McLaren: Black, Hamilton had become the Tiger Woods of F1, a sport that, like golf, moves gigantic amounts of money.

At the time, he claimed that he had McLaren “in his blood”, but the Woking team had a surname, that of his motorist, Mercedes; And after signing with the Brackley team, a signing in which Austrian Niki Lauda – triple world champion, who died last year – played a decisive role – the English star is writing with that team the brightest pages of his outstanding career.

That signing was questioned by those who were totally wrong: Hamilton won the World Cup a year later, in Abu Dhabi, and defended the crown in 2015, again in the capital of the United Arab Emirates.

After giving 2016 to his then partner and German ‘intimate enemy’ Nico Rosberg, he celebrated those of 2017 and 2018 in Mexico – where he equaled the five titles of Juan Manuel Fangio, the great champion of the 1950s – and that of last year in United States, where the record of the Argentine star improved.

Faithful representative of the ‘star system’, Hamilton lavishes on social networks, designs a fashion line; and without complexes she wears the most extravagant models, striking necklaces and earrings.

His skin is full of tattoos, among which his main motto stands out, that of resilience.. The one that says “Still I Rise”. Which comes to say something like “In spite of everything, I resurface.”

Hamilton reaches sporting eternity the year in which he has shown his most vindictive profile, aboard his dominant ‘silver arrow’, in black this course: against racism.

The global pandemic started a month after the murder at the hands of the Minneapolis (Minnesota) police of George Floyd, an African American whose death promoted the ‘Black lives matter’ movement, which points out the -obvious- importance of the lives of black people, supported by numerous sports stars and who found his main supporter in English in F1 .

Hamilton was the promoter of the minutes of silence, in which he also led the group that knelt during them. And in the Grand Prix of Tuscany – in Mugello (Italy) – celebrated his victory by taking the podium with a protest shirt calling for the imprisonment of “the ‘cops’ who murdered Breonna Taylor,” another African-American killed during a shooting in Wisconsin. A type of celebration that the FIA ​​soon after prohibited.

Defender of ‘clean’ energies and ecology, he did not hesitate to share that his dog Roscoe, the bulldog who accompanies him very often on the circuits, likes the vegan diet that he himself designed. The eccentric Lewis was already unique. Now he is immortal.