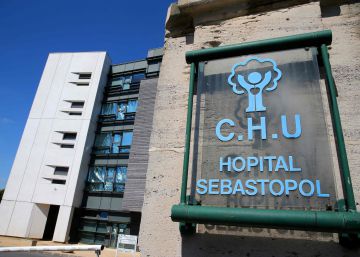 Vincent Lambert's parents throw in the towel. After years of fierce judicial battle to prevent in all possible ways that his son was disconnected from the machines that kept him alive to provide him with a dignified death, as recommended by his doctors and supported by his wife and legal guardian, they have decided not to fight anymore. According to they have announced this Monday, almost a week since the doctors stopped the care of their son, they accept now the "inevitable" death of the nurse of 42 years, quadriplegic and in a vegetative state for more than a decade, whose case has incarnated like few the debate on the right to die in France.

"This time, it's over (…) Vincent's death is inevitable", Lambert's parents and two of his brothers, all traditionalist Catholics and the only ones in this extended and complicated family who rejected the possibility of a death worthy of the nurse, who suffered a traffic accident in 2008 that left him in a state subsequently declared unrecoverable. During years, The Lamberts fought in national and European courts to the wife of his son, Rachel Lambert, who supported by the other six brothers of the nurse and one of his nephews, François Lambert, has also fought hard for the disconnection of Vincent, claiming that this would have been his wish. The problem with this case that has reopened the debate in France about the right to die with dignity is that Vincent Lambert never wrote – as most of the French have not – a vital testament where he specified his will.

The doctors disconnected Lambert last Tuesday of the machines that nourished and hydrated him artificially and at the same time subjected him to a deep sedation so that he does not suffer until his death, which is expected to occur in the next hours or days.

According to the lawyers of Lambert's parents, Jean Paillot and Jérôme Triomphe, after the last judicial attempts made last week -And that they were rejected again- "There are no more resources left." In addition, they said in another statement, "it's too late. Vincent is dying. The situation in which Dr. Sanchez has put it is medically irreversible. " Even so, according to the France Info radio station, the lawyers filed last Friday a complaint of voluntary homicide against the doctor who disconnected Lambert from the machines last Tuesday. Sanchez was questioned this weekend by the judicial police.

Euthanasia is not legalized in France. But the possibility of stopping the care of a person in an irrecoverable state is provided by the Leonetti Law – on behalf of the deputy who drafted it – of 2005. This regulation establishes that medical care "should not be prolonged with unreasonable obstinacy" and that, at the moment they seem "useless, disproportionate or with no other effect than the artificial maintenance of life, they may be suspended or not undertaken". The regulation was updated in 2016 to include in this end-of-life process a "deep and continuous sedation" so that the patient does not suffer until his death occurs.

One of the problems of this regulation, according to its critics, is the vagueness of the term "unreasonable obstinacy" that gives, they say, too much space to interpretation by doctors and judges in case, as in Lambert's, of divergence of opinions within the family.

Also the fact that a hierarchy is not established to decide, in case there is no living will, who within the family has the main voice and that, even if a patient has left his will in writing, the law does not force doctors to follow her in case of family conflict, according to the president of the Association for the Right to Dignify Dignity (ADMD), Jean-Luc Romero. "When a thing has been written, it must be respected," he said in statements to the BFM TV station, where he also claimed the legalization of euthanasia, an option that according to polls supports 96% of French people.

Speaking at the doors of the hospital in Reims, Vincent Lambert's nephew, François, one of the relatives who have fought the most for a death worthy of his uncle, also called for "defined protocols" to improve the Leonetti law and to avoid processes judicial proceedings as long as those of the Lambert case, in courts since 2013. Furthermore, he criticized, prolongs the end-of-life process of the patient too long, since it leaves it to the doctors that the patient dies in only a few days or up to two weeks. , so that they can not be accused of having committed euthanasia. "It would not be a bad thing if the law authorized that the process be faster and that there would be a protocol that would also be" unified "throughout the country and focused on" protecting "the patient, he said.

Although at first the parents had summoned for this Monday along with their lawyers a concentration in Paris, the act was finally canceled. Like other relatives, Lambert's parents made a visit to their son in the afternoon.