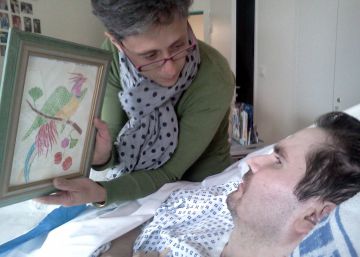 The doctor who attends Vincent Lambert, the French nurse in vegetative state for more than a decade, has announced the cessation this Tuesday of artificial feeding and hydration treatment that keeps him alive. The decision comes after last Friday, the Court of Cassation opens the way to re-disconnect life support of this 42-year-old nurse, whose case faces two parts of his family and that has become a symbol of the struggle for dignified death.

"The procedure for the interruption of the treatments will continue as of this day," said Dr. Vincent Sanchez, of the University Hospital of Reims, by e-mail to members of the Lambert family. Despite this, it would not be the first time that any judicial instance orders to resume care once removed, As the Paris Court of Appeals did a month and a half ago.

ANDLast Friday, the French Court of Cassation annulled this decision when considering that this instance had no competence. The office of lawyer Patrice Spinosi, representing Lambert's wife, said the hospital made the decision to disconnect the patient again on Friday afternoon. "We are very happy," said the defense of Rachel Lambert, who has been facing her husband's parents for years, conservative Catholics who are opposed to letting him die.

However, the attorneys for Lambert's parents have already advanced on Friday that they would not throw in the towel. "It is a political fight. When we see that a whole State unleashes its considerable human, financial, and political resources to rage against a man (…) I say that France does not deserve more to be called the country of human rights, "said Jérôme Triomphe, a lawyer linked to extreme movements. right and ultra-Catholics like Lambert's parents.