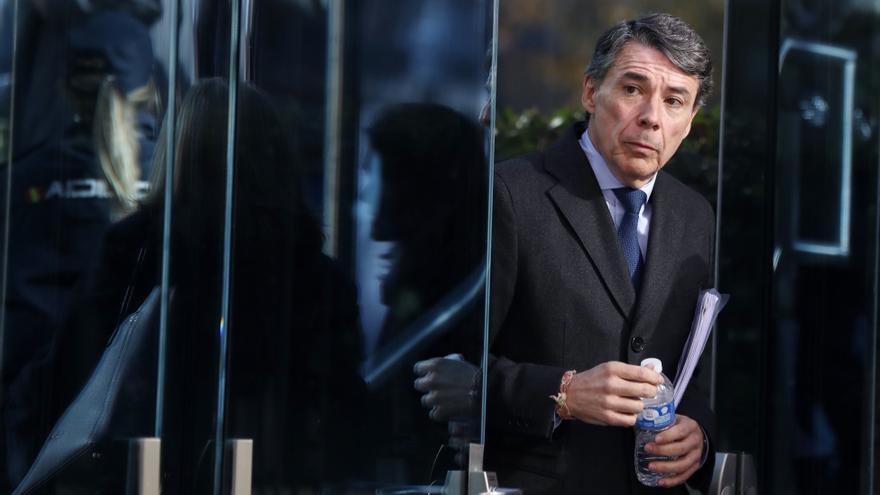 The shadow of Commissioner Villarejo, moving from one corruption case to another that conditioned Spanish politics for years, survives in the summaries of these court cases and can still influence their outcome. The former president of the Community of Madrid Ignacio González has presented his defense brief for one of the pieces of the Lezo case, and in it he denounces that everything arose from a montage commissioned by his political rivals to the now retired commissioner. The proof, he argues, is in the agendas themselves seized from Villarejo. González is not the only one requesting the annulment of the irregular participation of the ex-police officer in his cases. Something similar happens with the Ausbanc case and in that of the Pujol family. In two audios, Villarejo confesses in 2017 that the Gürtel case it did not reach the leadership of the PP thanks to its intervention.

The Anti-Corruption Prosecutor requests four years in jail for González for a crime of influence peddling in competition with another of bribery in the case of the train to Navalcarnero, some works awarded to OHL, which were never completed, and for which González would have been bitten. The judge sent the accused to trial last June. The lawyer for the former president of Madrid, Gema Martínez Galindo, requests the nullity of the proceedings in her defense brief. In it, he accuses the Civil Guard and the Prosecutor's Office of undertaking a prospective investigation based on a tip-off that, due to its errors and inconsistency, did not justify such proceedings. At the same time, he denies the crimes González is accused of.

But the surprise of his writing comes when the lawyer points out the origin of that tip. The lawyer cites the journalistic information about the commissioner and that they would demonstrate that "that anonymous source was Mr. José Manuel Villarejo, who acted on behalf of people, for now unknown, to create a police operation with false information to destroy Ignacio politically and personally. Gonzalez. To do this, the letter adds, "he used his influences in the police field, without his actions being linked to any police investigation that had been entrusted to him by his profession, but by people who wanted to remove my client from political life."

To support their claims, González's defense recovers a passage from Villarejo's newspaper, incorporated into the case against the commissioner in the National High Court. There appear an annotations that coincide with the content of the tip that started the investigation of the Civil Guard. The date of the entry is before the investigations began on an account in Switzerland from which money would have been transferred to the former president of Madrid.

The truth is that Villarejo had in his sights, in the absence of clarifying by order of whom, Ignacio González. Before their problems with the law began, the commissioner was actively involved in the end of his political career. On March 6, 2015, the Popular Party announced that Ignacio González would not be the candidate for the Presidency of the Community of Madrid, as he wished, and that the list would be headed by Cristina Cifuentes. The general secretary of the PP was María Dolores de Cospedal, with whom Villarejo had meetings since 2009.

Four days before the PP leadership dismissed González, The world He had published a note written three years before by Villarejo to his superiors informing that the politician had asked him to cover up his investigation into the origin of his luxury penthouse in Estepona, a meeting that the commissioner recorded. The world and the chain Ser published 48 hours later some extracts of that conversation that seemed to ratify Villarejo's version. Ignacio González gives a radically opposite version: the commissioner would have gone to meet him to offer him help. González's problems with justice would take another two years to erupt, with his arrest in April 2017 for corruption in the public water company Canal de Isabel II, the so-called Lezo case.

González's defense regrets that the judge of the Villarejo case, Manuel García Castellón, will take more than two years to respond to your request for representation, and to finally do so to reject it. So he turns to the news about the summary and concludes that there are more than 50 annotations by Villarejo that refer to his client or cases with which he is related. One of those annotations, dated February 18, 2013, says: "According to Asturiano, we have to give IG. I hope OK from the minister." Asturiano is, in Villarejo's agendas and according to Internal Affairs, Mariano Rajoy. IG is the name used by the curator to refer to Ignacio González.

"It is very revealing (for the purpose of understanding the manipulation that vitiates the origin of this case) that Mr. Villarejo noted in his diaries that he receives a commission to sink my client, and that in April 2015 he was handling the same number of an account in Switzerland and the same reference to the amount of 1.4 million euros that, a few months later, an anonymous source transferred to the UCO to report an alleged commission for that amount allegedly paid into that account in Switzerland ", he defends González's lawyer. The account belongs to Anglo Irish Bank and is accompanied by the annotations: "Sept. 2007 1.4 M euros. Sept. 2014 80,000".

The shadow of Commissioner Villarejo for the aforementioned cases of corruption acquired body with the arrest of the policeman. Until that moment, his participation was reduced to disturbing allusions, such as the one made by Josep Pujol Ferrusola before Judge Pablo Ruz. Josep Pujol explained in court that he had received an offer from a certain Villarejo commissioner for his father to make a statement against the you process in exchange for him blowing up the court case against the family. The offer was made in the office of Javier Iglesias, the lawyer who walks the hidden face of the PP in the courts.

With the arrest of Villarejo and one of his main collaborators, Rafael Redondo, it became known who was the lawyer who picked up Victoria Álvarez at the Atocha station and took her to the UDEF headquarters to give the statement with which the case started Pujol. Lawyer Redondo, today being investigated for belonging to a criminal organization, was able to witness Álvarez's statement without being a police officer or exercising legal representation.

In the personal statement that was rejected by the judge, the lawyer Alberto Carrillo, defender of Jordi Pujol Ferrusola, assured: "There are well-founded indications that some of those investigated, and particularly José Manuel Villarejo Pérez, acting outside of any legality and Using their status as a public official, they falsified commercial documents, obtained intimate information regarding Jordi Pujol Ferrusola and offered advantages and economic and police coverage to different witnesses to present molded statements of an allegedly incriminating sign ”.

The defense of Jordi Pujol and his seven children does not stop there. For the trial for crimes of corruption to be held in the National High Court, he has requested declassify all documents related to the parapolice maneuvers of the Ministry of the Interior under the Government of Mariano Rajoy against his political opponents, and that his police officers testify at the hearing as witnesses, including Commissioner Villarejo.

The Supreme Court has pending to resolve the appeal of Luis Pineda's defense against his sentence in the National Court to eight years in prison for extorting banking entities from the alleged consumer association that he presided, Ausbanc. At the start of the trial at the National Court, Pineda's lawyer, Miguel Durán, stated: "Villarejo mounted the operation with BBVA and, with the favorable assistance of the UDEF, they put the necessary pressure on the Prosecutor's Office to endorse the complaint and start the judicial operation ".

BBVA's hiring of Villarejo is one of the most relevant pieces of the case investigating the commissioner at the National Court. Unlike the Pujols, García Castellón has allowed the character of Pineda and his representation has recently achieved that The police officer who directed the UDEF Manuel Vázquez is summoned to testify as investigated.

In an audio seized from the commissioner, Villarejo explains to a former police officer who collaborates with him the relationship he has with the UDEF: "We give them the data, they score the goal and we get paid." The conversation dates back to 2008, when the Unit was led by José Luis Olivera, another commissioner prosecuted in the Kitchen case and historical friend of Villarejo.

So far, Villarejo's interventions have not resulted in nullities, but there are other possible effects, partly hidden, that could have determined the future of corruption cases. The most relevant of them, Gürtel. In the audios seized from the commissioner, Villarejo confesses in two conversations with different interlocutors how the corruption case exploded so that it did not reach the top of the Popular Party, including José María Aznar. This fragment belongs to one of them, registered on January 25, 2017. Iglesias is the lawyer Javier Iglesias, The Largo.

Villarejo: "Apart from being the most ideal person (Olivera) is that he has spent his whole fucking life doing male favors to these people, damn, that in 2009, this man and I were gambling that pal Rubalcaba, we were seeing him and this ( Olivera) ambushed in the fucking car so they wouldn't bite us, man, eh, for the issue of the Gürtel of the balls ... That the Gürtel could have, come on, could have sent them all to take it up the ass if it does not arrive to be for this one… and that cannot be forgotten in the fucking life! ".

Churches: "Starting with the boss… ".

Villarejo: "Starting with the boss shit ...".

Churches: "For the one with the mustaches."