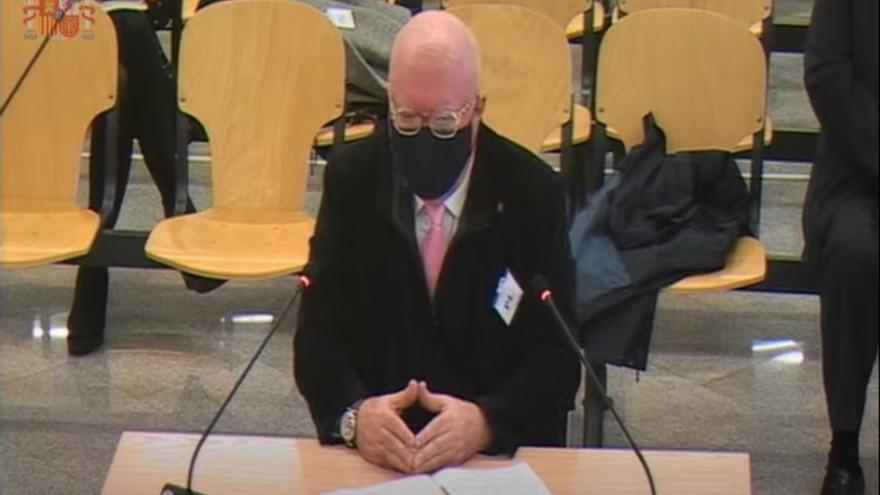 The thesis of Commissioner Villarejo according to which he always acted as an undercover agent, and on many occasions at the service of the CNI, encounters special difficulties when it comes to justifying commissions commissioned by businessmen in conflict or members of the jet. This has been revealed this Tuesday, during the second day of the statement as defendant of the commissioner in the trial for three pieces of the case that bears his name. According to Villarejo, the recordings that portray the commission of Juan Muñoz, Ana Rosa Quintana's husband, were made by intelligence service agents because the CNI "has a lot of interest in such relevant and media characters" as the television presenter.

The attribution of responsibilities to the National Intelligence Center in the crimes attributed to it was mixed in this session of the trial in the revenge that the commissioner had anticipated against the businessman Juan Muñoz for having reached an agreement with the Prosecutor's Office that passes by recognizing the commission carried out to Villarejo and that centers the so-called piece 'Painter'. Juan Muñoz's brother required a former partner to satisfy a debt and he refused on the advice of a lawyer, former judge Francisco Javier Urquía. Muñoz and his brother turned to Villarejo guided by Ana Rosa Quintana, whom the commissioner says he has been friends with for decades.

Villarejo offered the Muñoz brothers a video from 2006 in which Urquía, before being expelled from the judicial career, appeared to be using drugs and in the company of prostitutes. In addition, the Villarejo band would have recorded Urquía again in. 2017, after the commission of the businessmen, taking narcotics. Villarejo's version is that both in 2006 and 2017, the surreptitious recording of the images was carried out by the CNI. He has even gone so far as to say that the two detectives who also sit on the bench and that, according to investigators, he hired the commissioner to make the most recent video, are intelligence service agents.

The CNI was also the author of the recordings of the businessmen carrying out the commission. At the same time, as he assures of the rest of the audios incorporated into the case, they are manipulated. It was when the prosecutor Miguel Serrano asked him how it could be that the CNI collaborated with him and delivered him already manipulated recordings, months before being arrested. "I don't know if, following the usual method, they were already given me edited," Villarejo replied.

Serrano has influenced the contradictions of the commissioner. This one had assured that already by then it maintained a bitter confrontation with the CNI. "How is the CNI going to give you recordings if they already had disagreements?" The prosecutor asked. "One thing is the director [Félix Sanz Roldán], with little experience in intelligence, as has been shown later, and others with members of the Center who have risked their lives, ”the accused has escaped.

Villarejo, as he has been in charge of recalling several times, is playing seven years in prison just for the piece Painter, while Ana Rosa Quintana's husband will not foreseeably enter prison if he is finally sentenced to two. From the pact with the Prosecutor's Office, the commissioner did not exclude his "friend" Quintana, judging by the attacks he has made against her during the hearing. “Ana Rosa told me that her husband had a problem with false invoices, that he needed cash to pay for the building permit. Help him, he told me, ”said the retired police officer.

The term "husband" was used by Quintana herself, according to Villarejo, because of the anger she had with her husband, his brother and their father. “And I, idiot of me, throw my friends' problems into my backpack. Here the issue is very clear: what prodest, who benefits. What did I earn. Because my friend Ana Rosa asked me, as she has asked me for many things. And I regret that due to the current situation I cannot because I would have liked him to appear ”, he said, in relation to the illness that keeps the presenter off.

With the thesis of "favor" to his "friend" Ana Rosa Quintana, Villarejo tries to deny that there was a commission in exchange for 20,000 euros, as it appears in the recordings. Among other favors that he would have done to Quintana, Villarejo has not missed the possibility of remembering the plagiarism of a book by the presenter that his ex-brother-in-law David Rojo would have actually written.

Regarding the participation of the CNI, Villarejo continued in his line: the Intelligence service had an interest in helping Ana Rosa Quintana because she knew of an alleged 'Operation Gamba' to attack Queen Letizia through her alleged attacks with a third person, as well as some kind of relationship that the Telecinco presenter had in the past with the current Prime Minister. Villarejo did not specify more and the prosecutor has remained faithful to ignore all the questions introduced by the commissioner that are not related to the facts to be proven.

"You don't play with your children"

Villarejo has issued a warning on several occasions in the direction of the marriage of Juan Muñoz and Ana Rosa Quintana: “You don't play with your children. It seems to me a mafia, gangster attitude ”. The commissioner alluded to Muñoz's statement in his statement at the trial, assuring that José Villarejo, the policeman's son, was present at one of the meetings in which the commission was discussed. "He went in to plug in a cable because I'm clumsy

According to the Internal Affairs Unit, José Villarejo Gil was in charge of placing the cameras that allowed Urquía to be captured with two prostitutes and a Chilean citizen with a record at a private party in 2006. Villarejo appears in one of the recordings incorporated into the case. saying you have to remove your child's voice that appears by doing the voice test before recording. The commissioner said today at the trial that this audio is also manipulated.

Villarejo's statement has been peppered with other serious accusations, to which neither the judge nor the court have made the slightest case, such as when he has veiled responsibility for the jihadist attack in Barcelona in 2017 to Sanz Roldán, through manipulation of the "magnet of Ripoll" because the then director of the CNI "wanted to give a little scare to Catalonia" and made "a mistake".

The court has agreed to allow Villarejo to testify in the next sessions only in the morning and will intersperse the testimony of other defendants and witnesses in some afternoon sessions, as in the case of today. Villarejo's lawyer defends that sessions like yesterday's, which ended at 3:30 p.m., leave the retired policeman "extremely tired" due to his health problems.