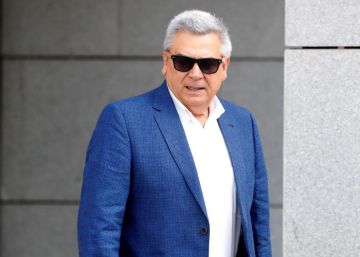 The Internal Affairs Unit (UAI) of the National Police delivered last July to the judge of the National Court Manuel García-Castellón, instructor of the Villarejo case, a report on handwritten annotations intervened at retired curator José Manuel Villarejo that confirm his meetings with BBVA executives until shortly before his arrest. These notes include the celebration of one last meeting with the then head of security of the entity, Julio Corrochano -Which had occupied positions of high operational responsibility in the Police-, in the first days of September 2017, when Villarejo had been splashed for more than two years because of the suspicion of his actions in cases such as that of Little Nicolás and Dr. Elisa Pinto. Two months after that meeting the commissioner was arrested. Since then, he remains imprisoned accused of multiple crimes as the alleged leader of a police plot.

The handwritten documents - whose existence has now been known after the summary secret was lifted - were located on the day of the commissioner's arrest at his home in the Madrid town of Boadilla del Monte. One of them, incorporated into the summary as "indication BE33", includes 22 alleged meetings between the police and BBVA executives between June 2, 2016 and September 5, 2017. Most of them are with a person who Villarejo collects in his notes with the alias of "Kol". Investigators identify him without any doubt with Corrochano, who from his position as head of security of the financial institution maintained a close relationship with Villarejo, as has been noted in the recordings intervened to the latter. Thus, the first of these entries includes: "Kol. Sign contract 2 years. 50[000] monthly Lunch day 9 ". A day later, the commissioner, who was still active but had only a few weeks left to request retirement, notes:" Kol. Cancellation of food on day 9. We agree to see you next[ima] week".

The vast majority of the meetings included in that first document are from Villarejo with the head of security of BBVA. In some the result of them is collected. Thus, on July 13, 2016 he collects: "Nice food. Your pressure[dentesupposedly[dentesupuestamenteFrancisco González, also charged in the case]Very worried about our discretion. It proposes future relationships. "In another note, dated November 23, 2016, he says that they have talked about "Bulgarian" theme, supposedly in reference to a commission for the commissioner to investigate an investment group of this nationality, and a numerical reference: "Subscriber. 25". Or the notation of a day before, when it is revealed that Corrochano is the one who looks for him at times: "He wants to see me to talk about a subject. Proposal for Saturday. It is not possible before"

There are also references from meetings of Villarejo, with other bank executives, specifically about the so-called Operation Chamartín, an urban macro project in the north of Madrid that has suffered numerous delays and in which BBVA participates. One of them is Antonio Béjar, who was most responsible for this project and was fired by the bank after his imputation in the Villarejo case. On July 11, 2017, the retired commissioner notes that he has a meeting with Béjar the next day and the place of that supposed meeting: "Paseo de la Castellana, 216. Floor 15. 10 hours", address of one of the Europe Towers. A day later write down the name of Béjar with three comments: "Posing help in Ope[ración] Chamar[tín]. Very predisposed to work on it. I warn Kol [Corrochano] for commenting. "That same day he makes two other new notes. The first one about someone he identifies as" Ulloa "who supposedly offers" the legal issue of Operation Chamartín. He answered right away. See us September. "Immediately afterwards, he points out a reminder." Kol turns 63 on the 15th. Lunch tomorrow Wednesday. "

The Police also located among the documents intervened to Villarejo in his house a notebook with notes that the investigators relate to some of the allegedly illegal works that the commissioner carried out for BBVA. Thus, a note from October 9, 2013 appears, which reflects the need to "make a note for Kol [Corrochano]"on" Pin ", code name with which it refers to Luis Pineda, president of Ausbanc that the bank allegedly sent to investigate to later be able to denounce him." List of successful cases of Ausbanc with the causes and see judges, "he notes, after pointing out the existence of a rumor about Judge Elpidio Silva, then an instructor of a case against which he was president of Cajamadrid, Miguel Blesa.In another entry appears the mobile phone number of Pineda and on March 10, 2014 a reference to a "power point" on the Pin Project with reference to the bank's chief of security and the word "liquidation".

Finally, the investigators collect in the police report annotations found on page 61 of the same notebook allegedly made by Villarejo in the first half of 2014, although without a specific date. They are figures, references to "invoices", the name Kol next to the percentage "5%", among others. The agents emphasize that "the amounts reflected come to coincide with the payment of 2,577,661.79 euros made on March 6, 2014 as a 'success bonus'. The agents link it with the invoice that one of the commissioner's companies, Cenyt, issued to the bank for the preparation of reports that allegedly served to present the anonymous complaint that led to Pineda's detention in April 2016. According to the reports incorporated into the summary, Villarejo developed this research between 2012 and 2015.