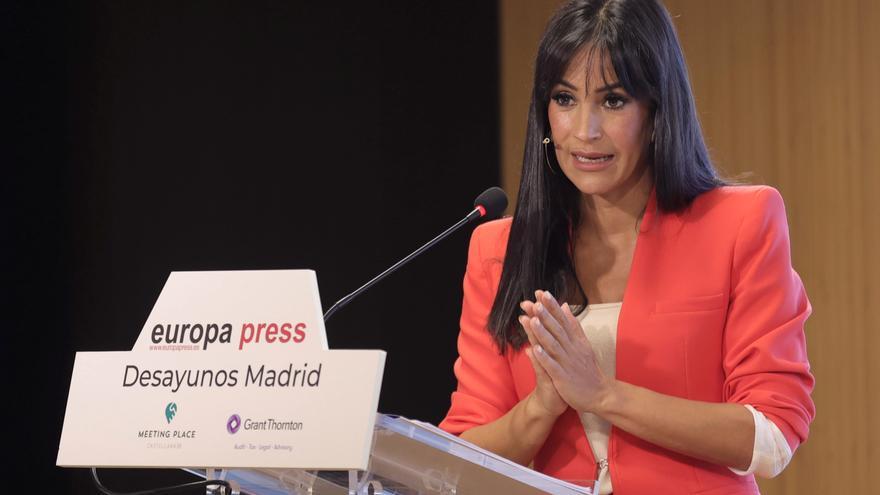 The deputy mayor of Madrid, Begoña Villacís, defended this Monday the role that Ciudadanos is playing in Spanish politics, stating that she is convinced that “a liberal and focused project” like that of her party “is more necessary than ever.” Above all to deactivate pacts between the PSOE and the PP with “the populists of the extreme left or the extreme right”, who represent “outdated” policies. Villacís has referred to “communism” whose 100 years celebrated by some of the United Podemos ministers, and to those parties “that want to break Spain.” But also others, like Vox, “who go hand in hand in Europe signing manifestos with Orbán, Salvini or Le Pen”. In an informative breakfast organized by Europa Press, Villacís, however, has advanced that they will call Vox to negotiate municipal budgets, like the rest of the groups, but has warned that “we are not going to compromise setbacks in LGTBI policies”, whose advances “are armored.”

The deputy mayor of Madrid, who has defined herself as a “very stubborn” leader, has played down her friction with Mayor Martínez-Almeida and has assured that the coalition government “works”, denying having raised a motion of censure to break the agreement and evict the PP from power. As he has revealed, the councilmen “burst out laughing” when they read the article in which it is said that they are preparing a motion of censure because “it is silly and false.” He has also insisted that he called the mayor after Murcia’s motion to assure him that “in Madrid it was not going to happen.” “I do not want to trip the PP or they to us,” he said, ensuring that while in the central government there are discrepancies and they are aired, in the City Council “there are no strange news” about the negotiation of budgets. Of course, he has recognized that they do not always coincide in everything: “We are different parties, with different programs but the difference is that we are mature people and we are capable of reaching agreements. We are professionals and good people”, although “nobody is perfect and we can fail a few times, “has settled.

During the event, Villacís boasted that “Madrid is a free city”, endorsing the slogan of the president of Madrid, Isabel Díaz Ayuso, of the PP. “Cities should be spaces of freedom and Madrid is an example,” he added, because “here we don’t care exactly what language you speak and what your origin is, but what matters is what you do.” “Madrid is free, we don’t stop anyone’s dreams” and it’s free, Villacís insisted “because you can undertake and you can go hand in hand with whoever you want and kiss with whoever you want.” In that sense, the vice mayor recalled that Madrid is the capital that has a flag of Spain in Colón “because we are the proud capital of Spain”, and will have another, the rainbow that represents the LGTBI collective, in the Plaza de Pedro Zerolo.

But, as has abounded, “that freedom is also being made visible from abroad, we are an international subject. Madrid has returned to many international networks and channels. There is a lot of interest in investing in Madrid, they know that here we offer freedom, certainty and legal security” , has assured.

The leader of Ciudadanos has opined that after all these months of pandemic she believes that “we have finally returned to normality”, anticipating that the COVID terraces will remain although seeking the “balance” so as not to damage the rest of the neighbors.

Villacís has not wanted to reveal her future and if she will be a municipal candidate again or this time she will choose the Community of Madrid. “I will be where it is most useful to the liberal project. There are two years left, we cannot rush,” he said. Before he has questioned that everything he said at that breakfast would later become “news”, because he had not given “cool headlines”, nor had he “launched insults or thick words.”

For her part, Inés Arrimadas, who presented her at the beginning of breakfast, defined her as “a good person, agile and courageous” and praised her management at the head of the vice mayor’s office. “Madrid is a better city thanks to the orange seal,” he declared.