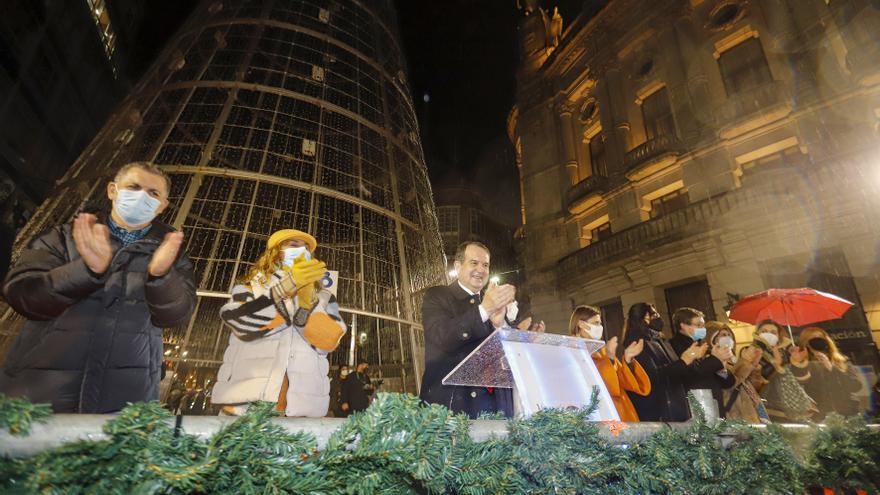 after almost 60 days, Christmas in Vigo comes to an end. The 11 million LED lights They were turned off after 7:45 p.m. today. after extending its life for another week due to the high demand for visits and the request of the hoteliers. The "sadness" of the moment was contrasted with the hope placed on the lighting of the next holidays, where "12 million" light bulbs will be placed: "Tomorrow we start with the Christmas lights for next November, we are going to hit it," he said. the mayor of the city, Abel Knight, before half a thousand people sitting in chairs and thousands of others who circulated through the adjoining streets to follow the act in Policarpo Sanz with the giant tree at the head.

Around 7:50 p.m. this Sunday and after playing two classics such as 'The Last of the Mohicans' and 'Happy Christmas' -by John Lennon-, Abel Caballero pressed the button to turn off the lights in Vigo after two months being "the city of christmas lights"said the mayor. All this without the accompaniment, this year, of musical groups or different performances due to the current delicate situation regarding the COVID-19.

More than five million visitors have breathed in the Christmas atmosphere on these dates, according to data from the local council itself through an analysis of a mobile operator, with which the largest Galician city has managed to break all records.

"Many people and many children are going to feel sad when we press this button, but tomorrow we start with the Christmas lights next November, we are going to hit it"

With the festive vitola already consecrated, Caballero pointed to this 2022 to continue being the Spanish capital of Christmas with "12 million" light bulbs and more than 350 illuminated streets, according to what he pointed out in a television interview after the act today, in which Matías Prats affirmed that "Even if the lights go out, Vigo is always illuminated".

Matías Prats affirmed that "even if the lights go out, Vigo is always illuminated"

"A lot of people and a lot of children are going to feel sad when we push this button, but tomorrow we start with the headlights. Christmas next November, we are going to hit it"remarked the alderman, who also insisted on his Christmas policy, since "it is economy, but it is more than that, it is closeness and friendship" of a city and the company of tourists, something of which he feels "enormous pride ": "The most exciting thing was meeting everyone who visited us and extending a hand of friendship and seeing the eyes of the people of Vigo".

In this line, the mayor recalled several anecdotes, one of them, from the day before yesterday, when he would have met "a family that came from Los Angeles" who would have told him that in the hotels of the North American city "the hotels know the lights of Vigo". Another one he mentioned highlighted a person who arrived in Jordan and, after knowing at the place that he was from Vigo, they told him: "Vigo, the city of Christmas lights".

"When they get here, they feel like they're at home," concluded Caballero, who He stressed that what the tourists found "exceeded what was expected and was a high expectation."

In addition to extolling Vigo as an "industrial city capable of making cars that circulate all over the planet, ships that sail all the seas and oceans, capable of sustainable and wonderful fishing, with its research processes, and that from the university puts minisatellites in orbit", the mayor once again launched one of his wishes: "We want Cíes to be a World Heritage Site", while citing the article in The New York Times in which the islands of Vigo were included as one of the “52 essential destinations in 2022”.

For the laggards, the Ferris wheel has continued its activity until 10:00 p.m. today.

Did the International Space Station pass over Vigo?

As in November, the passage of the International Space Station (ISS) was the "ace in the sleeve" kept by Caballero to surprise the thousands of people who followed this event of global relevance.

But unlike two months ago, This time it was not like that, since it will not be until Tuesday when the ISS greets from the top of the metropolis.