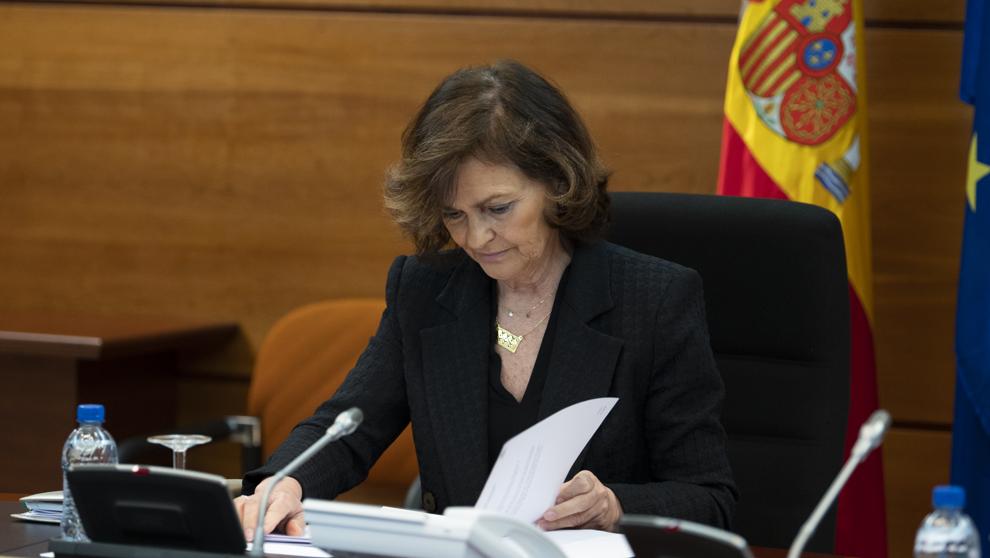 The first vice president of the Government,Carmen Calvohas tested positive for coronavirus, as confirmed by Moncloa sources this Wednesday. The number two of the coalition Executive remains entered in a Madrid hospital since Sunday and Executive sources reported on Monday that he suffered a Respiratory infection that forced him to visit the hospital center.

Calvo immediately underwent several tests, including the coronavirus screening test, but this was negative. According to the attending physician, the data from this analysis were inconclusive and therefore it was decided to repeat. In the test carried out this Tuesday it has given positive.


According to the attending physician, the data from the last analysis were inconclusive and that is why it was decided to repeat the test

In any case, Calvo “evolves favorably”, According to the same sources, and receives the prescribed medical treatment. The vice president remains at the Ruber clinic in Madrid, with the mandatory isolation and quarantine protocol, and she was in charge of announcing her gratitude for the displays of affection through social networks.

“I want to thank the messages that I have received these days and that transmit so much affection to me. I will always be indebted to you and you ”, published this Tuesday on Twitter.

Calvo, 62, remains in the aforementioned Madrid clinic in accordance with the agreements of Muface, the public mutual society to which he belongs.

With the contagion of the vice president, Calvo is the third member of the Pedro Sánchez Government infected by Covid-19 after the cases of the Minister of Equality, Irene Montero, and the Minister of Territorial Policy, Carolina Darias.

Other territorial leaders have also tested positive, as is the case of the President and Vice President of the Generalitat, Quim Torra and Pere Aragonès, in Catalonia; or the president of the Community of Madrid, Isabel Díaz Ayuso, among others.

Contagions have been taking place among the political class, although they are decreasing. The last to be known has been that of the Minister of Treball of the Generalitat, Chakir El Homrani, but the contagion of the former president of the Community of Madrid, Esperanza Aguirre, and her husband, that of the former minister, have also been known in recent hours. of Defense María Dolores de Cospeal, and her husband, or that of Judge Baltasar Garzón.

Among the good news stands out the recovery of the former President of Congress, Ana Pastor, who recently reported that she had overcome the disease.

IS prisoners rise up in prison and some escape in Syria