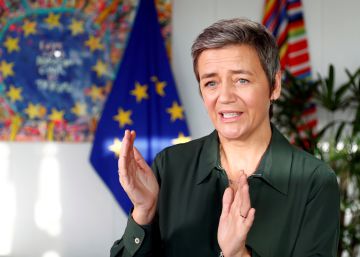 The Vice President of the European Commission and Commissioner for Competition, Margrethe Vestager, will carry out a review of competition rules that will result, among other things, in a much closer monitoring of large digital platforms such as Facebook or Google.

Vestager (Denmark, 51 years old) considers that the current rules have become partly obsolete and are not enough to control the potential abuses of companies that have much more powerful springs in the digital market to distort competition than in other more traditional activities.

“Given the dynamics of the digital market, we must check whether the mechanisms to ensure compliance with the standards are still valid,” Vestager said during an interview with EL PAÍS and six other major European newspapers.

The reform includes greater demands on the dominant operators and verification of the barriers that prevent a user from changing the provider of a free service even when they no longer fully meet their expectations.

The Vice President of the Commission, who in this second term has added to her powers of competence those of the digital market, believes that “the great foundations of the current regulations remain valid.” But it points to a key point in which the reform will be essential to end practices that in traditional markets were severely punished and that in digital are often beyond the control of supervisors.

“We will probably have to reinterpret the responsibility of the dominant operators,” Vestager warns. And the budding reform, according to the curator, is because “the performance of a dominant digital operator can have tremendous effects on the market, since they have a huge amount of data and, in addition, their competitors can depend on it one way or another. ” The vice president is convinced that the dominant operators cannot continue demanding “the same responsibility as 10 or 15 years ago”.

The tightening of surveillance points to the limitation of occupying adjacent markets taking advantage of the dominance of a given activity. An accusation that is repeatedly launched against Google for taking advantage of its absolute dominance in the search market to expand in other businesses, sometimes to the detriment of its own competitors and even customers, according to the chaos opened by the Commission. Google already accumulates three Brussels fines, for a total of 8,250 million euros.

But Brussels will not only monitor the growth of platforms more closely. The Competition Commissioner will also review the model to verify the alternatives available to customers. “The nature of some markets has changed,” says Vestager.

In the traditional sectors “we measure how consumers can react to a small but significant increase, if the liter of milk rises five cents in a store, perhaps the customer plans to go to the store next door.” The curator believes that this model does not work “in some markets where there is no exchange of money, the product seems to be free, so the payment is by another means.”

Vestager wants to introduce a system that checks “what barriers exist in digital markets that prevent a customer from going to another provider when there is a deterioration in the service [gratuito] or when he is asking for too much data. “That test could also determine that some platform abuses its users, taking advantage of the lack of alternatives for such a service.