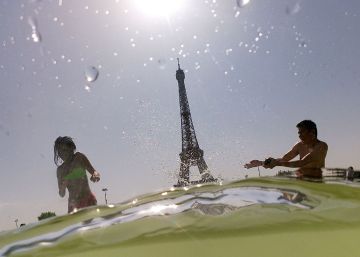 That Europe will soon cease to be news. Seeing Paris, London or Brussels exceeding 40 degrees will become, according to the best available mathematics, a daily phenomenon. And universal, because what Europe is suffering is a consequence of global warming, which in turn is a result of CO concentrationstwo in the atmosphere that the planet has not known in millennia. Reduce CO emissionstwo It is a scientific, political and personal goal, but here we are not even talking about it. Although the emissions were reduced to zero tomorrow, the COtwo which we have already emitted in the past guarantees us that heat waves will continue to increase in frequency for centuries. Read on Matter how the current warming is the most intense in two millennia, and how it is affecting the vast majority of the planet for the first time simultaneously. They are worrisome data, in case we need any more.

Heat waves are a matter of public health. The one that affected Europe in 2003 killed 70,000 citizens, according to some estimates. The three weeks of unusual heat that Holland suffered last year claimed 300 lives. Unlike tornadoes and floods, heat waves do not offer good audiovisual material, but figures show that they kill more people than any of these phenomena so photogenic. Awarding a death to extreme heat is complicated when the victim was already suffering from heart or lung disease. But the mathematics of epidemiology is sophisticated and stubborn. Public health managers would do well to take them seriously, if only to refute them, if they can.

I know that if you are reading this in Spain, you will be enjoying deserved weather relief right now, but the truth is that the week has been annoyed throughout Europe. The heat wave this week, if the reader remembers, has been the second this summer. In the first, a massive injection of air from the Sahara generated the hottest month of June since records have been made. In southern France, near Nîmes, people were crushed by about 46º (45.9, for lovers of decimals) that the region had never known, as far as we know. Not even the Godzilla of Western Europe, Mont Blanc, managed to lower seven degrees at its peak, when it is usual to be below zero at this time.

And in the United States they are not having much better, with 100 million people warned of excessive temperatures. On the east coast they have been breaking 40º, and even surpassing them sometimes. None of this looks good. And the most disadvantaged, as always – although this time the reason is not clear – they will be the poorest countries. They are not only in the geographical location most vulnerable to climate change, but also in the worst financial situation to alleviate it. Politicians have a lot to do in this field. And August will be a good month to discuss it.

THE SCIENCE OF THE WEEK It is a space in which Javier Sampedro analyzes scientific news. Subscribe to the newsletter of Matter and you will receive it every Saturday in your mail, along with a selection of our best news of the week.