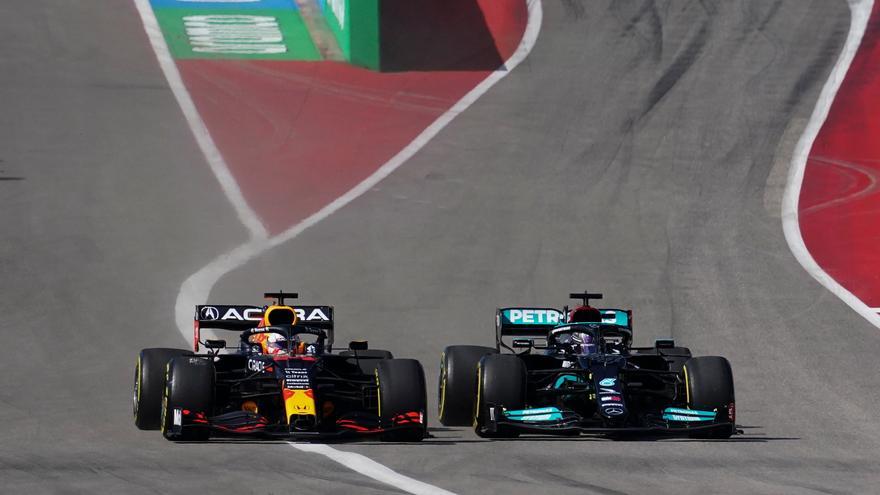 Dutch Max verstappen (Red bull) arrives reinforced leader of the Formula One World Cup most exciting in recent years to Brazil, after relegating the English seven-time world champion to second place in Mexico Lewis hamilton (Mercedes); which he now surpasses by 19 points and with which he will be measured in a Big prize whose qualification will be resolved with a sprint test and in which the winner will opt for an optimal score of 29 units.

Verstappen – 24 years old – added his ninth victory of the year, the nineteenth since driving in F1, at the Autódromo Hermanos Rodríguez in Mexico City; on a great day for Red Bull that was completed with third place from his teammate Sergio perez: first Mexican to get on the podium in a Grand Prix of his country. And with four races to go, the Dutchman leads with 312 and a half points, 19 more than Hamilton – out of 36 – while the Austrian energy drink team is one point behind Mercedes in the Constructors’ World Cup (478 , 5-477.5).

Brazil -where the sprint qualification (the third of the year, after those of Silverstone, in England; and Monza, in Italy) will not only order the grid, but will give three, two and one points to the first three– will close the American tour, a week before the debutant Qatar opens the Middle East tour. This journey will be completed with another premiere in the premier category calendar, that of Saudi Arabia: seven days before the closing of Abu Dhabi, scheduled for December 12.

After turning Red Bull’s dominance around Friday’s dominance on Saturday, Mercedes -who took the front row in Mexico- was surprised at the first change by a brilliant Verstappen, who in the first corner was already running in the lead. In a day to forget Valtteri Bottas, third in the World Cup, with 185 points, 20 more than ‘Checo’, who is fourth. The Finn started from the ‘pole’, he played with the Australian Daniel Ricciardo (Mclaren), finished fifteenth; and his only contribution to his team was the fastest lap (and with it the extra point) that he snatched from the young Dutch star in the last lap.

After his spectacular departure, ‘Mad Max’ drove smoothly to a victory that jeopardizes ‘Sir’ Lewis’s intention to capture an unprecedented eighth crown, a year after equaling German Michael Schumacher’s all-time record of seven titles. Which meant being knighted by Queen Elizabeth.

Interlagos, a track of 4,309 meters and 15 curves -five to the right- which on Sunday will be given, in an anticlockwise direction, 71 laps, to complete a route of 305.9 kilometers; brings good memories to the two Spaniards.

In that circuit, the Asturian Fernando Alonso (Alpine) celebrated the achievement of its two World Cups (2005 and 2006, with Renault); while Madrid’s Carlos Sainz (Ferrari) signed the first of his five podiums in the premier class at the Autodromo Jose Carlos Pace in Sao Paulo.

Sainz, 27 years old, finished sixth in Mexico and is seventh in the World Cup, with 130.5 points, seven and a half less than his Monegasque teammate Charles Leclerc, sExto in the championship and with whom he swapped places twice on Sunday. Ferrari rose to third place in the Constructors’ World Cup, which it ranks with 268.5 points, thirteen and a half more than McLaren.

Alonso, 40, he was ninth in the Red Bull Mexican party and occupies the tenth place in the contest, with 60 points, 14 more than his French colleague Esteban Ocon, eleventh. Alpine, who had not scored for two races, remains fifth, although now tied on points (106) with Alpha Tauri, the French team’s main threat in the World Team Championship.

‘Czech‘, 31, who in Mexico achieved his fifteenth podium in F1, the third in a row, said that “Brazil is another opportunity to improve for the team and for” him. So the brave pilot from Guadalajara will try to maintain a streak that, in addition to favoring his team, could end up ensuring his best place in a World Cup if he manages to snatch third overall from Bottas.

The Brazilian Grand Prix It will reach its forty-eighth edition and, except for the ten times it was run in Jacarepaguá (Rio de Janeiro), it has always had its headquarters in Interlagos: the second highest circuit (about 800 meters above sea level) of the World Cup, although far from that of Mexico (at 2,240).

Look no further than the final race of 2012! 😮🍿#BrazilGP 🇧🇷 # F1 pic.twitter.com/mprrHuIwpS

The French Alain Prost holds the all-time record for victories (six, five of them in Jacarepaguá) in a Grand Prix that the ‘Kaiser’ Schumacher scored four times.

Among assets, no one equals three wins for four-time German world champion Sebastian Vettel (Aston Martin). Hamilton won twice in Brazil (2016 and 2018), where the covid-19 pandemic prevented it from running last year; and where the last to climb to the top of the podium, in 2019, was Verstappen.

In the dry, as of this Friday, when in the morning the first free trainingIt will be rolled with intermediate compound tires: C2 -hard, recognizable by the white stripe-, C3 -medium, yellow stripe- and C4 -soft, red-.

The afternoon session of this Friday will decide, as if in a usual rating it was the grid for Saturday’s sprint test, with a distance of around 100 kilometers. A format that both at Silverstone and Monza was resolved in favor of Verstappen; which will take place hours after the second rehearsal and which will order the starting line-up for Sunday’s race, the nineteenth of the 23 that make up the World Cup.