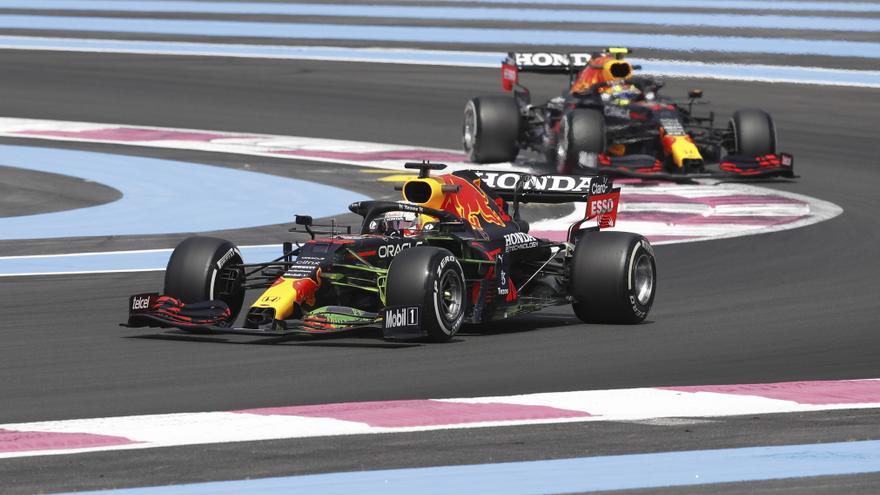 The dutch Max verstappen, first in the Formula 1 World Cup, and his Mexican partner Sergio perez, which with its third place in the contest contributes to Red bull also command the constructors’ championship, they will try to reinforce the leadership of their team in the Styrian Grand Prix, which takes place this weekend on the circuit owned by the Austrian team.

23-year-old Verstappen strengthened his leadership after winning in France. Where he signed his third win of the year and relegated English seven-time world champion to second place Lewis hamilton (Mercedes), which he leads by twelve points (131 to 119). ‘Checo’ Perez, winner three Sundays ago in Azerbaijan, once again completed a great performance with his third place at Paul Ricard, in a race that Fernando Alonso (Alpine) finished eighth and Carlos Sainz (Ferrari) finished eleventh, out of the points.

Things seem to be changing in the premier class. Verstappen, who took the lead by winning in Monaco – where Sainz achieved the best result for Ferrari so far this year – disputes the hegemony of Hamilton, who is chasing an unprecedented eighth title. And Red Bull, which had not won three races in a row since 2013 (the fourth year of the triumphant four-year period led by the German Sebastian vettel), that of Mercedes: tyrannical dominant during the past seven seasons.

With the outstanding contribution of ‘Checo’, who in France confirmed his third place in the championship (with 84 points) after achieving his twelfth podium in the premier class, Red Bull increased its advantage in front of the Constructors’ World Cup, which leads with 215 points, 37 more than silver arrows. And now they will run the next two races at home, since a week after the one in Styria, the one in Austria will be held in the same setting.

The young Dutch star and the master tire manager from Guadalajara will compete in the next two races, the next two weekends, at the Red Bull Ring in Spielberg. Where the triptych that started on Sunday in Gallic lands will be completed; and that, after having done it in 2020 -to configure the calendar of the World Cup of the pandemic-, it will ‘double’ again this year.

This time, as a result of two cancellations, for reasons of sanitary restrictions linked to covid-19: that of Canada, first; and that of Turkey, a substitute for the previous one, later. The Austrian Grand Prix, scheduled again the first weekend of July, kept its dates. And right in front of him was placed the Styrian Grand Prix, named after the region in which the spielberg circuit and whose capital is Graz: the second largest city in the country, after Vienna. Located 50 kilometers from the circuit.

Both races will have the same format and will be run on the Steiermark land circuit, previously known – with different configurations over time – as the Österreichring or the A1 Ring. Now it measures 4,318 meters and has eight curves; and on Sunday it will be given 71 laps, to complete a route of 306 kilometers and a half. A track that, due to the altitude (about 660 meters above sea level), generates less load and aerodynamic resistance; of low lap time and that punishes the brakes a lot.

In the dry, it will be rolled with tires of the intermediate range of compounds -C2 (hard, recognizable by the white stripe), C3 (medium, yellow stripe) and C4 (soft, red) -, in free practice that starts this Friday and will be completed on Saturday. Hours before qualifying, which will order the starting formation for Sunday’s race.

Verstappen won, before the Covid-19 pandemic, the previous Grand Prix of the country (2018 and 2019) and enters Austria with a twelve point advantage over Hamilton. But since the Alpine Republic returned to the calendar, in 2014, the rest of the races have been won by all Mercedes.

Including both from last year: the Finn Valtteri Bottas won the Austrian Grand Prix; and Hamilton of Styria, in which he laid the first stone of what ended up being his seventh title. With which he equaled the historical record of the German Michael Schumacher.

So the fight between ‘Mad Max’ and ‘Sir’ Lewis, Red Bull and Mercedes, promises to keep the excitement these next two races.

‘Checo’, who left happy “but wanting more” from Paul Ricard, is third in the World Cup, with 84 points, eight more than the fourth, the Englishman Lando norris (McLaren) -the only one who has scored points in the seven races held this year-, a partner during the past two seasons of Sainz, who is seventh in the contest.

Increasingly readapted to the premier class, to which he returned after two years absent, Fernando Alonso (Alpine), sixth and eighth in the last two races, is eleventh, with 17 units.

Alonso believes that on the Austrian track there is an opportunity to overtake “at the third and fourth turns”, and of “advancing positions Sunday”, reason why it celebrates that races in the Red Bull Ring are repeated.