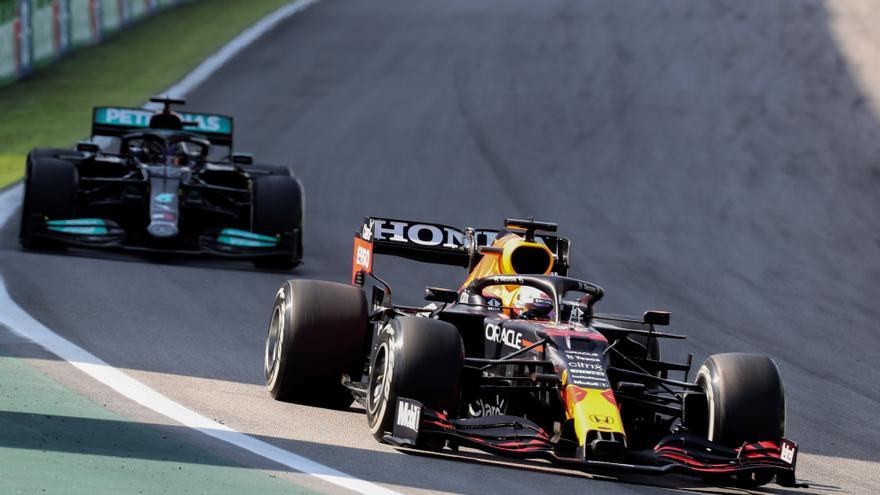 Dutch Max verstappen (Red Bull), leader of the Formula 1 World Cup, and English Lewis hamilton (Mercedes), to second it, to 14 points, they move their fight for the title to Taste, debutant in the calendar and that will host -in the circuit of Losail- the twentieth and third-to-last Grand Prix of the most exciting championship in recent seasons, a year before hosting the World Cup.

Qatar, which was announced on the calendar at the end of September, will close the 'triptych' that started two weeks ago in Mexico City, where Verstappen won - and his Mexican teammate Sergio Pérez was third -, and resumed last Sunday in Sao Paulo (Brazil); where Hamilton overcame two penalties before completing an exhibition culminating in extending his own all-time F1 win record to 101. With which he reduced to 14 points the advantage in front of the Verstappen championship - which leads with 332.5 - with three races remaining.

The emirate of the Persian Gulf opens the journey of the Middle East, which will resume two weekends later with another debut, that of the Jeddah street circuit: home of the penultimate of the 22 races of the contest. Seven days before the closure of Yas Marina, in Abu Dhabi, the capital of the United Arab Emirates.

F1 joins Qatar's commitment to host major international sporting events, including, among others, the 2015 Handball World Cup and the 2019 Athletics World Cup. This year F1 makes its debut, which will not repeat the next one, but which will return the next ten: to the third country on the Arabian Peninsula - after Bahrain and the United Arab Emirates (in Abu Dhabi) - to host premier class races.

In 2022 everything will rotate in Qatar around the World Cup -for those who have already secured the classification, among others, Neymar's Brazil, Luis Enrique's Spain and Messi's Argentina-, so next year there will not be a Grand Prix that from the following year will be stopped and fund of the contest until at least 2032.

Not a few gave Hamilton for dead after the Mexican Grand Prix, after Verstappen's triumph, which was completed with the podium of 'Checo': fourth in the World Championship, with 178 points, 25 less than the Finn Valtteri Bottas (Mercedes) .

Furthermore, when, after being sanctioned in Sao Paul with five seats for changing the combustion chamber, the English star was disqualified from qualifying on Friday, due to irregularities in the rear wing (in the DRS). 'Sir' Lewis showed resilience and climbed to fifth in qualifying via sprint race, which Bottas won ahead of 'Mad max'and of a brilliant Carlos Sainz (Ferrari), sixth on Sunday. The Spaniard from the most awarded team in history occupies the seventh place in the World Cup, with 139.5 points, eight and a half behind his Monegasque teammate Charles Leclerc.

Hamilton, who started tenth, completed one of the best weekends of his entire career advancing nine places to win against a Brazilian crowd that supported him throughout the Grand Prix and thanked him by carrying the flag of the host country during the lap of honor and at the podium ceremony.

In Qatar, it will revert to the normal grading format, preceded by three free practice sessions; the first two, this Friday. In Losail; a circuit located about 20 kilometers north of Doha, the Qatari capital. Built in just over a year, inaugurated in 2004 for the Motorcycle World Championship and the permanent venue for that championship ever since.

"In the simulator it seems fast. And it will be interesting to see how an F1 performs on this circuit, compared to motorcycles," the Spaniard said before arriving in Doha. Fernando Alonso (Alpine), who, after two years absent, returned to the premier class. The Asturian double world champion was ninth in Interlagos - the track where he mathematically celebrated his two titles (2005 and 2006) - and is still tenth in the competition, with 62 points, twelve more than his French colleague Esteban Ocon.

Losail is a 5,380 meter track, with 16 curves (six on the left), the majority of high and medium speed; and with a main straight of more than a kilometer in length. Starting this Friday, when training starts, the tires will be run on the hardest compound range: C1 (hard tire, recognizable by the white stripe), C2 (medium, yellow stripe) and C3 (soft, red) .

The first race in the history of F1 in Qatar will be held on Sunday and is scheduled to 57 laps, to complete 306.6 kilometers. And it will not only be at stake if Verstappen manages to dethrone the spectacular and eccentric Stevenage champion this year, thus avoiding an unprecedented eighth crown for the British.

In Brazil, Ferrari confirmed its third place in the team World Cup, in which it added 287.5 points, 31 more than McLaren; and the contest for fifth place between Alpine and Alpha Tauri continues, with the same points (112). Honor matters, but in these last three races there is still a lot of money at stake.