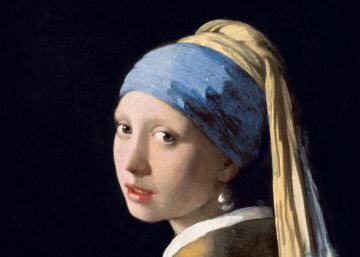 “He would be able to let me cut off my left hand on the condition that I could watch Vermeer of Delft for ten minutes sitting at his easel when he was painting.” Salvador Dalí was a staunch supporter of the Dutch Golden Age galactic painter. In it he found the escape from the abstraction practiced by his contemporaries and in which he only saw decoration. Unlike them, his own style, he said, was a reunion with the great sources of painting, to remake it: “You have to understand again,” he explained in one of his first interviews, while painting. The spectrum of Delft Vermeer usable as table, which is kept in the Dalí Museum in Saint Petersburg. He reviewed the baroque painter several times, until in 1955 he created the Paranoid-critical study of Vermeer’s ‘Lacemaker’, which exhibits the Guggenheim in New York. He even shot a feature film with Robert Descharnes on this painting by the artist that Dalí had as the greatest, the only one capable of surpassing Velázquez in his personal classification of the masters of art.

The greatest among the greats had no money to pay for bread. And, after his death, his widow had to settle accounts with the baker with two paintings. Vermeer lived in misery and his slow and detailed work did not help him achieve more benefits either. He died at the age of 43 and only 35 paintings are attributed to him. They were enough to take Dutch genre painting to the highest level, where everyday life heralds a painting that will take over two centuries later. In Dutch painting, the exceptional is the everyday, without shrillness or heroes. There is more subtlety than drama, more light than gesture. More winks than metaphors. Vermeer refused to pluck his characters from the prose of life. Malraux said he was a painter who offered the world “painting itself as a fundamental value.” For many theorists, what interests Vermeer “is not the world of men, but that of painting,” he said. the thinker Tzvetan Todorov.

However, it is important to stop in that world of men to see what is the world of women. “The husband must go out to work / the wife, in the kitchen, will not leave the home”, in a verse by Jacob Cats, famous moralist poet of a time with a full-fledged patriarchy. The tasks, in that 17th century Holland, are distributed according to sex. And there they are, locked up, domesticated and owners of their own room the size of a prison, like The girl in the pearl necklace (1662-66). The daily thing is, for them, the narrowness, alleviated by a vanishing point, the windows, which are more torture than hope. Of all those women secluded in the silence of their tasks, in the domains of their invisibility, The girl of the pearl (1665-1667) –which is exhibited in the Royal Mauritshuis Gallery, in The Hague, which allows you to visit the painting virtually and in high definition during its temporary closure – it seems to be the exception to all the inmates: it is simply an idealized face, a perfect painting, the best example of its expertise in capturing clients. She is the muse of your catalog. Vermeer achieves such a perfect representation that he does not seem to paint people, but pictures. Not women, but beings who occupy rooms.

Rafael Cabrera, fan, a critical and recognized voice of bullfighting | Blog The bull, by the horns