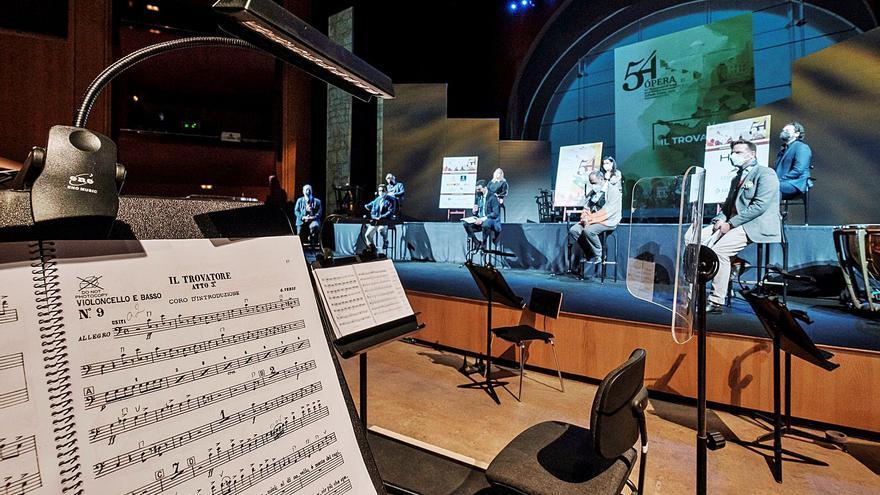 The season organized by Amigos Canarios de la Ópera, with five titles scheduled until June, is adapted to the “special circumstances”, in the words of Óscar Muñoz, president of ACO, that the sanitary protocols in terms of capacity require. Hence, four of the 2021 programs are held in the symphonic hall of the Alfredo Kraus Auditorium, and one in the Pérez Galdós Theater.

Yesterday, the directors of the opera predicted “a great success” to this Verdi title, of which three performances are offered on February 23, 25 and 27, at 8:00 p.m. "An excellent cast", in the opinion of Óscar Muñoz, defends this show. "It is said that it is a difficult opera to put on because it needs a number of aces in the repertoire," said the artistic director of ACO, Ulises Jaén. In this case, there are "five great singers", such as the Mexican tenor Arturo Chacón-Ruiz, who debuts with ACO and debuts in the role of Manrico; the Madrid soprano Saioa Hernández as Leonora, in her first appearance at the Opera Season; the Alicante tenor Manuel Fuentes, debutant on the island and the character of Ferrando; Canarian mezzo Nancy Fabiola Herrera, who debuts in the role of Azucena; and the Italian baritone Massimo Cavalletti, as Count of Luna.

The cast is completed by the Canaries Nora Carrasco (Inés), Gabriel Álvarez (Ruiz), Manuel García (A messenger) and César Morales (A vecchio Zingaro), all in their role for the first time.

This is the seventh time ACO has shown Il Trovatore in its history. The last one was in 2009. The president of ACO stressed that this piece "is an important milestone" that shows the operatic tradition of the capital of Gran Canaria. This opera in four acts with music by Verdi and libretto in Italian by Salvatore Cammarano, based on the play El trovador (1836), by Antonio García Gutiérrez, premiered in Rome in 1853, and in 1861 it reached the old Cairasco Theater.

This new ACO production has had to be adapted to an Alfredo Kraus Auditorium that was not conceived for opera. With the acoustics in favor, a moat has been enabled raising the first rows of the stalls, to place an orchestra that reduces the number of musicians in the wind section, maintaining the string and the percussion. All this without affecting the score, as explained yesterday by the Valencian director Jordi Bernàcer, who makes his debut with ACO at the head of the Philharmonic Orchestra. Along with the OFGC, will be the Choir, with Olga Santana.

The scenography, directed by Carlo Antonio de Lucía, has been resolved with projections and rapid scene changes, saving the technical impossibility of changing the sets.

An opera this one with a dramatic accent, of "a lot of sadness", the same one that for months "has been a constant in our life", in the words of Arturo Chacón-Cruz. The tenor, as well as the rest of the singers, highlighted the effort of ACO, and considered that being on stage is a luxury, for them and the public, despite the distance protocols and masks.

"We are privileged, and it is time to move forward," insisted Saioa Hernández, happy to return to this role after a first time in which she was not satisfied. For her part, Nancy Herrera, who faces "a very dreamed role" in conditions "that are not easy", insisted that culture, despite the covid, must move forward.