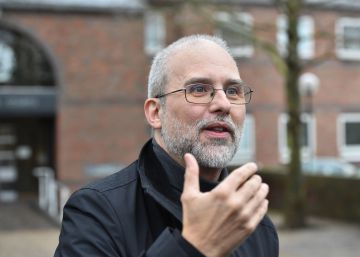 What appeared on paper as a labor dispute, to be resolved in a court in the east of England, has ended up deriving in a sentence of unpredictable consequences that recognizes veganism as “a philosophical belief” and deserving of legal protection. The accusation of the ruling announced on Friday was the complaint filed by Jordi Casamitjana against his dismissal from the animal organization League Against Cruel Sports, which he considers discriminatory and attributes to his radical opposition to any kind of animal exploitation. This Catalan zoologist, 55 years old and a British national, explains in this interview with EL PAÍS the reasons for a campaign that had the essential support of the crowdfunding

Question. The judge has determined that veganism deserves the protection of the Equality law passed in 2010 against discrimination based on race, pregnancy or sex, among others. Did you think your cause would go so far?

Reply. When I was fired I did not know the legal situation of veganism, but my lawyers explained to me that mine could be the first case of this nature and capable of operating a change in the law. After accumulating 1,400 pages of evidence, I realized that I could win, although I was still surprised that the judge failed the same day of his reading, something unusual that demonstrates the weight of the evidence

P. Vegan ethics sees its legal protection recognized in the workplace. What do you think it will mean for the thousands of employees who share their philosophy of life?

R. From now on, they will feel more confident when expressing their philosophy without fear of reprisals. Many take it with discretion out of fear, maybe not to be fired, but to be treated differently. Now they know that, in case of conflict over discrimination, they can go to court. I think there will be other countries that will be inspired by my case and that, as a result, there will be much more veganism in the world and that that will benefit the millions of animals that are exploited, the environment and public health.

P. Taken to the extreme, the consequences of the sentence seem unapproachable for entrepreneurs. For example, if the employee refuses to work in a space with leather sofas or dispatch the meat products to the supermarket customer.

R. Entrepreneurs have to realize the need to change some rules, such as including vegan options in food that uniforms do not force an employee to wear leather shoes. Actually that phenomenon when it comes to protecting a philosophy already exists in the United Kingdom. For example, if you are a Muslim who works in a store and do not want to handle meat, do not halal, the law protects them to give you another task. Respecting veganism will not be a huge expense and the exaggerations that have been made respond to the fear of the unknown. We are not facing a catastrophic revolution, only in recognition of those who try to change their lives to minimize damage to animals. I think it is a value in a democratic society.

P. A group of philosophers consulted by EL PAÍS has criticized that any lifestyle seeks to legitimize itself in law. What would you answer?

R. That argument has philosophical value, but not legal in the United Kingdom. The English (common law) system establishes that the law is perfected through the resolution of cases that set a precedent. The Law of Equality does not limit what is or is not a philosophy because it is expected that the successive cases will clarify it. In the past it has failed in favor of environmentalism or pacifism, and against homophobia or neo-Nazism. That is, everything that is negative and pernicious does not pass the test

P. What induced you to embrace veganism and what does it mean in everyday life?

R. Part of my testimony before the judge was a detailed description of the decisions I make from the moment I get up until I go to bed, what toothpaste or clothes I wear, that there is nothing in my house with an animal product and that I don’t enter … I will never have A romantic relationship with someone not vegan. That philosophy affects my whole life. I hugged her 18 years ago. I have always worked in the world of animal protection and I ended up realizing that animals are much more similar to humans than you think, but that they were treated as objects without emotions or motivations. I created a conflict, I stopped eating meat and even wrote a book[[The Demon´s Trial, under the pseudonym J.C. Costa]that distills that guilty process.