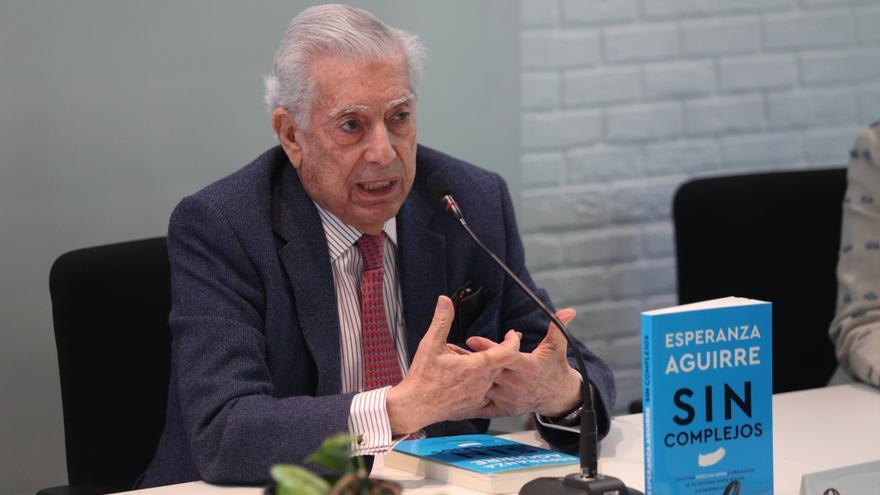 Managua, Sep 10 (EFE) .- The Nobel Prize in Literature Mario Vargas Llosa (Peru) will participate this Monday in Madrid in the literary festival "Centroamérica Cuenta" along with its organizer, the Nicaraguan Sergio Ramírez, winner of the Cervantes 2017 prize, reported this Friday the host press team.

Vargas Llosa and Ramírez Mercado will talk about "Literature and Latin America", in a dialogue that will be moderated by Colombians Carlos Granés and Pilar Reyes, according to the program sent to Efe by the Nicaraguan writer's press team.

The "Centroamérica Cuenta" festival will be held in Madrid from September 13 to 17, by the Spanish Agency for International Development Cooperation (AECID) and Casa América, and will feature, in addition to Vargas Llosa and Ramírez Mercado, several emerging authors, the source indicated.

According to the organizers, the objective of "Centroamérica Cuenta" in Madrid "is to present a sample of what is experienced year after year in this festival, which seeks the exchange between literature from Latin America and Spain, from the Central American region."

The literary program in Madrid includes an agenda of four thematic talks between Latin American writers and writers on topics such as the ways to forge identity or errant writing, as well as the relationship between literature and politics, and a sample of the new voices of the current literature, according to the program.

Parallel to the programming of talks, on Wednesday, September 15, a special edition of the radio program Efecto Doppler, directed by Esther Ferrero, will be held live from Casa de América, entitled Cuadernos Hispanoamericanos, a literary dialogue in a Spanish without borders.

The program will conclude on Friday, September 17 with the screening of the film La Llorona, by Guatemalan director Jayro Bustamante, at the Iberia Room of Casa de América in Madrid.

Among the participants in the talks are emerging and established authors, both from Spain and Latin America.

"Centroamérica Cuenta", born in 2013, is an initiative of the Luisa Mercado Foundation with the support of the Swiss Agency for Development and Cooperation (Cosude), the European Union, the Spanish Cultural Action and the University of Guadalajara Foundation.

This literary festival, born from the ideology of Ramírez Mercado and the late writer Ulises Juárez Polanco, has convened to date more than 600 writers, journalists and editors from Germany, Latin America, Central America, Spain, the United States, France, Italy and the Netherlands.

It will be the first activity in which Ramírez Mercado (Masatepe, Nicaragua, 1942) participates, after the Public Ministry of his country accused him of "carrying out acts that promote and incite hatred and violence."

The writer and novelist, who was vice president during the first Sandinista government (1979-1990), pointed out to the Nicaraguan president, Daniel Ortega, of having accused him "through his own Prosecutor's Office," and that he is "a writer committed to democracy. and for freedom "and that" the only weapons I have are words and silence will never be imposed on me. "

The Public Ministry requested an arrest and search warrant against the winner of the Alfaguara de Novela prize in 1998 and the Iberoamericano de Letras prize "José Donoso" in 2011, who is outside of Nicaragua and had already announced that he would not return to the country to avoid Government retaliation after being summoned by the Prosecutor's Office.