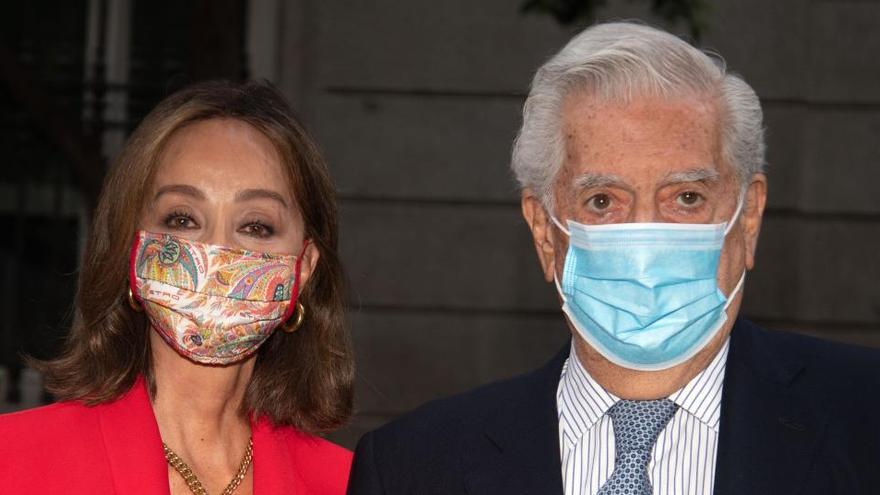 “They have given me the Nobel Prize although I do not know if it is a joke”. Thus he communicated Mario Vargas Llosa to his daughter Morgana the news of the award of the award ten years ago, and today the writer has received a tribute in which he has vindicated the role of literature in forming critical citizens.

Friends, colleagues and cultural personalities have participated in the tribute organized this Thursday at the Cervantes Institute on the occasion of the tenth anniversary of the awarding of the Nobel Prize for Literature to the Hispanic-Peruvian writer, who has dismissed the event by thanking his partner, Isabel Preysler, having renewed in him his vocation as a writer, the best thing that, he said, has happened to him in his life.

In a conversation with your son Alvaro Vargas Llosa, the Nobel Prize in Literature, born in Arequipa (Peru), in 1936, has recalled his literary career and his thoughts on literature, which “Helps to form wayward citizens, insubordinate, who are not resigned to living as it is lived because they aspire to something superior “.

“Have you prevented the Nobel Prize from burying you alive? Álvaro Vargas Llosa asked his father, who considered that one of the difficulties that this award has is show that after that award you are alive, “because it tends to turn writers into statues as if their life experience had already ended.” And, yes, the writer has said, “I think I have proved that I am alive, I have published many books since then.

For the Nobel, the role of the writer, “despite the writers themselves, is critical” and “it is enough that freedom is restricted so that literature immediately appears as a combat weapon“something that may not be appreciated in free and democratic societies.

But Vargas Llosa has warned of the danger posed by the great development of the audiovisual industries separating the public from the critical function that literature has. “If there is a reason for democracy, it is to create critical citizens who do not allow themselves to be manipulated and I do not know if audiovisual entertainment has been marginalizing the traditional critical attitude of literature,” he considered.

In the tribute, the director from the Cervantes Institute, Luis Garcia Montero, has described as a luxury for this institution to be able to celebrate the tenth anniversary of the Nobel Prize in this act, which began with the reading of some verses by the American poet Louise Glüke, what has obtained this Thursday the award of the Swedish Academy, and has highlighted the civic dimension and political commitment of Vargas Llosa.

The general director of the Book, Maria Galvez, has recalled the first words of Vargas Llosa’s acceptance speech for the Nobel Prize: “I learned to read at the age of five and it is the most important thing that has happened to me in my life.”

“The most influential intellectual in the Hispanic world”

The director of the Vargas Llosa Chair, Raul Tola, has addressed the audience that on both sides of the Atlantic has followed the event that has had to be held with a reduced capacity due to the pandemic of the coronavirus.

For this reason, people like Fernando Savater, who recalled that the award of the Nobel to Vargas Llosa produced such joy for many people as if it had been given to them: “A great writer and at the same time close.”

The same joy has remembered that the historian felt Rachel Chang Rodriguez, while the director of the Royal Academy, Santiago Muñoz Machado, has remembered the day that Vargas Llosa entered this institution and has described him as an “exemplary academic.”

The Brazilian author Nélida Piñón has indicated that when he met him in 1979 he knew he was “doomed to extraordinary glory”, while editor Gerald Martin He has described him as the “most influential public intellectual in the Hispanic world”, and the writer Javier Cercas has indicated that “any scribbler can win the Nobel Prize but only Vargas Llosa has been able to write what he has written”: “It is easier to win the Nobel Prize than to be Vargas Llosa.”

Gonzalo and Morgana, the author’s children, have also congratulated their father by video and recalled how he communicated the news to them on October 7, 2010. “They have given me the Nobel Prize although I don’t know if it is a joke,” Morgana recalled what he said when he called Lima and how, as “good Latin Americans”, 80 relatives traveled to share the happiness from his father in Stockholm.

An act that the Nobel Prize wanted to end with a message for his partner, Isabel preysler, who was in the front row of the audience: “To thank Isabel for her company, her presence, those wonderful years that she has made me spend by her side and that have renewed in me a lot that vocation that I think is the best thing that has made me past in life. ”