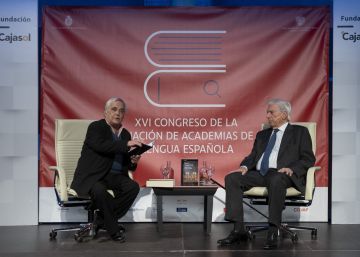 While working on his novel The green House, Mario Vargas Llosa discovered "something". "A new possibility", a technique "capable of entering reality through many levels". He tells Wolfgang Luchting, his German translator, by letter on January 26, 1966. The Peruvian writer had been lit by the light bulb with which he knew how to shape one of his most important novels, Conversation in the Cathedral, which turns 50 years of publication. The experiment, "for perfecting still much", consisted of interviewing conversations of different characters, carried out at various times and, at the same time, mixing them with their thoughts. A literary bobbin lace that required a reader effort. Everything to tell Peru about the dictatorship of Manuel Odriá (1948-1956).

His illusions, thoughts, difficulties are in the appendix that has been added to an edition, published by Alfaguara, which celebrates half a century of the book that included in its beginning one of the most famous phrases in Spanish literature: "In what moment had Peru screwed up? " The Nobel Prize talked about Thursday with the EL PAÍS journalist Juan Cruz in a crowded courtyard of the Cajasol Foundation, in Seville, on the occasion of the XVI Congress of the Association of Academies of the Spanish Language.

"In that Peru, the corruption of the dictatorship reaches distant areas of politics," Vargas Llosa began. Questioned by Cruz, he explained that "the main conversation" in the book led to "others who would come and go." When he got that clear, "everything was easier."

Among the notes it is noted, as is known, that Vargas Llosa called that book embryo "the bodyguard novel" and that his initial idea was to be around 300 pages, but in the end he could passion and reached almost 800. Perhaps because, as the critic Abelardo Oquendo writes, he wants "to fight without quarter to write a quantitatively Balzacian and qualitatively Flaubertian work." It almost happens to the characters he is creating, Zavalita, Ambrosio, because in his letters he crosses the methodical process of creation ("I finally spend six, seven hours before the machine") and his intimate thoughts ("alone, helpless and without love I will write terribly these two months, "he says in the absence of his wife, Patricia).

A Oquendo realizes his sacrifices: "I have had to suppress theaters and cinemas and lock myself in stone and mud." In May 1968, so much effort was worth it, as he writes to his German translator: "I am certain that I have achieved something really important. My exaltation has no limits." Only a few months later he confesses that he has written too much, that the book suffers from "elephantiasis" and that he will have to leave the four volumes in two. "He began a task of eliminating, above all, adjectives and adverbs," he said in the conversation with Cruz. In an introductory note to this edition, the author confesses that this is the most difficult book to write. A thought he picked up this Thursday: "It's the novel that made me a writer."

For his readers and scholars, correspondence with his friends, great Latin American writers such as Donoso, García Márquez, Fuentes, who proclaims, after reading the book, that it is "the only political novel in Latin America", while Álvaro will be striking Mutis transmits his "glare." They are "letters of joy to friends," Vargas Llosa recalled.

In addition, there is room for its editor, Carlos Barral, the man who had driven him from Barcelona with The city and the Dogs and that after receiving the tests he says that "it is one of the great novels of the century". It is the Spain of Franco's dictatorship, so the pages have to go through the torture of a censor. The special edition reproduces the censorship report of December 4, 1969, which warns that it is a work that talks about politics and that there are "extremely raw" expressions, but ends up opting to be inhibited.

And about the editions that the book had, it is detailed that until the fourth the title was Conversation in the Cathedral, with the lowercase ele. Then it was capitalized to name the infected food house in which the smell of feet mixed with that of onion, populated by debased characters, who let themselves go in a society that had been hopelessly screwed.