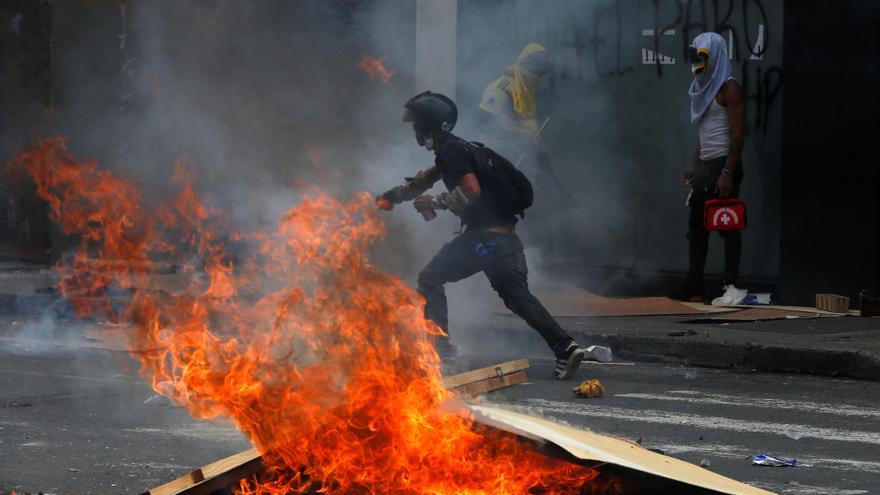 Bogotá, Apr 28 (EFE) .- A group of individuals, including several hooded men, attacked the facilities of the RCN television channel and its international channel NTN24 on Wednesday in Bogotá, during the protests against the Colombian government's tax reform.

"From Noticias RCN and NTN24 we reject the attack suffered against the facilities of the RCN Channel, promoted and carried out by a group of violent men that occurred today at three in the afternoon and which left material damage and put the integrity of journalists and workers at risk. that we are part of this means of communication ", denounced the directors of both channels.

In a statement signed by Claudia Gurisatti and José Manuel Acevedo, directors of NTN24 and Noticias RCN, respectively, they denounced "this direct attack against freedom of expression, which is a fundamental pillar of any solid democracy."

"We value and respect the right to peaceful protest to express citizen nonconformity, but we clearly express that vandalism and the summons to it are forms of repudiable violence and not country-building," the statement added.

The Bogota Government Secretariat said on social media that the attack made necessary the intervention of agents of the Mobile Anti-Riot Squad (Esmad), of the Police to prevent "a group of individuals from forcibly entering the RCN channel and destroying their facilities".

The same entity added: "This is not a protest. Bogotá rejects vandalism and violence."

In videos that circulate on social networks, it is seen that several hooded men tried to enter the facilities of the media located on Avenida Las Américas in Bogotá.

It is not the first time that protesters have attacked this medium. On other occasions they have taken it against RCN Radio facilities, which is part of the same communication conglomerate.

Hours before the incident, the mayor of Bogotá, Claudia López, asked citizens to speed up their return to their homes to avoid crowds in transport, which has been affected by the demonstrations against the tax reform.

The president explained that in the first hours of the Transmilenio marches, Bogotá's transportation system had "multiple disruptions and blockades and it is possible that something similar could happen in the afternoon."

Thousands of people took to the main streets of the country today to protest against the tax reform presented to Congress by the Government of President Iván Duque, in a day that the vast majority passed peacefully.

However, one person died in Cali (southwest) during the protests, according to the mayor of that city Jorge Iván Ospina.