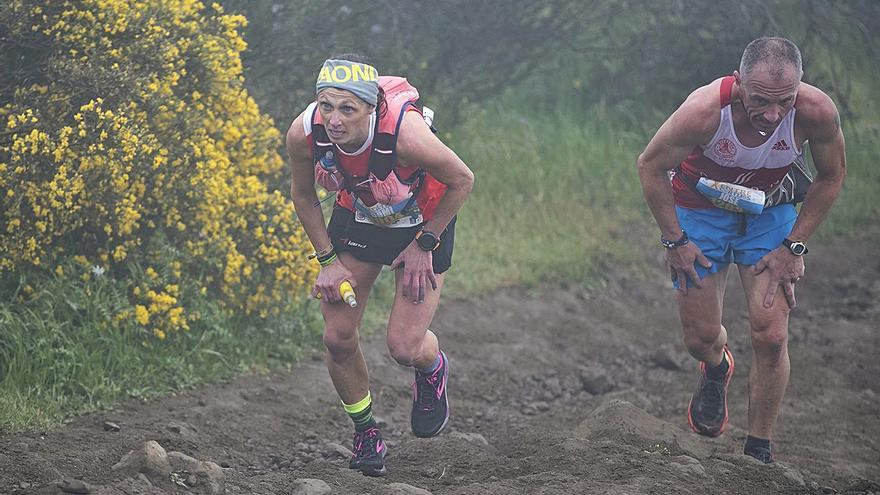 The tenth edition of Entre Cortijos, held yesterday in the Montaña Alta area of ​​the Gran Canaria municipality of Santa María de Guía, brought together many of the best trail runners in the Canary Islands. The favorites lineup was one of the most lustrous of the 10-year history of this event, and proof of this is given by the spectacular records that were recorded at the finish line.

The queen test of the event, with a route of 26 kilometers, had a clear dominator in the men’s category: Alejandro Mayor. The Galdense, who returned to the competition with great enthusiasm and who imposed the fastest pace since the start of the test, achieved an undeniable triumph, setting a time of two hours 11 minutes and 13 seconds. The Gran Canaria, who is considered one of the best athletes in the Archipelago, demonstrated that condition yesterday. He gave a master lesson in Entre Cortijos.

Another of the illustrious participants, Esteban García, conquered a very worthy second place at the finish line with a time of 2.13: 02, while the podium would be completed by the young Santi Castellano, who a few weeks ago claimed the victory in the LPA Trail. His record, 2.15: 41.

Regarding the 26-kilometer women’s race, this one also had an undisputed leader. Dominique Van Mechgelen fulfilled the predictions that marked her as the favorite for victory. With a time of two hours, 38 minutes and 57 seconds, she lowered the best women’s mark on the track, which she herself had since 2017.

From the start of the race he was intractable. The Belgian returns to the top of the box in Entre Cortijos and shows that she is made for the big dates. The second place, a position that she defended from the beginning of the race, corresponded to the young Yasmina Castro, while the veteran Graciela Acosta, the 2020 champion, obtained the bronze in this tenth edition.

For its part, in the shortest test -15 kilometers-, the fastest of the day flew over the route proposed by the Entre Cortijos. The Irishman Eoin Flynn made his debut in this race with a quite authoritarian victory. His time of 56 minutes and 55 seconds gave him the triumph of the finish line. He crossed the finish line ahead of Javier Fernández and Gabriel Efraín Pérez, who scored a time of 57:27 and 59:11, respectively, which gave them silver and bronze.

For her part, Estela Guerra reigned in the exciting 15-kilometer women’s event. His record of one hour, eight minutes and 29 seconds gave him a comfortable victory. The second position fell to María José Guillén, with a time of 1.13: 12, while Loli Muñoz, with a record of 1.15: 44 was third.

The City Council of Santa María de Guía managed to carry out the race on this round anniversary, saving the difficulties of this year, and did so reaping total success at the level of participation, with about 800 runners displaced to the Montaña Alta area. All this, within the framework of a test that is included in the official calendar of the Royal Spanish Athletics Federation.

As usual, the green tone of the terrain through which the Entre Cortijos runs captivated all those who participated in what is considered the most rural race in the Canary Islands. Passing through the cheese factories, the transhumance areas and the typical midlands farmhouses and hamlets make this test one of the most beloved on the regional scene. In addition, the nucleus of Montaña Alta, in Guía, where the traditional flower cheeses and potato bread and sweets of the municipality are offered, turns this event into something more than a purely sports day.

La Entre Cortijos said goodbye to its tenth edition, having complied with the health protocol that allowed the appointment to be a reality, despite the hard times of the pandemic that has been suffering for more than a year.

The race was promoted and pushed by the Santa María de Guía City Council, whose mayor Pedro Rodríguez was present yesterday in Montaña Alta, and the municipality’s Sports Promotion Society, headed by Alfredo Gonçalves, who was also able to complete successfully the 15-kilometer test.

The support of the Insular Sports Institute and the collaboration of companies such as La Bodega de Guía, Provital, Emicela, Aguacana or Inerza made it possible for the event, under the organization of the Arista company, to fulfill the wishes of the almost 800 trail runners who they met yesterday.