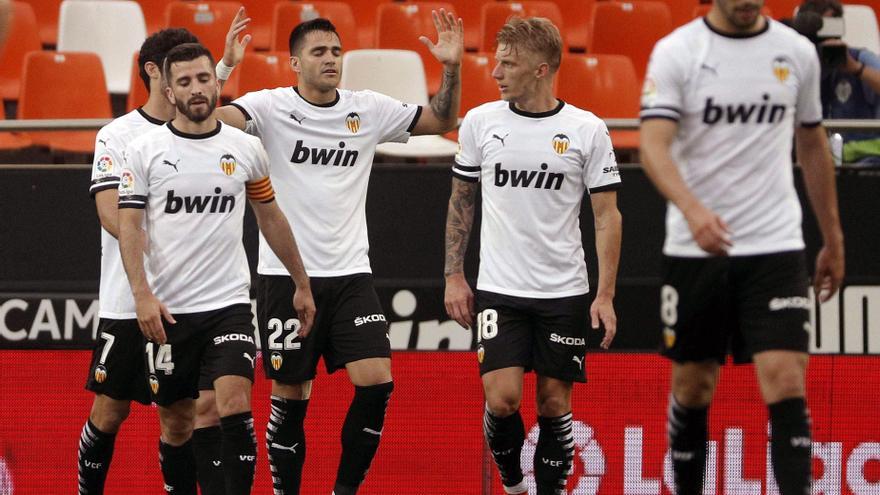 Two goals from Maxi Gomez, in the last play of the first part and in the first of the second, and another of Thierry almost at the end they gave the Valencia a key win (3-0) in his fight for the permanence in view of the Valladolid.

The pucelano team, which received an excessive win, was superior until the break and in the second half dominated a local team that defended well.

The first half was controlled by Valladolid, whose offensive bet created many problems for Valencia, but the match reached its halfway point with a local advantage when Uruguayan Maxi Gómez scored the 1-0 after Gayá’s pass in the 45th minute, against a rival who did not follow his dominance of clarity in front of the door.

The 2-0, also scored by Maxi after a good pass from Carlos Soler, arrived in the first play of the second half, which led to a second half similar to the first, with Valladolid turned on the goal of Valencia, which tried to extend its advantage to the counterattack against a rival that maintained the dynamics of the first period, although with the difference of the disadvantage on the scoreboard, until almost at the end it was 3-0, which keeps the Castilian team immersed in the fight for permanence.

The Voro González’s debut on the Valencia bench It entailed the presence of three centrals (Gabriel Paulista, Hugo Guillamón and Diakhaby) as the main novelty against an opponent who entered the game much better than the locals and who had a double chance of scoring in two good shots from Jota and Olaza that he neutralized Cillessen.

Although the match leveled off after minute ten, Valladolid offered better sensations than Valencia, especially in depth when approaching the goal of the local team, since the only options for the Valencian players came to the counterattack.

Sergio González’s team did not take long to regain control of the match, with Cillessen’s constant arrival at the goal and without giving the Valencian team a chance. Corneres and a lot of presence on the edge of the local area clearly marked that Valladolid was the owner of the match.

When the match was about to reach half-time goalless, one of Valencia’s few approaches ended with the 1-0 scoreline scored by Maxi Gómez, after a cross from Gayà’s left, which led to the duel to his Equator in favor of team that less soccer had proposed.

The Valladolid went to rest with excessive punishment, which increased in the first play of the second half, when a deep pass from Carlos Soler led Maxi to make it 2-0 on the scoreboard.

As the score was, Valladolid had to add to the good football of the first period a greater intensity in its attack and it achieved it above all from the entries of Marco André and Hervías, which gave way to a phase of great mastery of the Castilian team, with numerous balls pumped over the Cillessen area that the Valencia defense forcefully neutralized.

The Valencia found himself with several options to extend the advantage to the counterattack against an opponent launched to attack, but wasted them despite almost always approaching Masip’s goal in superiority, until in one of them, almost at the end, a Cheryshev cross ended in goal after a good header from Thierry Correia, that closed the meeting.

Incidents: match of day 35 of the League played without an audience in Mestalla. A minute’s silence was observed in memory of the local team’s exporter Ángel Abelardo, who died this week.

A monumental Faríñez saves Venezuela against a very offensive Colombia

Spain stumbles on Belarus in its Eurobasket premiere