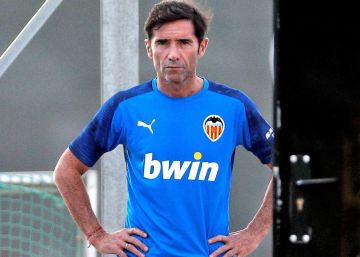 With only three league days played (four points achieved) and at the gates of playing on Saturday against Barcelona at the Camp Nou, the owner of Valencia, Peter Lim, has decided to dismiss Marcellin, the technician of the first Mestalla team. Albert Celades has been chosen by the owner to redirect a successful project that, from the hand of the Asturian coach, comes from conquering the Copa del Rey and qualifying two seasons in a row to contest the Champions League after a dark period of as many campaigns away from Europe, repeating a twelfth place in the league.

Peter Lim urged President Anil Murthy last weekend to a meeting in Singapore. Murthy, who was on vacation in Italy with his family taking advantage of the league stop, traveled to the Asian city, where he learned the owner's decision to fire Marcelino immediately and announce the hiring of Albert Celades. In Mallorca, while Mateu Alemany, the CEO, met on Tuesday by an employee that the president had been called to an extraordinary meeting to which he had not been summoned.

In a brief and cold statement, Valencia made public in the early afternoon of Wednesday the march of Marcelino, who advanced the Valencian radio station CVRàdio: “Valencia CF announced on Wednesday to Marcelino García Toral his dismissal as coach of the first team. The club wants to thank you for your work and dedication during your time in our entity and wish you the greatest success for the future. ” Just half an hour after the club's announcement, Albert Celades arrived in Valencia to lead the afternoon training session.

The policy of summer signings has opened a gap in a successful project since the property decided to incorporate Mateu Alemany as general manager in charge of the sports plot. Mateu proposed Marcelino's name to Peter Lim in May 2017 and put it before Quique Setién, José Ramón Alesanco, sports director at the time. Mateu and Marcelino, the double M, mixed well and the club won in stability and regained prestige. The state headquarters were in Singapore and the government delegation in Valencia. And both for the first time, after two black courses, they went to one.

This summer, Valencia, again, broke in two. Peter Lim, who had let the double M operate and had allowed the technician to surround himself with a group of similar collaborators close to 30 people, decided to assume more responsibility in the transfer parcel and tried to impose players who managed or represented his advisor and friend Jorge Mendes. Rafael Leao, Nicolás Otamendi, Radamel Falcao and Nabil Fekir were rejected by the sports management, which defended other options such as Maxi Gómez, Denis Suárez and Rafinha, managed by Eugenio Botas, Marcelino's agent. Of these three players only the Uruguayan striker arrived. The fracture was so evident that the highest shareholder of the entity made the decision to dismiss Mateu Alemany as general director on July 29 before such opposition. Marcelino's threat of resigning before the presentation of the team in Mestalla and the dispute of the first day of the league, the support of the squad, and popular pressure made him reconsider Lim, who accepted Murthy's recommendation to back down . The reading that left that first crisis was evident: Mateu and Marcelino followed but they were going to lose influence in the market decisions after facing the property.

The instability reached a critical peak when Peter Lim agreed with Miguel Ángel Gil Marín, general director of Atlético, the sale of Rodrigo Moreno for 60 million euros in mid-August in an operation machined by Jorge Mendes that needed the departure of André Silva from Milan, from the sale of Correa from Atlético to the rossonero complex and from Rodrigo's transfer to the rojiblanco club. Mendes failed in that Malabar business and Rodrigo, who had said goodbye to his teammates, had emptied his box office in the sports city and returned the official car, finally stayed in Valencia as the protagonist of a sad sainete.

Since the Rodrigo affair exploded, the umbilical cord that linked Singapore and Valencia was cut and in the club they were left in the dark. Peter Lim rejected the transfer of Rafinha and Marcelino, with his overwhelming personality, began to be belligerent in most of his press conferences firing darts against the owner. The technician's claim and response attitude caused rejection in Singapore, which he planned to dismiss at the slightest stumble. Valencia drew against Real Sociedad, lost with Celta and beat Mallorca before the break but the owner, without explanation, has decided to hit the coach three days after playing against Barcelona and less than a week of competing in the Champions League against Chelsea at Stamford Bridge.

Espanyol call for the match against Athletic

Real Sociedad: Illarramendi leads the protest of the Real for the Cup schedule: “You have looked”

“The VAR is a great lie” – The Province