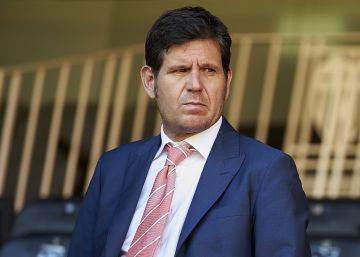 Peter Lim Keep collecting bills. The owner of Valencia has fired Mateu Alemany as general director of the club after a meeting held Thursday in Singapore where the conditions of the contractual termination of the Balearic executive have been closed. Mateu Alemany, sentenced since the end of July after the first major crisis that shook the institution, follows in the footsteps of coach Marcelino García Toral, dismissed by the owner on September 11. With the departure of the Mallorcan, the Singaporean businessman ends up dismembering his first solid project in Valencia since joining the club to Meriton, its parent company, in 2014. Without the double M, Mateu and Marcelino, the owner dispenses with the personalities had returned to the institution stability, prestige, a Cup title and the revaluation of a depreciated workforce until the arrival of both in 2017. It is the institutional drift of Meriton.

"I am sure that only crabs walk backwards or to the side," said Marcellin on August 23. That phrase, another punch in the critical argument of the technician since he met the pact to sell Rodrigo in the final stretch of the market, angered Peter Lim. The coach, however, was right. Rushing changes in his frame and executing his generals with the course underway, Meriton goes back in time to its most dire stage. The one of the Neville brothers, Ayestarán, Alesanko or García Pitarch … a dramatic and aimless time where the club, subjected to the capricious swings of an owner who did not know what he had bought, lost reputation and positioning in Europe.

No need, with a recent title after 11 years of famine, playing Champions League, with the template quoted and loyal around Marcelino and Mateu, Meriton dynamite a champion project and returns to the starting box.

With Celades on the bench, submitted week after week to an examination against the clock to show that despite his short service sheet he is qualified for the position, Lim is now behind a sports director to restore stability to a club that returns to be scrambled The property has probed Robert Fernández, former player of Valencia, Barcelona and former sports director of the Culé team. The transition phase waiting to sign the Mateu substitute is led by President Anil Murthy with Jorge López, former player of the club and one of the members of the technical secretariat.

Mateu Alemany was sentenced since in July, allied with Marcelino, he collided head-on with the property for the sports planning of the season. Marcelino's threat to leave before the team's presentation if the general manager left, restrained Lim's impulse to liquidate the Balearic, but the coach was marked. Emboldened and strengthened by the recent Copa title, Mateu and Marcelino sensed that they could impose their criteria on the entry and exit of players and raised a rebel pulse that they could never win. Peter Lim decided to intervene the club signing device and that wave was ahead of the double M.

In an interview given a few dates ago to the official media of the club, President Anil Murthy finally decided to give explanations for Marcelino's departure. “There was a lack of trust in him and his project was different from that of the club and Peter Lim. There was a loss of confidence with his role in the club model that the property has in the long term. In summer there was a distancing between the decisions of the club and the decisive role, of a lot of influence, that Marcelino demanded in the signing policy, also with a public pressure that made things even more difficult, ”explained the leader in an interview custom made.

"The club had supported him in everything, everything, including his decisions about the market. Even in the worst sporting moment, in January, it was Peter Lim who finally decided to continue supporting him. This summer, however, his challenge and his discrepancy were unacceptable. constant individual towards that club model, which was not going to stop, ”Murthy said.

Regarding Mateu Alemany, he acknowledged that the Balearic "is not clear about his fit in this project, has made us see that the situation is different for him and that he values ​​leaving." If the director general has not left before, it is because the agreement for his termination has cost more to reach than Marcelino's due to different economic clauses that made the dismissal more expensive.