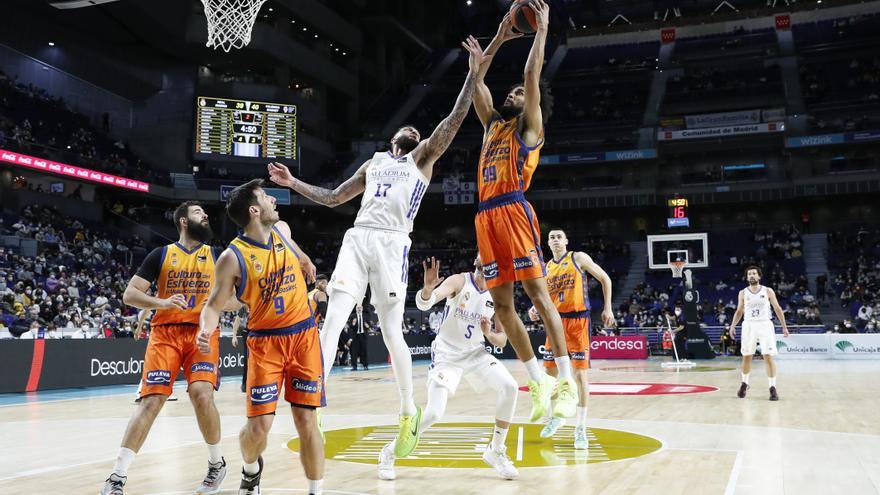 The thrust of the Cuban Jasiel Rivero in the most complicated moments and the intelligence of Xabi Lopez-Arostegui uneven at the request of the Valencia Basketball an even duel on the track of a Real Madrid who had a hard time maintaining the intensity but who is still the leader of the Endesa League.

Valencia Basket started with its two 'fives' on the court ready to open up the local defense with their open shots and although they succeeded, five triples from Real Madrid, two Guerschon Yabusele and another three from Thomas Heurtel, with the invaluable help of the blocks by Walter Tavares gave Real Madrid control of the match (23-13, m.6). The five of five from 6'75 also gave him the leadership in the battle of sensations.

The gall of Jaime Pradilla and an adjustment in the defense of the direct block allowed Valencia to get up from the canvas and sign with their second unit a partial 0-12 to turn everything around.

The match began with an agile exchange of baskets with Frenchman Vicent Poirier and Rudy Fernández supporting the hosts on both baskets and with Sergio Llull and Klemen Prepelic taking advantage of each other's defensive weaknesses. The visitors' best three-point percentage gave them a win at halftime, although a basket by Yabusele on the buzzer minimized the damage to the locals (48-51, m.20).

Valencia returned to the track better who opened a gap taking advantage of the poor shooting percentage of the locals and the energy of Cuban Jasiel Rivero. With a run of 2-12, a technique to Heurtel and with his team focused on the referees, Pablo Laso had to stop the match (50-63, m.24).

The harangue had an effect on Madrid, which increased the defensive lines but above all the intensity. Led by Nigel Williams-Goss and Llull's cheek from the three-point line, Pablo Laso's team reduced their disadvantage until finishing the fourth with the same one he had at the beginning (71-74, m.30).

A triple by Rudy Fernández opened the last quarter and tied the game. The good work of the locals in the offensive rebound allowed them to punish the locals but Rivero's return gave Valencia the energy they needed and Prepelic's points to lead the match to a tight end which they entered with a slight advantage thanks to a triple by Xabi López-Arostegui (83-90, m.37).

A three-pointer by Rudy gave hope to Madrid that managed to tie the game but Rivero reappeared for a basket with an additional free throw that López-Arostegui scored for him when he climbed on him. A triple by Llull tightened the clash but the Basque forward was fouled and although he missed the first shot he also missed the second to leave Madrid with no options.

Incidents: match corresponding to matchday 21 of the regular phase of the Endesa League played at the WiZink Center in Madrid before 5,398 spectators.