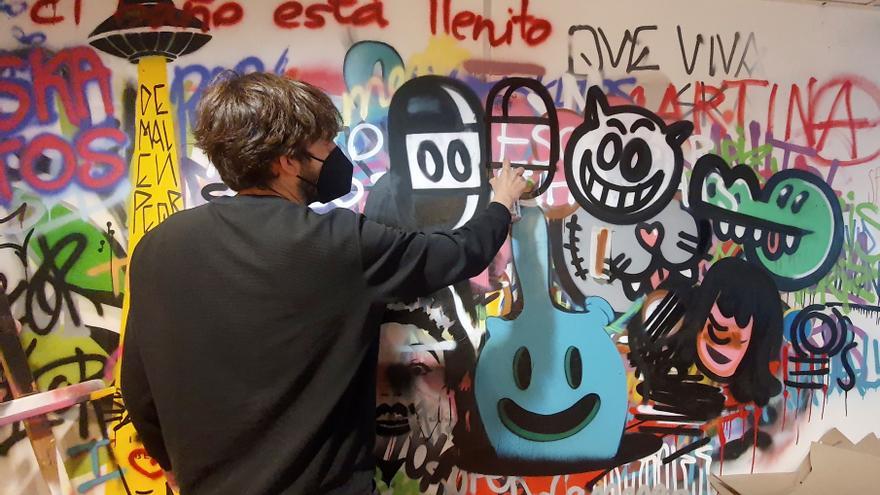 Valencia, Jul 2 (EFE) .- The explosion of urban art that Valencia has experienced during the pandemic has placed it in the first world level in this type of artistic expression, to the point that tourist routes are multiplying to contemplate murals that now they permeate the streets of the old town with messages of hope and reflection.

Valencia has been placed on the map “as a benchmark for urban expression that does not exist in any other city in the country,” says Mar Aguado, a tour guide in the city who highlights that people who enjoy urban art “have their eye on Valencia “They come here because they have been to Berlin, they like” street art “and they know that” here it can be just as good. ”

Berlin, New York or Medellín are cities in which street art fills entire streets dedicated to murals. “Street art” was born in New York in the 70s, a decade later it arrived in the German capital, just before the fall of the Berlin Wall, to illuminate its streets with striking colors or political or transforming messages. In fact, Comuna 13 of Medellín managed to leave behind a dark world of guerrillas and drug trafficking thanks to “street art”.

Now the old town of Valencia is, along with those other cities in the world, a benchmark for this ephemeral art.

El Carmen, a neighborhood with narrow streets in the heart of Valencia, where many tourists observe the medieval gates of the Torres de Serranos and Quart, is one of the places where most of these artists decide to capture works painted with feeling that give color to one of the most charismatic neighborhoods in the city.

Abandoned walls, museum facades or public institutions have been collecting for months characters with masks, sad faces or hybrid figures with messages of support for the fight against the coronavirus.

Valencia has increased its “street art” tours considerably. Both national and international tourists come to the city to learn about its history and walk through the murals of this famous neighborhood. Rafael Vilaplana, a businessman specializing in tourist tours, assures EFE that in 2018 they did this tour once a week, instead they now do it four times.

Some of these murals represent iconic characters of these days, such as Fernando Simón, director of the Emergency Center of the Ministry of Health, or the singer Miguel Bosé, indisputable protagonists at certain times of this pandemic. “Many tourists have already learned, they come looking for this, it is like a wink in urban art, they want to see more,” says Mar Aguado.

David de Limón and La Nena Wapa are Valencians, they have been painting for years, showing their works in the streets or holding exhibitions and workshops, with their own studio in El Carmen.

Vinz is also from Valencia, he began his career in this art in different European capitals and different cities in the USA. In 2015 he decided to return to his city to reflect his pieces in various cultural exhibitions, working mainly with institutions. His works are fables with naked people and animal heads where each character represents a series of values.

The three, along with many others, are some of the protagonists who have winked at the pandemic with painting and responsible for taking Valencia to the top in this type of art.

On Na Jordana Street, known for locating a fault with a special section and leading to the Valencian Institute of Modern Art (IVAM), there is one of the murals by David de Limón and La Nena Wapa, a work whose main character is a woman painted in black and white tones, with a blue mask and with a red heart in her hand. On both sides of it, David places two figures of his best-known character, a young man in black and white with his face covered up like a “ninja”, but this time also covered with a blue mask and his gaze dull.

“This mural arises from a main idea of ​​La Nena Wapa, who designs that character and wants to capture it in the city, it is a somewhat sad character,” he explains to Efe Limón, who adds that what the mural inspires him is ” the sadness that we are going through, the attempt to convey resignation with a touch of hope with the hearts that appear ”.

La Nena Wapa assures that the work has had “a lot of repercussion” and that above all they try to reflect a message with a tone of sadness and self-care: “if you take care of yourself, you take care of others,” he adds.

The main figure of the mural was born as a result of the pandemic under a line with the hastag “#safestyle”, a woman with a look that penetrates when you look at her, with eyes that reflect a discourse of sadness and holding her own in her hands. heart.

Vinz captured in the Valencian Museum of Illustration and Modernity (MuVIM) a large graphic composition of 700 square meters in which 64 balconies appear, one for each of the days on which we went out to applaud.

“I, in almost 42 years that I have, had never experienced something similar, the fact that for 64 days we went out to applaud, thematically at 8 in the afternoon from Monday to Sunday, every day at the same time to give moral and raising the spirits of all the people who were risking their lives to keep us safe, it was something that had to be reflected, ”he says.

The three artists are aware that the covid-19 affected them, especially during the first months of the pandemic, they put art aside to focus on their families or on more domestic things, yes, always observing how the pandemic evolved to reflect it in their works.

La Nena Wapa knows that she will cover her famous mural with another that represents that we have put the pandemic aside. His partner David de Limón will continue to capture his little protagonist on the streets of Valencia.

Vinz thinks that after the pandemic we will be more animals and less human and assures that “in the end what will remain is the survival of the animal and not the person who remains silent, who obeys, who bows his head, but the person who claims and it looks for its own way without paying much attention to politicians or laws ”.

De Limón, La Nena and Vinz, are some of the artists who have echoed this “different year”, and who have made the streets of Valencia a cultural reference worldwide, while their artists will continue to observe history to tell chronicles through painting.