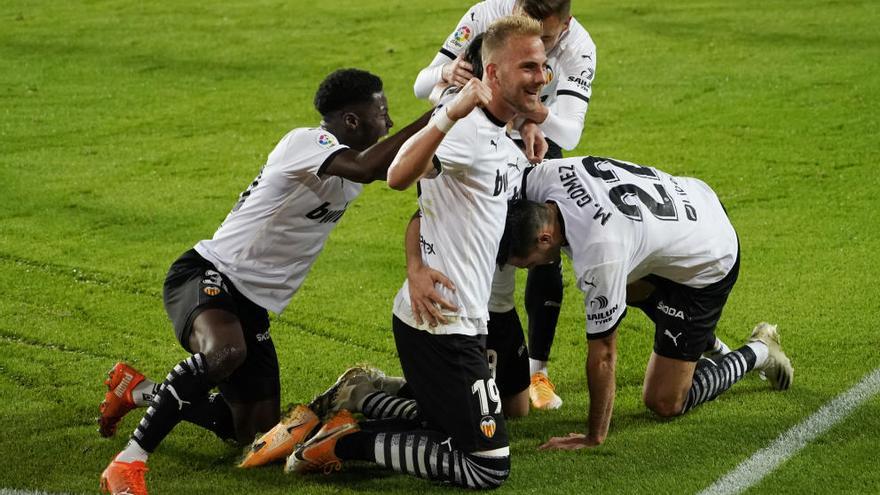 The Valencia, who scored three of his penalty goals on shots from Carlos Soler, gave no option to Real Madrid in a visiting control meeting in the first half hour, but that the local team came back on the basis of maximum penalties and a lot of intensity, especially in the second half.

The game measured a Valencia in low hours against Real Madrid at a good time, so it was difficult to predict a local triumph, but impossible to predict the way in which it would occur.

It was an exciting meeting, marked by concrete actions in the areas and in which Soler came to throw up to four maximum penalties, the first of them failed, although the action was repeated, and in which VAR had to be used thoroughly in decisive plays for the development of the clash.

At the beginning, Real Madrid controlled the game and, although it did not create excessive danger, it always stayed close to Jaume Doménech’s goal against an opponent who he was barely able to come out on the backlash.

A powerful shot of Benzema at the halfway point of the first period he advanced the team that was managing the match and although after the goal Valencia came out a little more than his plot, Javi Gracia’s team was not able to level the game.

However, a hand from Lucas Vázquez was punished with a penalty. Carlos Soler launched. Courtois refused. Soler sent the rejection to the post and the rejection of the stick was sent to goal by Musah.

The VAR reviewed the action and Gil Manzano decided that the launch be repeated. This time, Soler hit the same stick for which Courtois had stopped the first pitch.

The first revised play of the clash gave way to the second. Varane sent the ball over his own door and Courtois cleared it after the ball has passed the goal line. New recourse to VAR and second goal for Valencia.

This is how rest was reached in a crash in which the visiting team had dominated in the first half in the game, but in which Valencia did it on the scoreboard.

The second half started frantic with a providential departure from Jaume Doménech first and Kang In Lee hit the post next.

Shortly after, a new penalty. This time from Marcelo about Maxi Gómez, which the VAR did not review. Soler changed the stick to Courtois and, although he dived to the right side, he could not reach the ball.

From that moment, Zinedine Zidane’s team increased its territorial domain, but shortly after there was a new penalty and also favorable to Valencia, this time by clear hands of Sergio Ramos that the VAR also reviewed.

Carlos Soler repeated the 3-1 launch and beat Courtois which was also thrown well, although it did not arrive.

With 4-1 on the scoreboard, control of the game was absolutely for Real Madrid, but Valencia was more consistent that in the first half and barely gave options to his rival, who lacked aim.

They played more as Valencia wanted, despite the fact that the game was developing very close to the goal defended by Jaume Doménech and the match reached its conclusion with a resounding victory for the local team with which it alleviates its crisis and slows down the dynamics of the Madrid team.

Incidents: match played at the Mestalla behind closed doors.