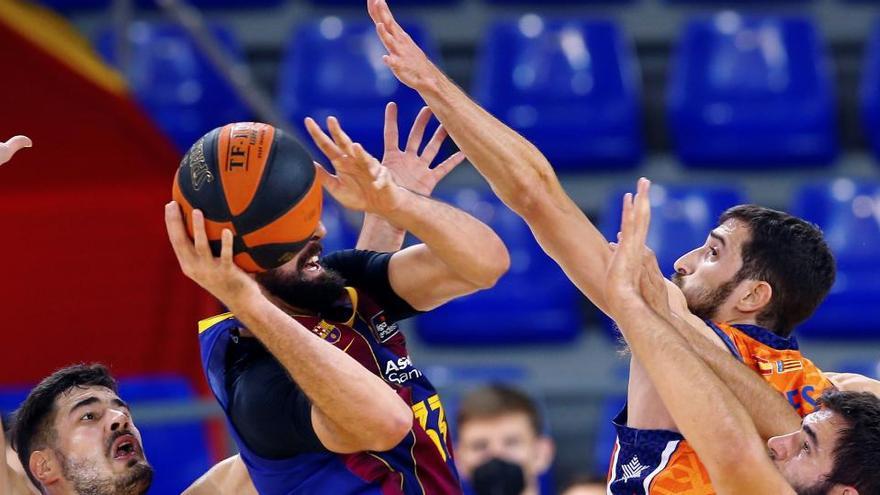 A bright Valencia Basket took a breath in the Endesa League and undressed the Barça Barça(90-100) at the Palau Blaugrana, where the Catalans missed their usual solidity to stop Derrick Williams (25 points) and Bojan Dubljevic (24 points and a PIR of 33).

The blaugrana team conceded 100 points, something unheard of for one of the best defenders on the continent, and added the third defeat in the Endesa League, the second in a row after the last European setback against Asvel Villeurbanne.

The visitors, on the other hand, achieved a prestigious triumph -the fifth in eleven games in the Endesa League- and they remain in the fight to play the Copa del Rey.

In the first half it was seen a karat basketball, with a frenetic pace, a torrent of points (51-51), and a quarter for each team.

The first was for him Valencia Basket (32-22). Jaume Ponsarnau’s team, led by Williams -13 points after the first ten minutes- and Dubljevic, with 9 and 4 assists, unleashed one of the best defenses in Europe.

Jasikevicius’s time-out after two minutes into the game, after a 3-10 run by the visitors, did not stop the bleeding. The Valencia He overcame Calathes points (10) with triples, 7 of 11 in the first quarter, and easy baskets from the paint to seal a comfortable ten-point lead (32-22).

In the second quarter, Barça woke up and he did it from the defense. He shone above all his teammates Adama Hanga, tightening the nuts back and scoring eight points to equalize the match (38-38, min.15).

Valencia missed Williams and Dubljevic, their offensive guides, but thanks to Pradilla and Van Rossom they prevented the Barça, with Heurtel decisive designing perfect blocks and continuation with Oriola, he left with an advantage at halftime (51-51).

No one speculated with the score at the restart. The pace continued to be frenetic, although the success of both teams decreased. Valencia started better, with Dubljevic dominating in the area although with less success from the perimeter, which allowed them to enjoy advantages of no more than seven points (59-66, min.27).

At Barça, Oriola, given the lack of success of the exteriors, assumed responsibility in the Barça attack, and punished Valencia by loading the offensive rebound.

The entrance of Hanga, defensive thermometer, boosted locals again who finished the last three minutes of the third period with a partial of 11-4 with which they equaled the match (70-70).

The last quarter started as the first for Valencia. Those of Ponsarnau tied Barça with a basketball coral and an imperial Tobey in the area.

In four minutes, the visitors chained a 2-15 run (72-85, min.34) that forced ‘Saras’ to request two timeouts. In the first he gave directions to his players, in the second he opted for silence, standing away from his players in one of the images of the match.

Barça, with more heart than play and Mirotic, who finished with 20 points, reacted but not enough to overcome the match, which ended with a technique to Jasikevicius for protesting and Valencia reaching 100 points at the Palau.

Incidents: early match of the seventeenth day of the Endesa League played without an audience at the Palau Blaugrana.