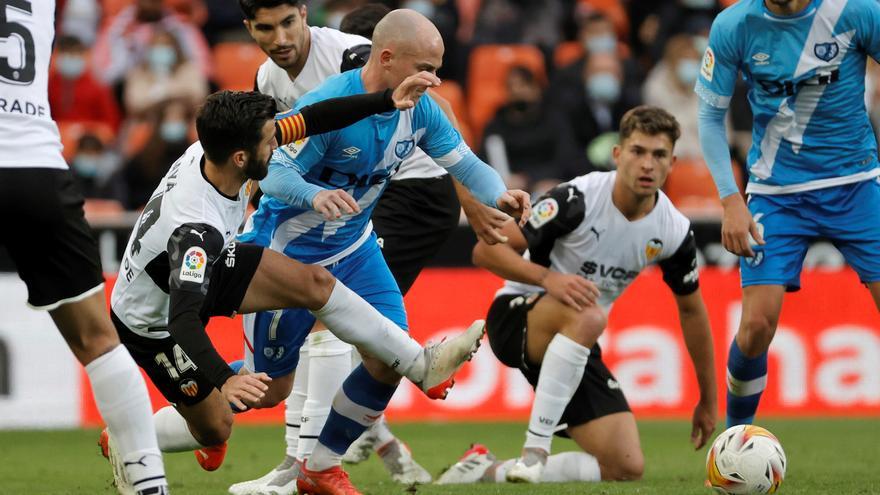 Valencia and Lightning they tied1-1) in Mestalla in a meeting in which the local team put the opportunities of goal, especially in the second half, and the Madrid team football.

From the first moment, Rayo tried to have the ball and elaborate their football against an orderly Valencia that tried to surprise the counterattack. Despite this control of the game, Andoni Iraola’s men did not reach Cillessen’s goal clearly, while Valencia opened the scoring on the first occasion available. A deep ball from Gayà on Hugo Duro, ended with a demolition of Saveljich. It was initially signaled offside, but the VAR review changed the decision to a penalty. Carlos Soler beat Dimitievski.

What did not change was the dynamics of the game, which maintained greater possession of the ball by the Madrid team against a Valencia trying to look for its options in long balls to Guedes and Hugo Duro. However, almost never the local attacks had clear options to expand the account, so the clash reached its halfway point with Soler’s lone goal.

At the beginning of the second period, Valencia showed more incisive and I think danger against the Rayista goal in their first approaches, although the visiting team maintained control of the ball, although without the authority of the first half. This circumstance did not prevent that in one of the local arrivals and after a good stop by Cillessen, Isi established on the scoreboard a level that reflected the dynamics of the match better than the 1-0.

After his goal, the visiting team sought the second goal and had at his mercy Valencia for a few minutes because of his own confidence and because of the insecurity of the locals. However, from then on the options were lavished against both goals, especially against Rayo, but the Bordalás team did not know how to take advantage of them.

Valencia showed in general, more heart than game and the Ray made good plays, but almost never clearly reached the goal of his rival.

Incidents: Match of the 15th day of the League championship played at Mestalla before 30,030 spectators. In the run-up to the match, a tribute was paid to the inclusive Valencia footballers, made up of players with functional diversity, who were photographed with the local team.