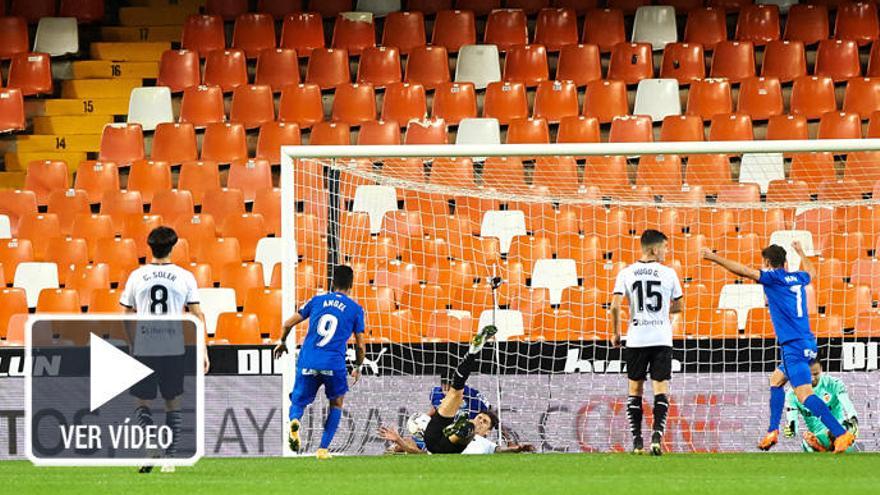 The Valencia and Getafe tied at two goals in a meeting that had a frantic end, since in the 88th minute the locals won 1-0 and in the following twelve minutes the Madrid team turned the scoreboard and in the last action of the clash Carlos Soler returned the equalized of penalty.

After three consecutive defeats, Valencia came out more concerned with defending well and of not receiving an early goal, as has been customary since the championship began. Getafe, well positioned on the pitch, put a lot of intensity into the game as usual in Jose Bordalás’ team.

As a result of that intensity, Getafe had a couple of clear chances to score but the protagonist in both was full-back Nico Olivera, who showed that his thing is more to defend than to shoot on goal.

The game was going on for about paths to the liking of Getafe but the panorama changed in the equator of the first half. A corner kick in favor of the Madrilenians ended with a rebound that fell to Musah’s boots, who with an advance control started a devilish race of 70 meters that culminated in 1-0.

The goal gave tranquility and encouraged Valencia. On a couple of occasions those of Javi Gracia tried to delve into the wound, but both teams went to rest without there being new variations on the scoreboard.

At the start of the second half, Bordalás tried to give his team a greater offensive bite with a couple of changes, although what really caused the total Azulona offensive was the absurd expulsion of Valencian side Thierry Correia, who saw two yellows in just five minutes for two unnecessary entries in the spinal cord.

Despite playing outnumbered Valencia was more comfortable than Getafe in the new dynamics of the meeting. The azulones showed very little clarity of ideas in attack, facilitating the defensive tasks of the Che team that even dared to brazenly seek the rival goal.

Bordalás saw it so unclear that he made a triple change so that his team opened the field more and played a rapture. Ángel was able to tie it with a shot from the edge that licked the post, but later Valencia had two very clear chances in just a couple of minutes. First it was Maxi who was entertained in the area and then Lato was the one who wasted a clear counterattack.

Getafe fell into despair with actions as fast as impreciseHowever, an error by goalkeeper Jaume to a distant shot from Arambarri allowed Cucho Hernández to head to goal and Gabriel could not get the shot and helped the ball enter the goal in the 88th minute.

In the minutes of extension both teams looked for the winning goal, Valencia had it but it was Getafe who would take the cat to the water first, after Angel caught a rebound from the post shot by Diaby. The victory seemed clear but in the last minute Maxi Gómez was brought down by Djene. Soler’s spirits did not tremble and he scored the equalizer in the 100th minute.

Incidents: Match corresponding to the eighth day of the League played at the Mestalla stadium without an audience. A minute’s silence was observed in memory of the historic utillero of the Valencia CF Bernardo Spain ‘Españeta’.