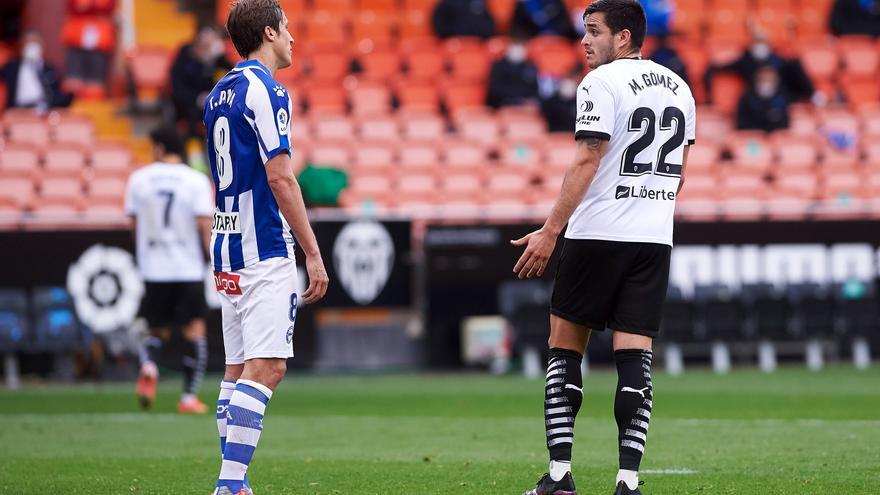 Valencia Y Alaves they added an insufficient point for your goals shared to achieve permanence in a duel in which the local team was superior during the first hour of play, but in which the Basque team woke up from then on and looked for the goal in a clash that until then had been more on the side of the local team.

Guidetti in minute 83 put the 0-1 on the scoreboard, just when his team played best, but Gayá balanced the score when Valencia more problems had.

The local team took the initiative in the initial section of the matchAlthough the most significant move was the goal disallowed, offside, to Alavés in a shot by Jota in which Edgar had crossed in an advanced position (m.10).

Valencia, with Guedes as the most prominent man, showed the intention of being the protagonist against an Alavés well planted on the pitch and that, although without excessive presence in attack, as the minutes passed he managed to level the process of the game. that was interrupted on many occasions by blows and clashes between players from both teams.

The ball was for the locals, but their arrivals at the goal of Alavés were not dangerous as a result of the difficulties that Javi Gracia’s team presented to put the Basque team’s rearguard into trouble.

Although in the last bars of the first half there were some arrivals to the goal of Pacheco in set pieces, Javi calleja’s team never saw the equalizer in jeopardy, although they had not shown any arguments to get ahead in the score.

The second half started with the same tonic, since Valencia handled the ball, but never managed to play near the goal of the Basque team until a great play by Guedes allowed him to give a death pass that no teammate reached (m.52).

It was the first flash of the match, before Gameiro’s goal was disallowed four minutes later for an offside by Maxi Gómez. Nothing changed after the second annulment of a goal decided by the VAR. Valencia maintained control of the game, but it was still difficult for them to reach the rival goal, so Alavés, without generating offensive actions, did not suffer from stress.

The first great chance for the visiting team came in the 66th minute in a great shot by Joselu that was neutralized by Jaume Doménech and that gave way to a phase of the match in which Alavés showed offensive arguments that were unheard of until then.

The foreign team managed to get hold of the ball, something that had not happened until then, and the sign of the game began to change with a lesser role for the local team. As a result of it, It was 0-1 and four minutes later Valencia replied with a draw that does not clarify its future and that gives more morale to Alavés than to the Mestalla as a whole.

Referee: Cuadra Fernández (Balearic committee). He admonished Gayà, Carlos Soler, Manu Vallejo, Hugo Guillamón and the delegate, David Rangel, for Valencia, and for Alavés coach Javi Calleja. He showed a direct red to the visitor Javi López when he was in the stands as a substitute.

Incidents: Match corresponding to the thirty-second day of LaLiga Santander played at Mestalla without an audience.